CONSTRUCTION and plant firms have been urged to join the newly launched Construction Watch Scotland, an alert platform designed to help fight crime including the theft of equipment and fuel.

The system, devised by Police Scotland and Neighbourhood Watch Scotland, will allow companies and individuals in the industry to sign up to a secure network which will send out intelligence on criminal activity to forewarn firms on what could be heading to their site.

A team will ensure that each member on the network is able to receive intelligence relating to their specific operations, as well as being able to communicate in a group-chat style with colleagues to alert them to suspicious activity.

In an interview with Project Plant, Michael Williams, asset and security advisor at Glasgow-headquartered hire specialist GAP Hire Solutions, labelled the system ‘invaluable’ and ‘gold dust’ to the industry, but warned that it is only as good as the information being put into it. So, the sign up of everyone – big or small – is ‘crucial’.

“Intelligence is absolutely key in the fight against criminals,” he explained. “People who are engaging in plant theft are organised (and) often coming from organised crime gangs. They do their homework and plan. We need to be able to fight back and the key is knowing what’s going on and knowing it in real time – or as close to real time as possible.”

Michael explained that GAP, in conjunction with the other national hire companies, have formed a Fraud and Security Forum through which they currently share intelligence on suspicious and criminal behaviour. However, he said Construction Watch Scotland will enhance the fight as it has the means to encompass everyone in the construction industries, as well as Police Scotland.

“If the criminals know we’re working together and doing something about it, they start to have doubts about how lucrative their activities are,” Michael added. “One thing I know from experience is these types of criminals hate people knowing about them; they love anonymity – things such as disguised number plates are used under the impression no one will find them, but the more knowledge the police and industry have, the more the criminals know they’re at risk. That then puts them on the back foot, and they’ll start to question if it is worthwhile.”

Stuart Ward, of Police Scotland, echoed Michael’s call for collaboration. The designing out crime manager said that the system is very similar to Rural Watch, which he explained has reduced crime on farms through intelligence sharing and criminals becoming aware that the agriculture sector is working together to notify each other of illegal and suspicious activities. 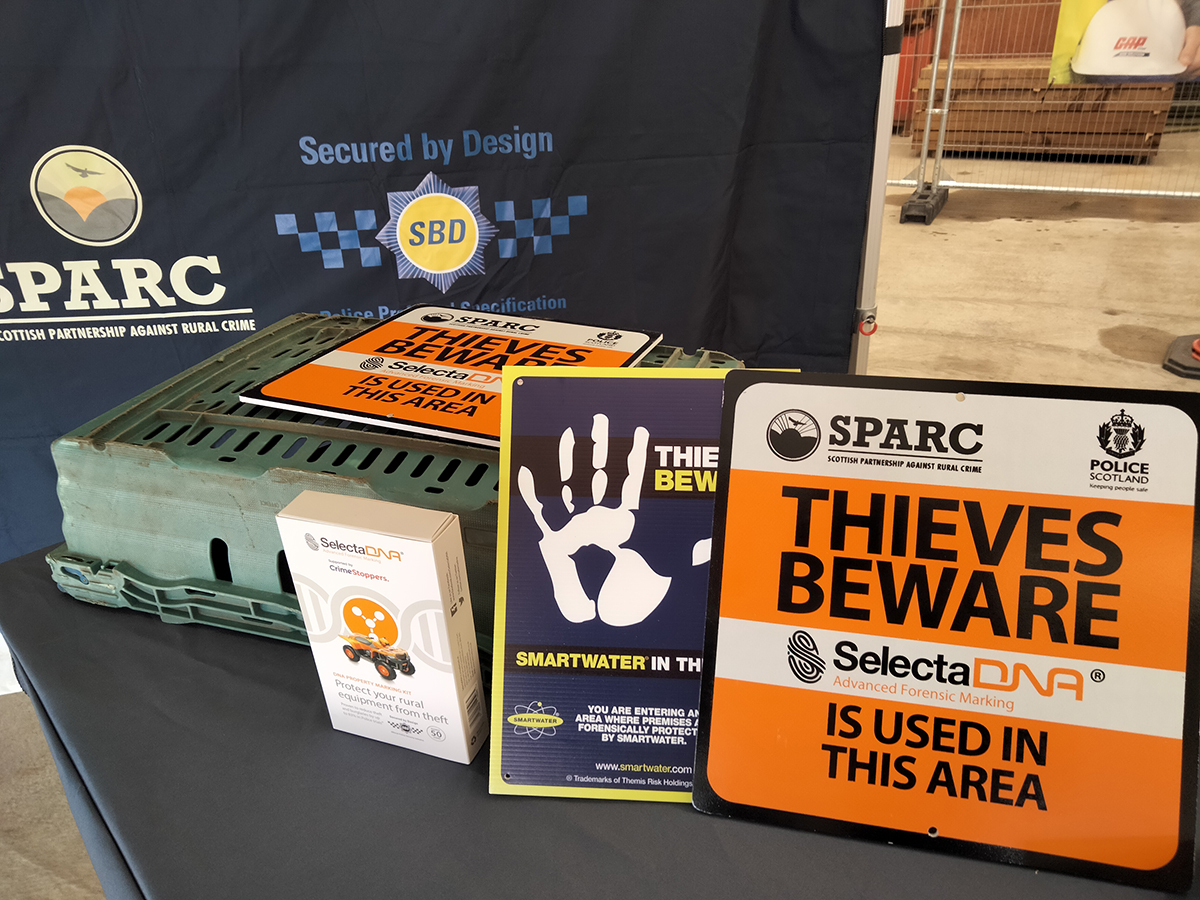 Stuart said the system comes at a time when theft and vandalism in the construction industry is costing Scottish firms £800 million each year, in what he said ‘simply isn’t sustainable’ – which has been shown in the already ‘massive appetite’ for the network.

“It’s not just the cost of the theft or damage that occurs when people go onto construction sites, there is a knock-on effect to contract timetables, on staffing levels and even confidence within the organisation that’s carrying out the works,” he added. “That can then impact on whether or not they get work in the future, or able to complete the job on time without penalties once the vandalism or thefts have been discovered.

“Once something has been stolen it needs to be replaced and that can take time – whether that’s plant machinery, tools or materials. So, reducing that opportunity for plant tools and materials to be stolen from sites will increase confidence in the building industry that they’re going to be able to carry out and get on with their jobs.”

Michael added to what Stuart said by explaining that plant theft can often be ‘really problematic’, particularly to smaller firms which can be left ‘extremely vulnerable’ to being replaced on contracts if the theft leads to a period of downtime. He added that GAP tracks its plant machinery and has a dedicated team which not only locates stolen machinery, but also advises on how to best prevent it from being stolen in the first place. He said they are ‘really keen’ to get this intel out on the network to ensure firms aren’t faced with such difficulties.

“Often, criminals won’t take machinery back to their own place – they’ll take it to somewhere they can strip it down so there’s no connection back to them,” Michael explained. “With tracking and Construction Watch Scotland, the industry can feed out not only the location of thefts, but where the criminals are then taking them out to – it’s another part of the jigsaw that allows police to know exactly what’s going on.”

Such technology is set to play a big part in the system, with Stuart revealing the importance of adapting to tackle the constantly evolving methods of criminals. To ensure this, the network will send out recommendations on products – accredited through Police Scotland’s Secure by Design system – that can help combat trends being experienced in certain areas.

This aspect of the network will provide particular relief to firms, Michael said, citing experiences of when GAP has had to update the firm’s own security amidst increased threats in areas or new methods of operandi – ultimately allowing them to relax during downtime knowing their assets are secure.

• In order to sign up to the scheme, visit www.constructionwatchscotland.co.uk