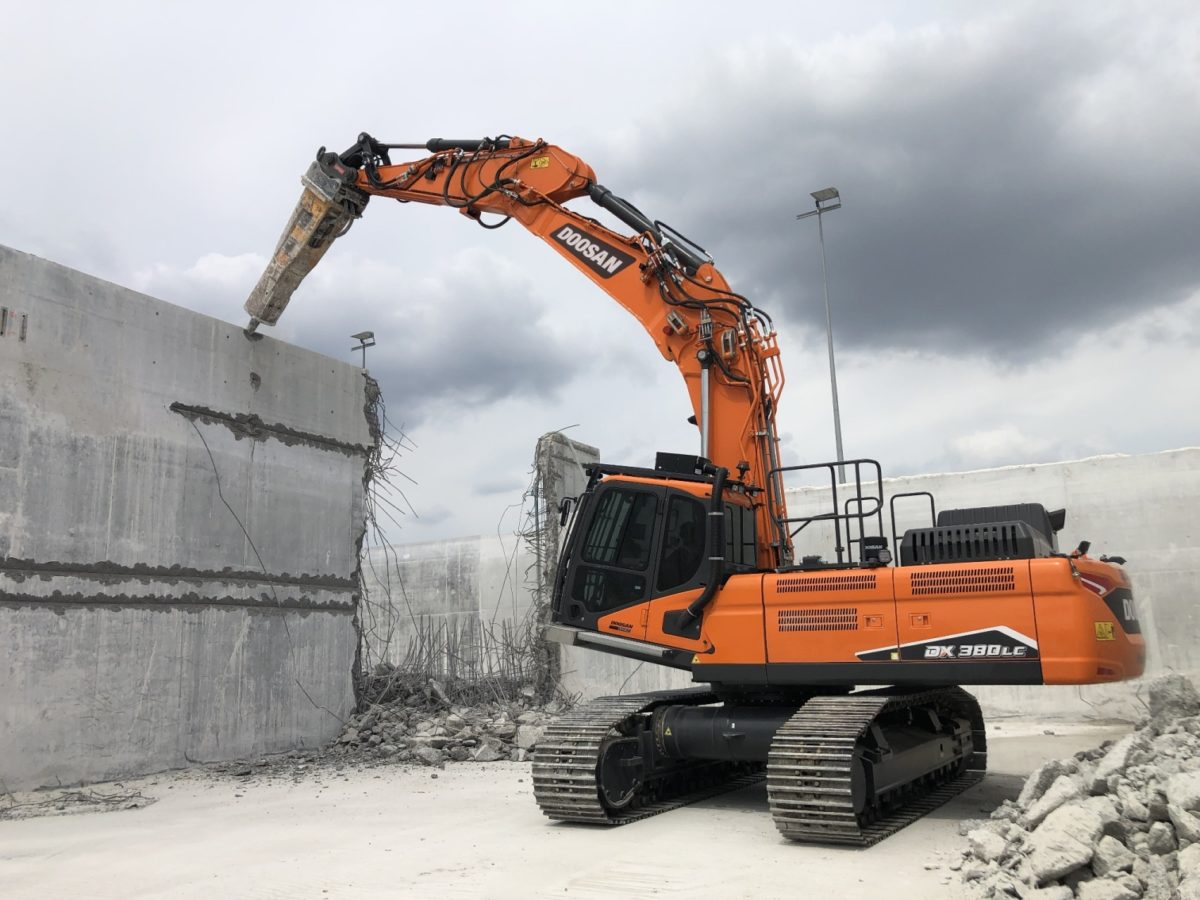 DOOSAN has announced that the arrival of the DX380DM-7 has completed the manufacturer’s range of new high reach demolition excavators.

The machine joins the existing DX235DM-5 and DX530DM-5 models launched in the past two years.

These are complemented by Doosan’s new range of material handler models, which comprise of the wheeled DX230WMH-5 and DX250WMH-5 and the tracked DX225MH-5.

In all of Doosan’s demolition excavators, the operator is housed in a tiltable cab, described as providing an ‘excellent environment’ particularly suited to high reach demolition applications, with a 30 degree tilting angle.

All three machines in the high reach range provide increased flexibility with a modular boom design and hydraulic lock mechanism. This, Doosan explained, facilitates an easy change between a demolition and an earthmoving boom to accomplish different types of work on the same project, using the same machine.

A stand has been provided to facilitate the boom changing operation, which is based on quick-change hydraulic and mechanical coupler connections. A cylinder-based system is used to push the locking pins into place.

All three models share a hydraulically adjustable undercarriage, which extends to a maximum width to provide ‘optimum’ stability on demolition sites. The width of the undercarriage can be retracted hydraulically to a narrow width position, for transporting the machines. Doosan revealed the adjusting mechanism is based on a permanently lubricated, internal cylinder design which minimises resistance during the movement and helps prevent damage to components.

On all the demolition excavators, standard safety features include a FOGS cabin guard, safety valves for the boom, intermediate boom and arm cylinders, and a stability warning system.

Doosan is now offering a choice of three different material handler models. The 23-tonne DX230WMH-5 and DX250WMH-5 25-tonne wheeled machines are based on Doosan’s DX210W-5 wheeled excavator. The new DX225MH-5 25-tonne crawler is based on the DX225LC-5 22-tonne excavator.

All three models have been designed for a range of material sorting and handling applications such as those in the scrap metal and other solid waste and recycling industries, as well as demolition, forestry and logging.

The DX230WMH-5 and DX250WMH-5 models have front and rear stabilizers, and a boom and arm designed for material handling tasks. A standard feature is the hydraulic cab riser, described as providing better all-around visibility of the attachment and work area.

The DX225MH-5 has factory-fitted features such as a 2.5m elevating cab, a 6.5m straight boom, a 4.5m droop nose arm, a counterweight, grapple-ready hydraulics, and additional guarding. The maximum pin height in the DX225MH-5 is 11.7m, the maximum operating reach is 10.6m, and the maximum working depth is 5.2m. The DX225MH-5 has two arm cylinders for extra balance and more stability and lesser movement when using attachments such as grapples.

An optional generator is available as a turnkey solution without requiring additional modification. An optional V-guard to protect the machine sides and components behind the doors is also available.