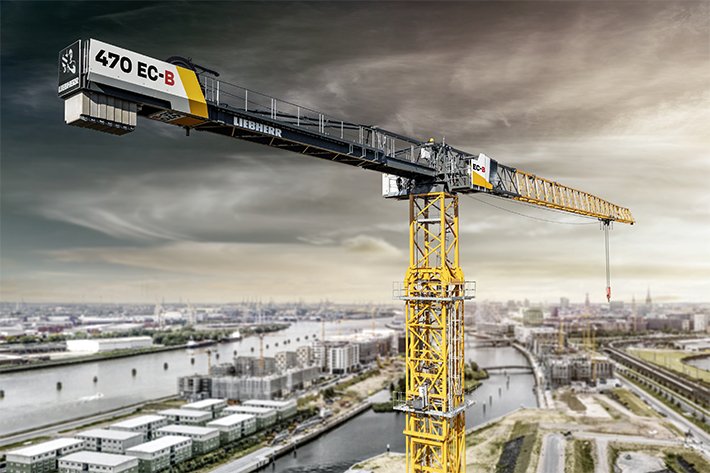 LIEBHERR has added a new flat-top crane to its EC-B series portfolio in the form of the 470 EC-B, which is available in both 16 and 20-tonne versions.

The manufacturer revealed the crane, with steel rope design, is now the largest in the ‘Tough Ones’ family.

To assist assembly and transport, Liebherr explained that the jib and counter-jib can be attached to the slewing platform ‘easily, conveniently and safely’. Only five trucks are needed to transport the slewing part with jib, including counter-ballast, to construction sites.

The top-slewing crane is available with one of three versions of the LiCAB crane operator’s cab: LiCAB Basic, LiCAB Air or LiCAB AirPlus. All three offer a floor space of more than two square metres, an ‘unrestricted view’ for precision lifting and an ergonomic control stand.

Also included in the cab is a 12-inch display screen with intuitive operability. The Tower Crane Operating System (TC-OS) provides operators with specific menus and a choice of languages.

LED advertising panel lighting can be configured. Liebherr said the panels don’t have to be mounted separately during assembly and can remain in place on the counter-jib end section during transport.

As they don’t have a tower head structure, several EC-B series flat-top cranes are able to work together on the same site, even in tight conditions.