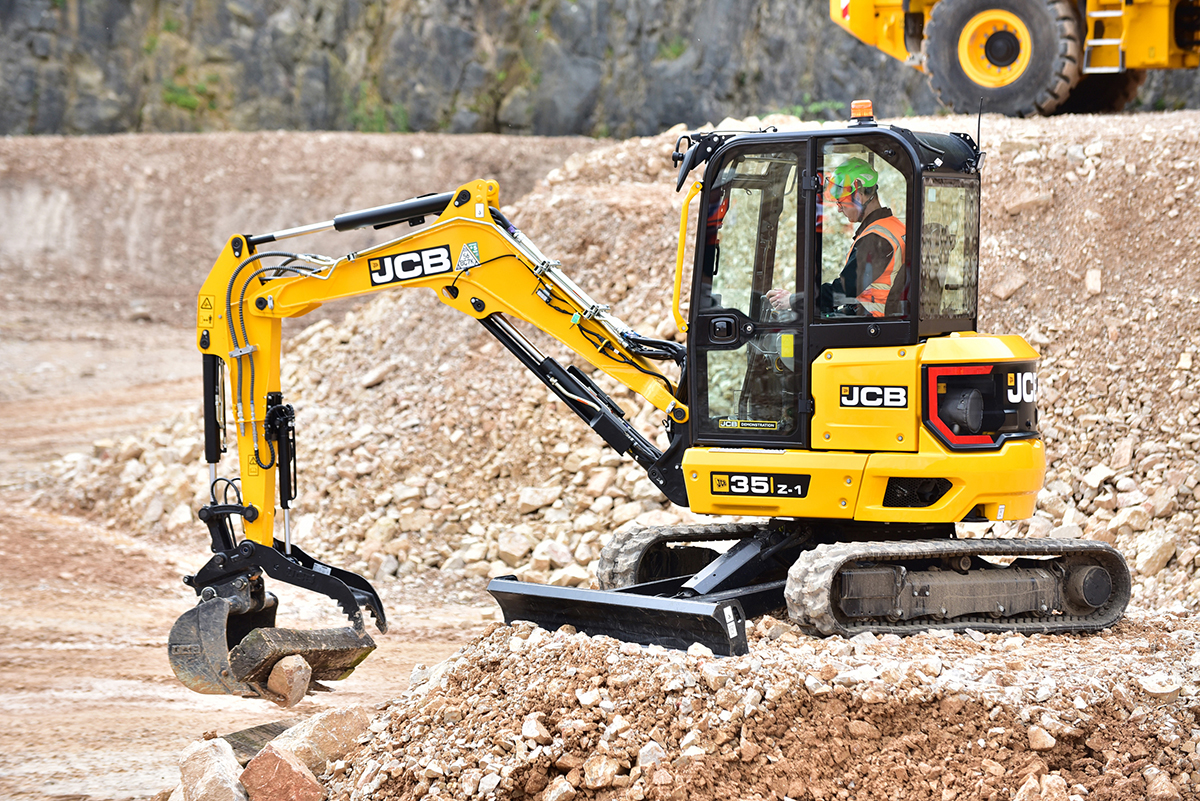 Dan Gilkes tests out the new 35Z-1 zero tailswing mini excavator, which is tipped to appeal to customers globally

WITH more than 15,000 sales a year, the 3.5-tonne compact excavator sector is the third largest mini market in Europe. To meet this growing demand from customers, JCB has updated its offering at this weight, with the launch of the 3.5-tonne 35Z-1 zero tailswing model and the 3.6-tonne 36C-1 conventional counterweight excavator.

The 35Z-1 replaces the 8035ZTS in the JCB line-up, adopting the more angular ‘Next Generation’ appearance already seen on larger models. Despite the increasing popularity of zero tailswing machines, the 36C-1 is a totally new model, with its conventional layout allowing increased reach, stability and lifting capability.

The two minis are powered by an 18.4kW (24.6hp) Perkins 403J-17 diesel engine. As it is under 19kW, this global motor meets both EU Stage V and EPA Tier 4 Final emissions levels, without the need for a Diesel Particulate Filter (DPF) or any other form of exhaust after-treatment. Though built to perform in the most stringently restricted territories, the Perkins unit is also capable of operating in Tier 3 countries, so can be used worldwide without any change.

It’s a quiet installation and the machines are equipped with an auto idle function that can be programmed through the main monitor control in the cab. The operator can set the auto idle to work after 2-30 seconds of lever inactivity, when it will automatically drop the engine speed to 1,400rpm.

If the left-hand servo pod is lifted, for the operator to exit the machine, the engine speeds falls further to 1,100rpm, while all hydraulic functions are isolated. The machines also have JCB’s 2Go safety system, meaning that the operator has to both lower the left-hand lever pod and press a switch on the right of the cab to activate the hydraulic system.

The 35Z-1 certainly seems to have plenty of digging power, easily filling its bucket in crushed rock stockpiles. Despite its zero tailswing layout, the 3.5-tonner feels very stable, even at full reach when working across the tracks. 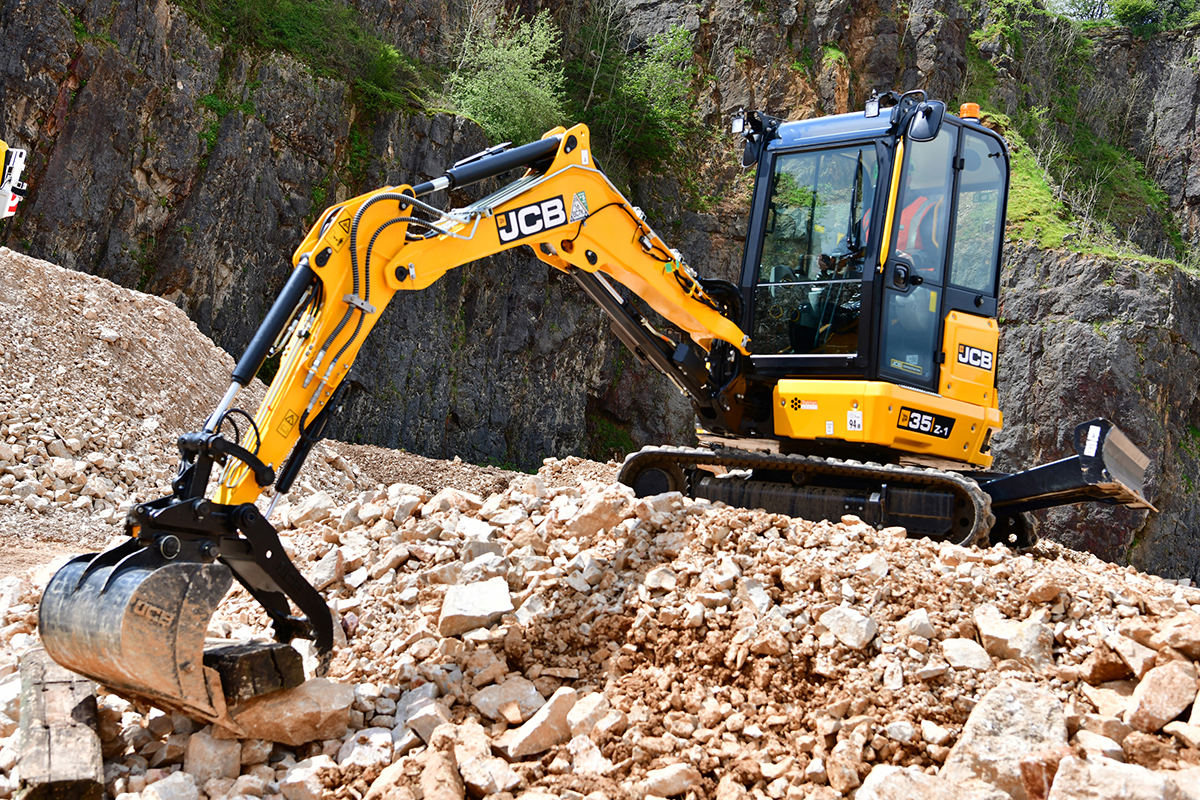 The Perkins engine drives a Bosch-Rexroth variable displacement, load-sensing, hydraulic pump, maximising productivity and performance. The hydraulic system is controlled through a closed-centre valve block, which delivers improved flow and controllability for the operator.

There are high-flow, electro-proportional double-acting auxiliary hydraulics as standard, delivering up to 70 litres/min of flow. The auxiliary circuits are controlled with a thumb roller on the right-hand servo lever. Double-acting low-flow auxiliary hydraulics can also be ordered, offering up to 30 litres/min of flow, controlled by a thumb roller in the left-hand lever. The changeover between single or double-acting hydraulics is now controlled by a switch in the cab, rather than the manual tap of the previous machine and the operator can select from 5-100% of flow to tailor the output to a range of attachments.

The hydraulic system is very smooth and it is easy to multi-function the levers, from bucket crowd, dipper arm crowd and main boom lift when digging. The system also allows very smooth grading, with no jerkiness as you draw the dipper arm in to level or grade a slope.

The two 3.5-tonne machines can be ordered with a cab or a canopy. Customers that opt for a cab can also choose between cab heating or air conditioning. Already seen on larger models in the range, the Next Generation cab offers plenty of space, with a clear, flat floor and a removable mat. With all auxiliary controls now moved to the servo levers, there are less pedals on the floor, increasing the amount of space available and the 3.5-tonne model feels like a class above in terms of cab space.

The excavators have a new 4” display monitor to the right of the operator, along with JCB’s now familiar membrane switch panel and two toggle switches to allow the operator to personalise what information is displayed on the monitor. You also get a rotary controller for the engine and hydraulic system output.

If the customer intends to use the machine for lifting and hose burst valves have been fitted, there is a Load Moment Indicator that can be shown on the screen too, to prevent overloading and stability issues. The cab also gets a Bluetooth radio, a 12 V socket and two USB ports for charging smartphones and other electrical devices.

The cab has bolt-on grab handles, making them easier to change if they get knocked on site and there are LED working lights with a follow-me-home function, that keeps the lights working briefly after the operator has left the cab, so they can safely move away from the machine at night. 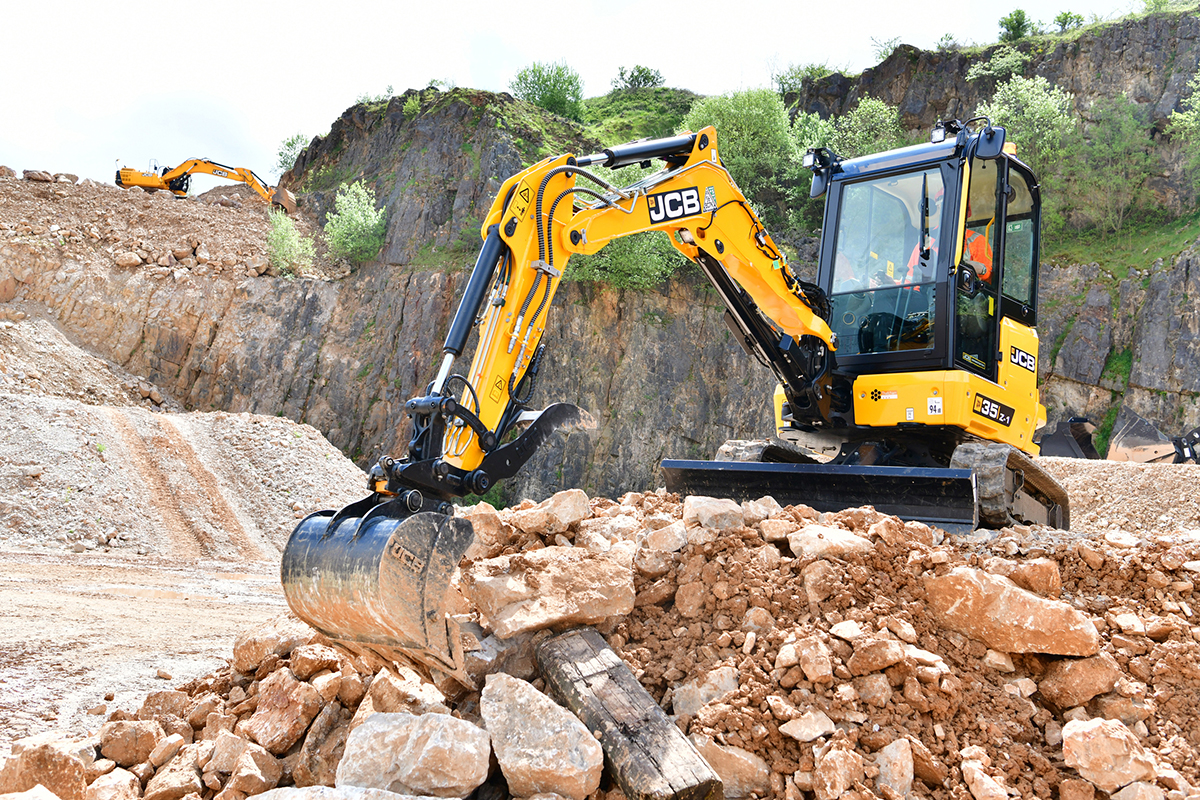 The 3.5-tonne minis have an H-frame undercarriage design for improved rigidity. An open centre section and sloping track frames also help to prevent spoil build-up within the undercarriage, while the track legs have chamfered sides to help muck to fall away. The two-speed Nachi track motors allow a top travel speed of 4.5km/h and they come with auto-kickdown, automatically changing to the lower drive range when the conditions get tough.

There is a new dozer blade, with a revised curve for improved roll of material and the dozer ram hoses now come with bulkhead connectors, so there is no need to change the entire length of hose in the event of a hydraulic leak of hose rupture. Dozer float is optional and customers can also order the machines with a four-way dozer if preferred. An electro-proportional dozer control is now standard, removing the larger lever, which can lead to fatigue.

At the digging end, the geometry has been refined to improve loading and lifting performance. Both machines share the same 2,450mm main boom and there are two dipper arms available, the larger of which requires the use of an additional 246kg of counterweight on the 35Z-1. The machines are now built thumb-ready, so customers can mount a thumb attachment on a plate on the underside of the dipper arm if required. This is already a popular option in the USA and is growing fast in Europe. The plate mounting means that there is no need for welding or drilling if the customer wants a thumb, making it easier to install.

All of the dig end and undercarriage pins now come with graphite-impregnated bronze bushes, extending regular greasing intervals to 500 hours and the kingpost now comes with re-bushable pivots, to further extend service life. JCB has revised its bucket pin geometry to allow customers to use buckets and pins from other popular manufacturers, making it easier to sell the machines into mixed fleets. There is a conversion hitch available for older JCB buckets and attachments. Customers can also specify a factory-fit hydraulic quick-hitch, featuring twin locking mechanisms and an LED boom-mounted warning light.

By offering two machines in place of the previous one at this weight, JCB’s dealers should appeal to a broader spread of customers, not just in Europe, but across the world. The fact that these excavators are powered by an engine that can be used across multiple emissions levels, will also help to grab sales in a range of territories.

The 35Z-1 is certainly an easy machine to drive, with a comfortable cab, plenty of engine and hydraulic power and the stability to make the most of its digging ability. Extended service requirements and all-steel bodywork should make the machines equally popular with owners.