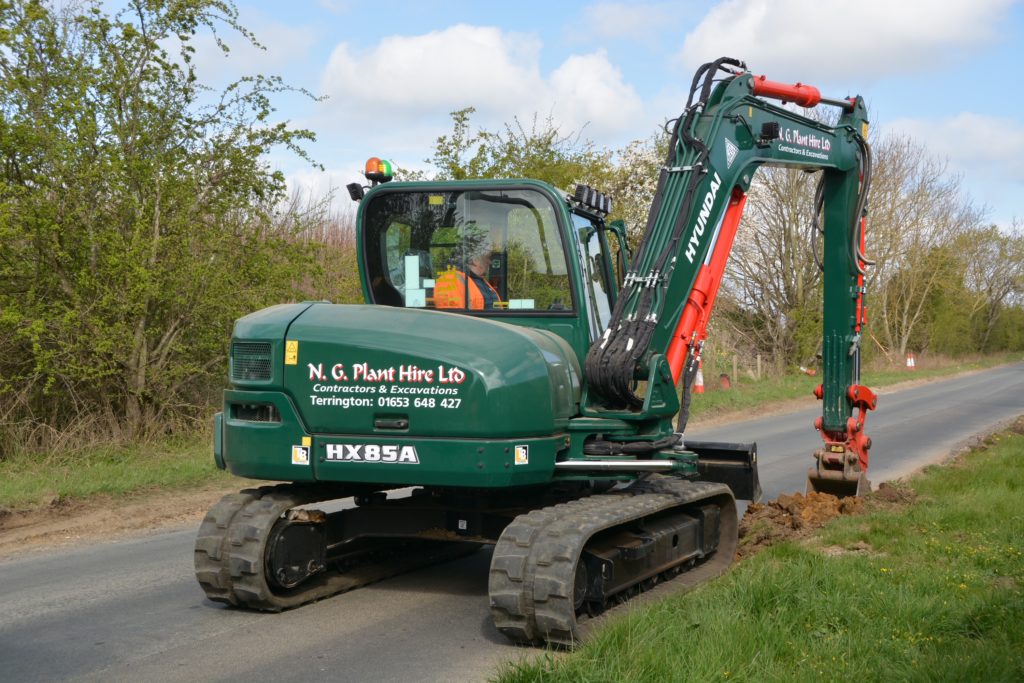 It was in 1994 that Nigel Gill’s father purchased the first Dash-2 Hyundai machine, the white cabbed Robex 130-2 model, which was the start of a long-term relationship with the brand.

In 2001 the business was effectively re-launched as N. G. Plant Hire Ltd when Nigel’s father retired. Around that time Nigel traded in his Robex 130-2 for the new Dash-3 model. More Hyundai machines followed over the years, culminating in the latest edition to the fleet, the HX85A, which has replaced an outgoing R 80CR-9A model and was supplied by Taylor & Braithwaite in a deal arranged by regional sales manager Chris Jordan.

Nigel Gill said, “This machine’s cab is so comfortable and spacious compared to older models. This machine also features the long dipper arm option too and also has the extra counterweight which makes her a well-balanced piece of kit. It’s a cracking little machine.”

Nigel chose to have the digger factory painted in a shade of British Racing Green with red detail as a tribute to his love of motorbike racing.

The Bosch-Rexroth variable displacement piston hydraulic pump is mounted to the nearside of the machine with the cooling packs to the offside of the engine bay. Nigel’s machine is fitted with the standard 450mm wide rubber tracks, but there are options for 450mm and 600mm steel tracks. Overall track length is 2,885mm while the track/dozer blade width is 2,300mm,. The Nabtesco track motors provide travel speeds ranging from 3.1 km/h to 5.1 km/h.

This machine has been supplied with the 2,100mm long dipper stick option, which when combined with the standard boom offers a reach at ground level of 7,280mm with a maximum digging depth of 7,420mm, which Hyundai explained could be increased by digging with the dozer blade behind and lowered down to its maximum position. Double-acting auxiliary hydraulic lines are fitted as standard for the running of hydraulic attachments such as breakers, compactors, and flail mowers.

Hyundai added that although the model is marketed as a conventional tail swing design, it only has a rear swing radius of around 1.60m.