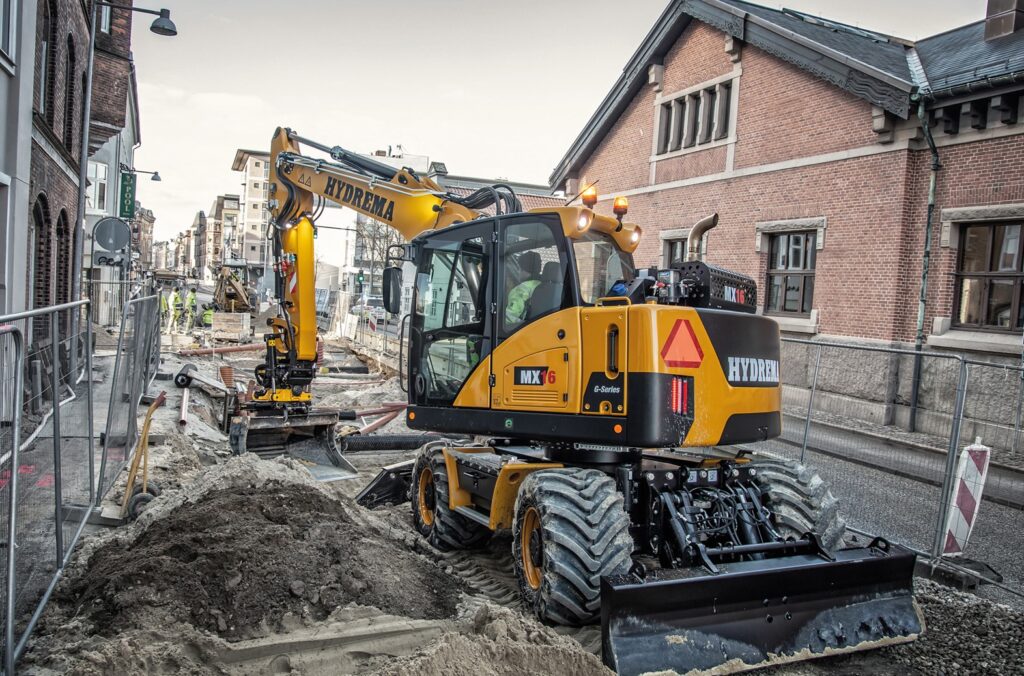 HYDREMA has announced ‘extensive upgrades’ to its MX G series of wheeled excavators, designed to increase power and torque.

The upgrades apply to the entire series of MX models, comprising the MX14, 16, 17 and 18 models, and the two specialist railway excavators, MX16 Rail and MX20 Rail.

The machines are all powered by a Cummins Stage V engine with 175 hp. The new engine has 780 Nm of maximum torque – 15% more than the previous generation.

Thorkil K. Iversen, Hydrema’s R&D manager, explained, “This means the excavator has 165 hp available at 1500 rpm, so most work can be carried out with the lowest possible fuel consumption while keeping noise levels low. Wheeled excavators traditionally use many different work tools. Therefore the combination of high engine power and the industry’s highest hydraulic output flow of up to 407 l. / min. (is) a real bonus. The large amount of available power allows Hydrema’s wheeled excavators to perform demanding work functions at lower revs. This gives them a special position in the market for compact wheeled excavators.”

Hydrema has re-engineered the slew function for smoother movements of the upper carriage. Angle sensors have been added, and new software is described as continuously adapting the hydraulics and slew braking function for all loads.

“We have refined the slew system to ensure smooth movements on slopes,” Iversen added. “The ‘Soft-Start’-function is a step-less transition from automatic slew brake to active slew of the upper carriage.”

The newly developed Hydrema Telematics is included as standard on the new MX G series. The system continuously collects data about vital parts including the engine, transmission and hydraulics. Information on aspects such as temperatures, oil pressure, fuel consumption and fuel level is displayed in the web portal or on the operator’s smartphone. Hydrema added that the system also collects error codes to ensure service and repairs can be performed as accurately and efficiently as possible.

“The machine software can also be remotely updated via the GSM network, which saves a physical visit from Hydrema service personnel,” Iversen said. “These functions and features ensure the machine owner the least possible downtime and most efficient operation. We have very high expectations for this brand new Telematics system.”