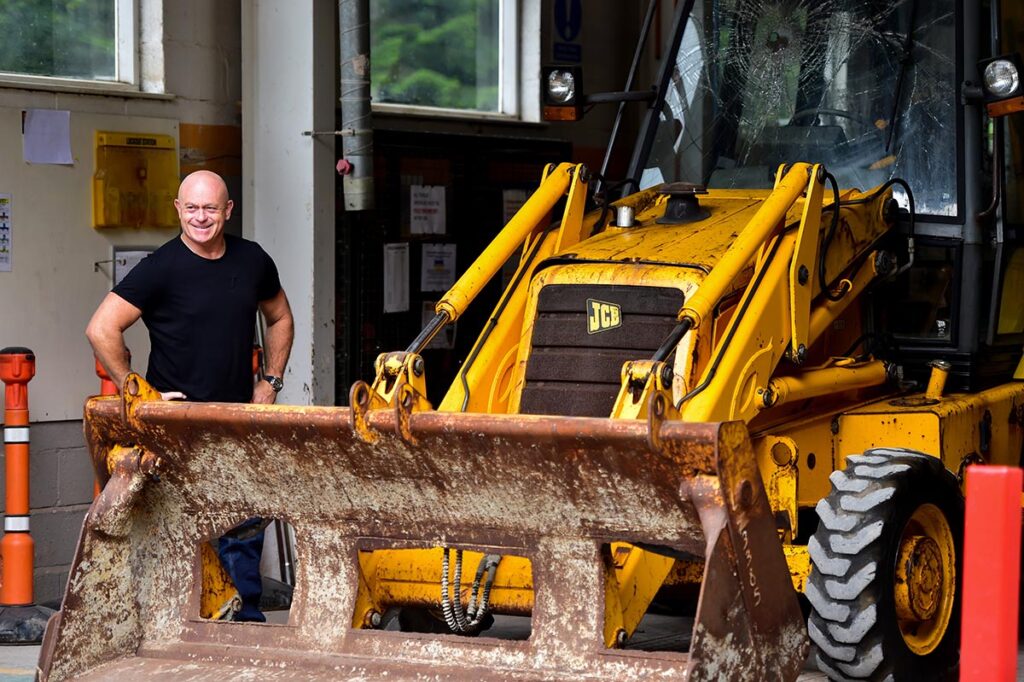 TV personality Ross Kemp had a brush with a JCB digger recently during filming for an ITV programme about an infamous robbery attempt.

The star visited JCB’s Staffordshire base during the making of a show to mark the 20th anniversary of an attempt to steal millions of pounds worth of diamonds from the Millennium Dome.

During the foiled robbery attempt, the thieves used a JCB 3CX backhoe loader to bulldoze the Dome’s perimeter fence and then crash through a boundary wall and into the money zone where the diamonds were on display.

Ross Kemp saw for himself the machine the thieves used – complete with modifications they made to execute their raid. He said, “It was absolutely fascinating to see the actual JCB machine the robbers used in the Millennium Dome raid because it is so central to the story the programme tells.”

JCB revealed that observers often think the hole in the windscreen of the digger results from a bullet but it was actually caused by heat from the bonnet-mounted exhaust pipe, which broke off and hit the windscreen as it crashed through the Dome wall. Because the front bucket was going to be raised in the air as the robbers bulldozed their way into the Dome, three holes were flame cut into it so they could see where they were going.

Six men were jailed in 2001 for their part in the robbery. The programme – called The Millennium Dome Heist with Ross Kemp – is broadcast on ITV1 on Wednesday, November 11th at 9pm.