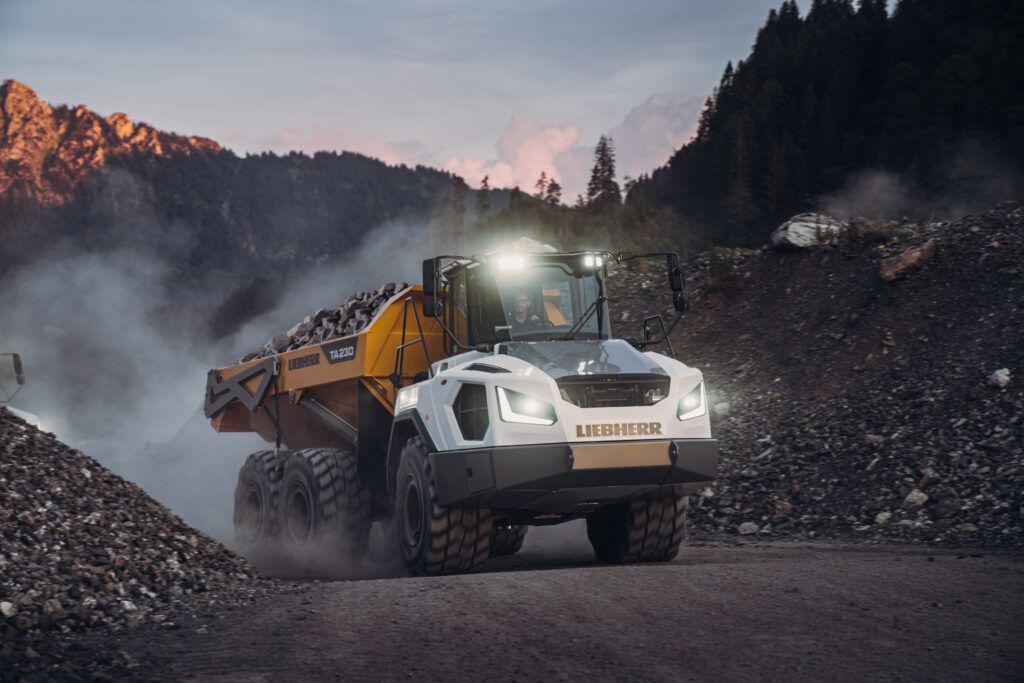 The TA 230 Litronic is described as an ‘extremely robust, powerful and all-terrain’ machine, which has been primarily designed for overburden transport and the mining industry. The ADTs can also be utilised on larger infrastructure projects and special applications, such as tunnel construction.

The trough of the new TA 230 Litronic is designed for effective transport of a 28-tonne payload. The front of the trough is straight and the sills are low so that loading with a wheel loader, for example, is easily possible across the entire length. Liebherr added that a standard weighing system shows the current payload during the loading process on the display in the operator’s cab. An optional loading light on both sides at the back of the cab shows the loading level outdoors.

To accelerate the release of material during unloading, the inner edges of the new trough are tapered. The two tipping cylinders at the side are described as giving the TA 230 Litronic high tipping pressure. Liebherr explained that the load can be tipped against the slope ‘easily and quickly’. During transportation, the long chute at the end of the trough ensures ‘minimal’ material loss. Trough volume can be increased with the optional tailgate.

The cab boasts panoramic windows and a short, inclined bonnet. There is a touch display with integrated rear cameras while various trays and storage spaces expand the available space. The offset steps and large driver’s door improve safe access to the cab.

The modern assist systems installed support the operator. Apart from a hill start assist, a speed assist is also available. With the hard stop function, the end position damping of the trough lifting cylinders can be activated or deactivated at the touch of a button. The trough lift is limited for work in a height-critical area with the aid of the height limit.

The speed-dependent steering provides additional comfort. Liebherr revealed that the adaptive steering system continuously adapts the ratio of the steering movements to the current speed.

The TA 230 Litronic automatically performs a daily check itself thanks to sensor technology. The machine runs through an inspection catalogue, where levels of engine oil, coolant and the central lubrication system are checked for the nominal state. Any deviations are shown on the display in the operator’s cab.