The schools will help alleviate overcrowding on existing campuses and help future-proof the districts as rapid residential development continues.

Franco Builders won the tender to prepare the building pads, as well as rebalance the soil across the entire campuses. “We have over a million truck yards of material to rebalance over each jobsite – it’s a massive undertaking,” explained Jose Zuniga, who founded Franco Builders along with Manuel Franco in 2002. Helping the team complete the work is a fleet of five Terex Trucks TA300 haulers, leased since March 2020 through local dealer Easton Sales and Rentals.

“We’ve rented TA300s from Easton for quite a few years now – we just fell in love with them,” Jose added. “We even rented some for the first few months on the Alvin job but we still have over a year of work to do on the site, so it made sense to switch to a lease agreement.”

Terex Trucks said its articulated haulers are renowned for ‘robustness’ and are ‘designed to go where others can’t follow’. The heavy-duty axles are capable of bearing large loads, while the drivetrain gear reduction and differential locks are said to help achieve traction in poor working conditions.

“We get a lot of rain in the Houston area and the off-road trucks have to fight through some pretty nasty terrain at times,” Jose added. “The TA300 is a steady machine with good traction. It doesn’t struggle to get in and out of the slope areas so there’s no risk of it getting stuck in a hole.

“The trucks have very little downtime and if they ever do have an issue, they are quick and easy to fix.”

The TA300 has built-in mechanisms to assist with service interventions. All test points are located at ground level, with the fully tilting cab and electronically raised hood ensuring easy access.

The three-stage aspiration air filtration is described as providing increased engine protection to lengthen maintenance intervals, while the hydraulic systems with magnetic suction filters guard against contamination and unscheduled maintenance.

Motherwell-headquartered Terex Trucks recently announced that the TA300 now incorporates a new transmission that the manufacturer said leads to a 5% improvement in fuel efficiency.

The articulated hauler is a popular choice on quarries, construction sites and infrastructure developments.

The TA300’s engine range is globally emissions compliant and meets the requirements of EU and North American legislation without the need for a diesel particulate filter (DPF). This is achieved via selective catalytic reduction (SCR) technology, combined with exhaust gas regeneration (EGR) and a variable geometry turbo (VGT). 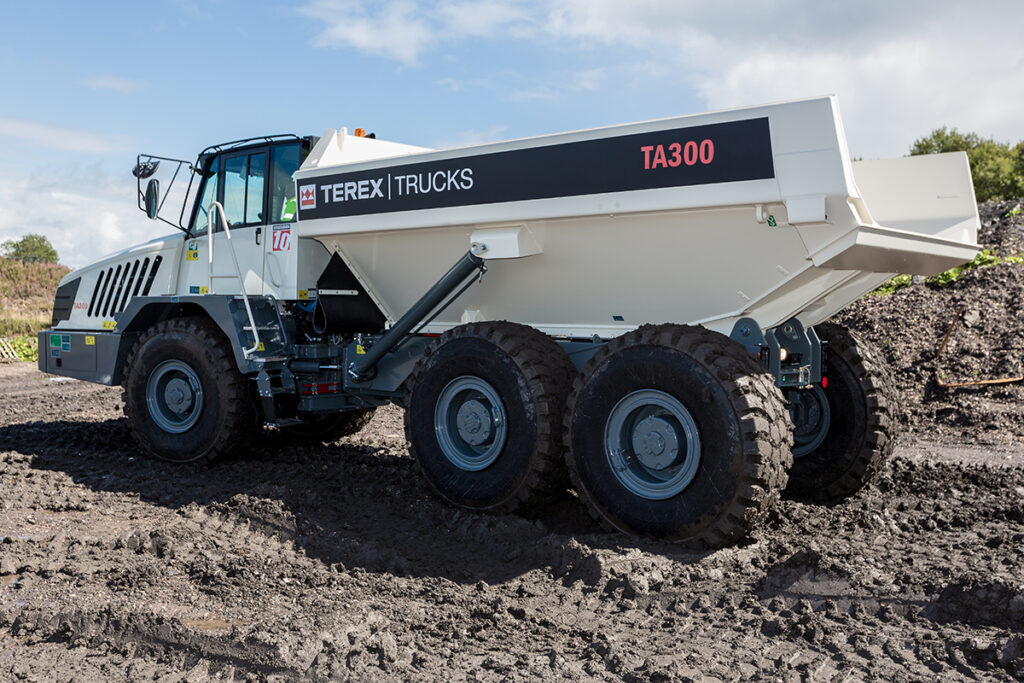 Since the end of last year, the TA300 has been manufactured with the latest EP320 transmission. Terex Trucks explained that customers can be ‘more productive, achieving faster cycle times, lower cost per tonne and reduced carbon emissions’.

The TA300 also now comes with long life transmission fluid, increasing the length of time between oil maintenance intervals from 1,000 to 4,000 hours.