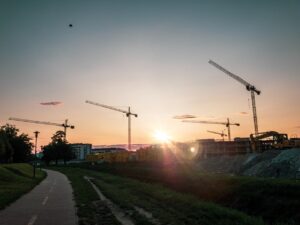 UNITE has written to construction firms to seek assurances that safety measures are in place to ensure crane drivers are not being placed at risk due to high temperatures.

The construction union has called for immediate action to be taken to support the workforce as temperatures look set to rise across the UK.

Unite said that it is common practice to allow construction workers to have extra breaks in hot temperatures, but added that this often does not apply to tower crane operators who they said only receive one break during a ten hour shift.

The union continued by saying that the ‘vast majority’ of cranes are not fitted with air conditioning, meaning that in hot weather they become ‘glorified greenhouses’ – thus putting operators at ‘extreme’ risk of suffering heat stress and undermining their ability to concentrate on the job.

Unite said it believes that all tower crane cabs should be fitted with air-conditioning but in the meantime the union is calling for the following minimum standards:

Unite national officer for construction Jerry Swain said, “It is imperative that crane operators are fully protected against extreme heat while at work.

“Unite has written to the largest construction contactors seeking assurances that minimum standards are in place to ensure that the health of tower crane operators is being protected.

“If a tower crane operator suffers from heat stress, not only is their own health being put at risk but if they are involved in an accident the entire site could be in danger.

“The long-term solution is for all tower crane cabs to be air conditioned. In the short term, drivers must receive additional breaks, which begin when they reach the canteen, a fridge or cooler is installed in the cab and sufficient quantities of bottled water are freely supplied.”