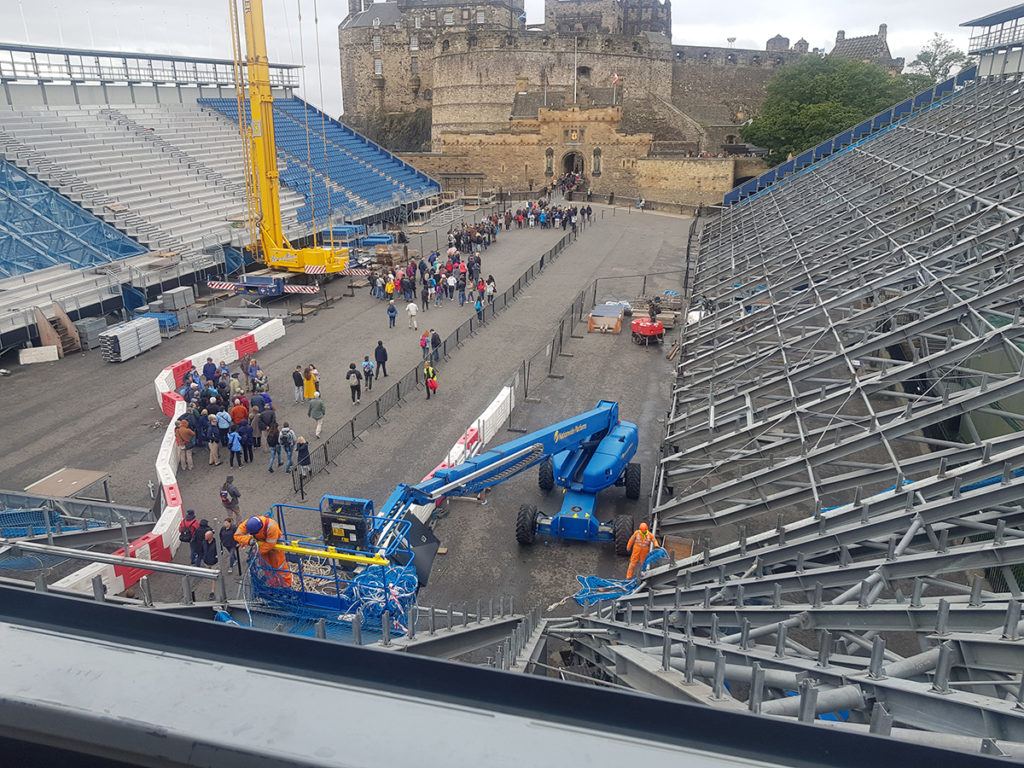 THE Royal Edinburgh Military Tattoo, held on the esplanade of Edinburgh Castle, attracts massive crowds on an annual basis.

Seating for spectators is provided by a specially erected grandstand. The installation of safety netting is part of its construction — a job performed by Peoples Safety using a Genie boom lift equipped with a Genie Lift Guard Fall Arrest Bar.

Peoples Safety contacted Nationwide Platforms in Broxburn to provide its team with the Fall Arrest Bar and a boom lift adapted to its needs. Installed on the basket of a 40.10m Genie SXTM-125 XCTM telescopic boom lift, Genie said the netting specialist’s operators confirmed that, having tested the product for the first time last summer, it proved to be better suited to this project.

Craig McKenna, Peoples Safety contract manager said, “As safety systems specialists, we are always interested in new solutions that allow us to work safely and more efficiently, particularly when they have been as rigorously tested as the Genie Lift Guard Fall Arrest Bar.

“As the first and only system of its kind to be officially certified as a Personal Protective Equipment, the Genie Lift Guard Fall Arrest system has the certification we need to respond to the HSE constraints of our daily work.

“With some 4,500m2 worth  of netting to rig in just five days, the Edinburgh Tattoo is a challenging project that provided a perfect opportunity for our team to really put the Genie Lift Guard Fall Arrest Bar to the test.”

With only three days to complete the grandstand, construction work demanded erecting a steel framework that was then covered by tiered boarding, which served as stair access and as a support for the installation of individual seating.

Craig McKenna added, “Although all our operators are fully certified and highly experienced, and even though they had already performed the task several times before, this job demands the ability to work at a very steady pace, often outside of the platform.

“In the past, our operators had found that the various forms of fall arrest systems that we were using were often inconvenient and slowed them down. This year, thanks to the self-retracting lanyard and sliding rail of the Genie Lift Guard Fall Arrest Bar system, our operators found that they were able to focus on their job while remaining safety attached without the hazard of tripping or being hindered by the inertia block and pendulum effect that they had experienced before using other fall arrest designs.

“They also benefited from a greater working area to move around in when outside the platform while staying constantly connected to the boom, which made the process easier and more comfortable.”