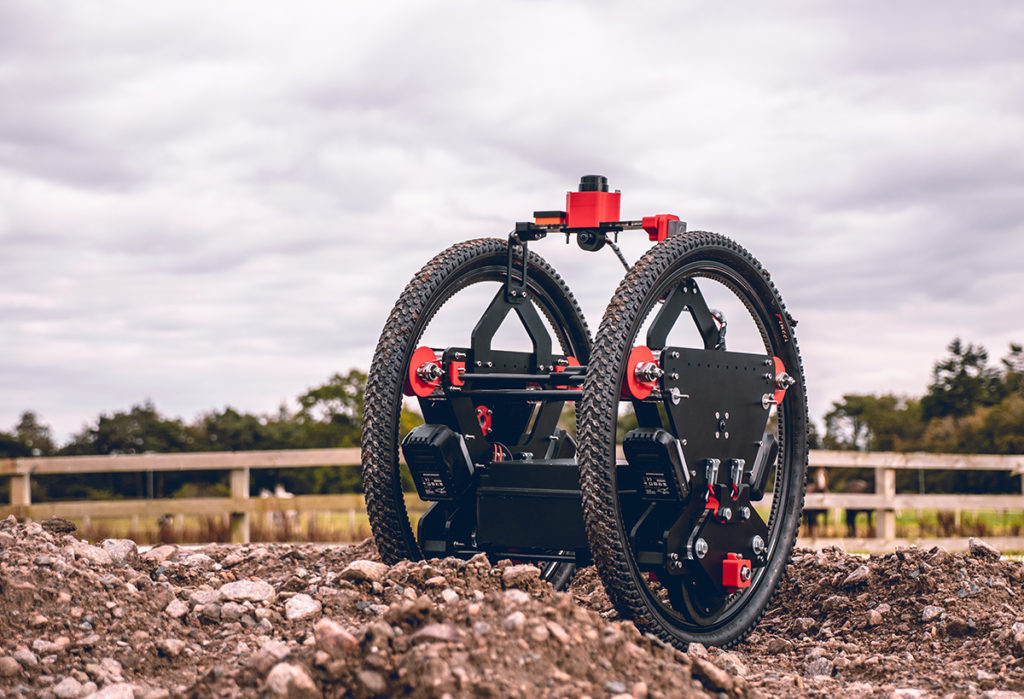 FROM being robbed 13 times to selling fruit smoothies outside of their university, the story of how two entrepreneurs from the same Zimbabwean school created a new mobile-security robot after meeting for the first time at an Edinburgh University, is no ordinary one.

“The technology was created by mistake, to be honest,” explained co-founder of Casta Spes Technologies, Selby Cary. “We were doing a Masters project at Heriot-Watt University and we were challenged to build a self-stabilising wheel, or rather a wheel that could balance itself – go round in a circle, travel over a wee hump, and prove that it can remain stable.”

Alongside his business partner, Michael McDonald, the graduates developed their university project into the ZIVA robot – a mobile sensory surveillance and inspection vehicle, with threat detection and facial recognition, honed for dynamic, harsh environments such as construction sites.

The pair first met at the Edinburgh Apprentice in 2015 – a student-run competition based on the popular television show. Their task was to showcase marketing, sales and management skills in a set of business venture related tasks, such as creating and manning a pop-up stall. The pair instantly struck a chord with each other – not least because, unbeknown to them, they had both attended the same Zimbabwean school.

Fast forward to 2017, and Casta Spes Technologies is founded – after winning the Edinburgh Apprentice and starting their first business, Helping Cups, advertising biodegradable coffee cups to Edinburgh businesses to secure it. Michael ditched a job dealing with high-end cars and Selby turned his back on a “dream” graduate-job, flipping a coin to start the company, the outcome he says he always wanted when the coin toss was made.

A grant was secured from The Scottish EDGE to kick-start the company. The simple self-stabilising wheel was transformed into an innovative security system – a bold move, but both founders had experienced traditional security methods fail during robberies while growing up in Zimbabwe, so perhaps a calculated one.

“It opens up the opportunity for a low-cost, covert, temporary security system that has imbedded machine vision – which means you don’t need expensive fixed infrastructure or constantly watch your CCTV cameras as it’ll alert you when something changes on site,” Selby said.

The robot is essentially two tyres suited for rough terrains, three high resolution cameras and an advanced computer system. The silent vehicle can undertake autonomous patrols of sites following randomised, but pre-programmed, routes at up to 19kmh – with security operators being able to manually control it when needed. The integrated intelligence system allows for it to identify threats and unknown vehicle number plates to instantly alert security guards.

“In the future, ZIVA will automatically go through a decision tree and tell you based on your security protocols. As a site manager, you can then decide what is a threat and what isn’t a threat. The robot will then analyse the information and use it to reduce the amount of false alarms – recognising the difference between a rabbit or a tree, rather than a human at 1am. Therefore, it will save a lot of time and money for security companies and operators who have to respond to these situations,” the 24-year-old added.

Selby revealed that they have worked with over 30 companies regarding the problem of false alarms and blind spots. “False alarms can lead to complacency. If security guards get used to hearing multiple alarms a day, that simply turn out to be a rabbit or fox, they will eventually ignore them,” he explained.

The security system starts at £1,000 per month, with the firm estimating a 92% minimum cost saving compared to traditional methods. Casta Spes offers a free one-month trial of their robots, with Selby acknowledging the reservations of businesses using such a novel system, especially one created by recent university graduates.

“I often think of a quote,  used by one of my advisors, ‘age is no guarantee of wisdom, and youth is no guarantee of innovation’ and I try to remember that there are individuals who are a lot smarter than us, that know a lot more about the security industry than we do. As such, we surround ourselves with very experienced and wise advisers from a range of fields, to help us plan ahead and provide their credibility for our products.”

The company currently has a hierarchy made up of experienced security experts including an ex-diplomat, Andrew Fulton. The robot has been backed by early stage technology accelerator, Seed Haus, and Scottish Enterprise, and is already completed initial trials with multiple companies including West Coast Capital Properties. There is no sign of let up, however, with Selby already making plans to upgrade the software on the vehicle and he is in discussion with top surveillance firms for a nationwide partnership.