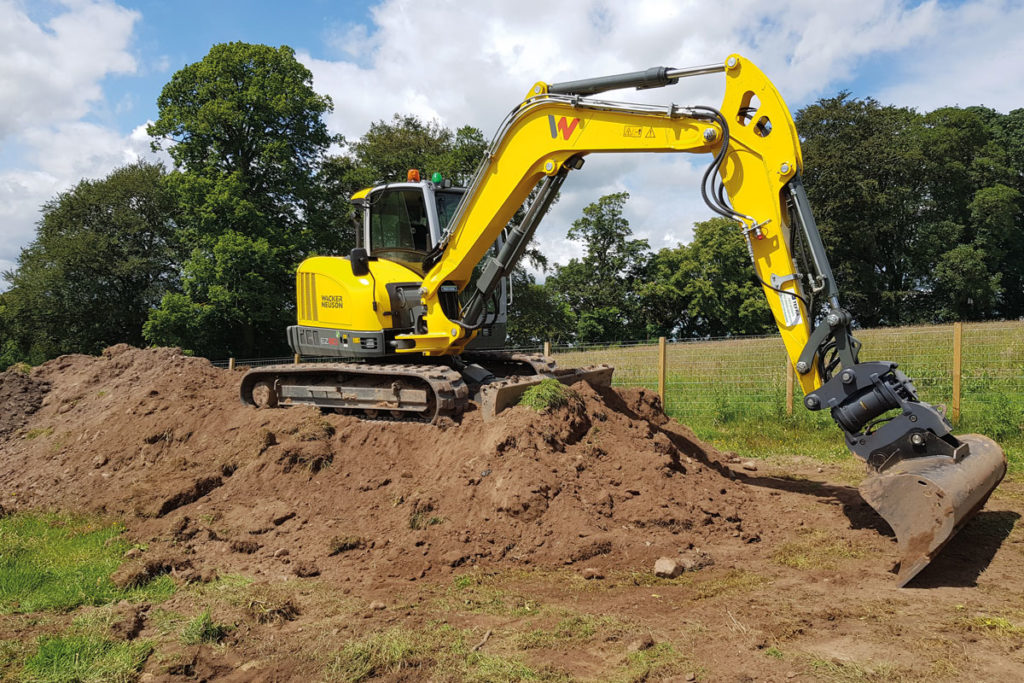 A Borders groundworks contractor has reportedly benefited from significant time savings since purchasing a Tefra Tilt.

Collins Plant and Groundworks (Collins PAG) is on its fourth Hill Engineering attachment, almost four years after MD Gary Collins was first introduced to the product. The firm has marked a major investment in plant with the purchase of two excavators, both specified with the Hill quick coupler.

A Wacker Neuson EZ36 – the first sale in Europe of the upgraded compact excavator with a new Tier IV engine – and EZ80 – the manufacturer’s biggest zero-tail excavator – were bought from the Lanark depot of the Hamilton Ross Group, specifically for the ‘additional flexibility’ on groundworks that the business has come to expect from the attachment.

Gary’s first purchase from Hamilton Ross was in 2016, in the shape of an ex-demo 8003 triple-boom Wacker Neuson which came with a standard hitch. It wasn’t long before the machine was re-fitted with a Tefra Tilt, which combines the Tefra coupler with an HKS extra-tilt power actuator.

Gary, who founded Collins PAG 15 years ago, has been using the latest additions to his plant fleet on a private pond project and a new car park for a wedding venue.

He said, “Operating an excavator without a tilting hitch is like having an arm without a wrist. You can pick up awkward loads without moving the machine which is a great time-saving benefit. You can also pick out exactly the material you want, and because of the angle at which you can work, it’s very effective for example if you are excavating strip founds or drainage tracks in soft ground you can grade an angle on both sides at the top of the dig, stopping material from falling back into the excavation, making it safe and easier to work.

“It isn’t just time saving, it’s also more accurate. You can also intermittently use a breaker in the vertical position which you can’t do with a rotating tilt. Factors like that I reckon give us a 20% time-saving, and over and above that, you are probably reducing the requirement for another man on the ground which you sometimes need when it comes to fine grading and trimming work.

“We have different operators on different machines all the time and the Tefra Tilt is a lot more user-friendly for less experienced operators. Although you can’t rotate your bucket or attachments, the difference in cost more than outweighs not having the rotating function for us and is not an issue. We can always uncouple the bucket, turn and reattach it as a face shovel if required. I would say a tilting hitch can be up to 60% as effective as a rotating tilt hitch and probably a similar percentage cheaper also.”

Brian Hamilton, sales and brand manager of the Hamilton Ross Group added, “The Hamilton Ross Group have worked with Hill Engineering for three years. If a customer asks for a hydraulic quick hitch, then we will fit a Hill Tefra hitch. The award-winning Tefra coupler and HKS extra-tilt power actuator has proven to be very popular with our customer base. We have found the flexibility of a 180° tilt has helped us offer business with more dynamic solutions for groundworks and renovation projects, and that the simple and hard-wearing design is what makes this product a market leader.”

New dealers aim to make Rototilt the ‘brand of choice’