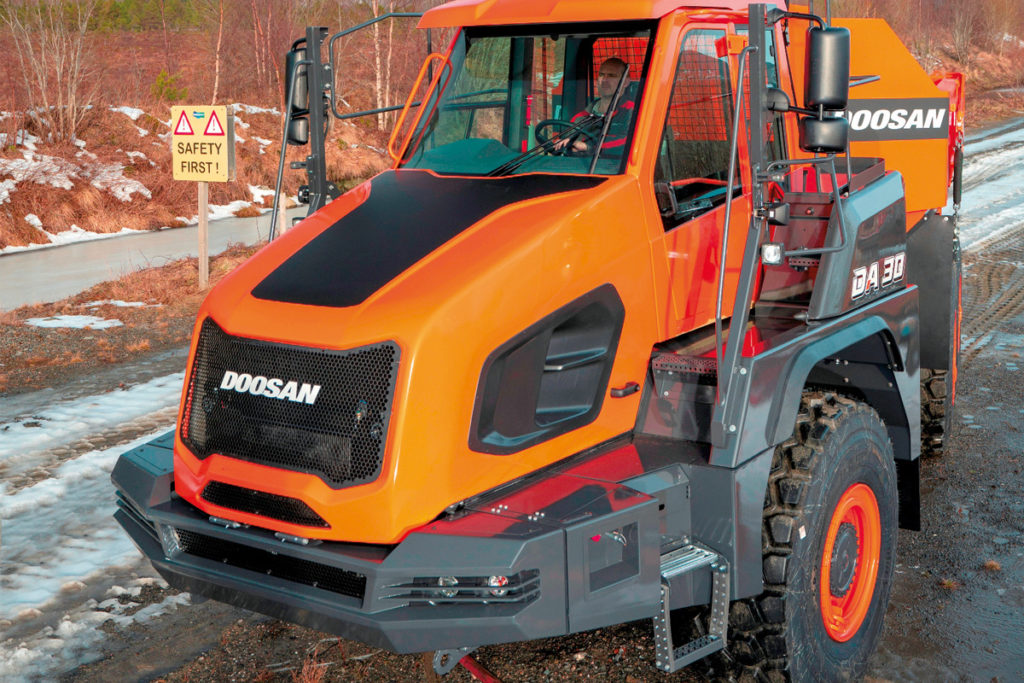 The machine is powered by the new Scania Stage V DC09 9 litre diesel engine, which the manufacturer said underwent two years of ‘very intensive’ testing. The main difference in the new engine is an improved after-treatment system.

Last year, the DA30 ADT was upgraded with new features including a new cab, new self-levelling front suspension, and new tandem bogie system. All of this is incorporated in the new Stage V model.

As well as these changes, the new model also boasts a new design for the front frame and bonnet components on the trucks. Described as a ‘dynamic’ look, Doosan said it reflects the ‘high performance, power and robustness’ of the ADT range and aligns more closely with rest of the firm’s equipment.

As well as the visual changes, there are a number of functional changes including a new positioning of the diesel and AdBlue tanks. The latter are now much lower than before, allowing operators to fill both tanks whilst standing next to the machine. The greasing system has also been relocated to make it more easily accessible from ground level, while space has been provided above the automatic lubrication system for additional grease cartridges and a filling pump. The transmission filters have been installed close to the greasing system.

A further safety feature is that the new DA30 is equipped with additional external round handrails. Inside the cab, there is an extra grip on the right hand side. The electronic and hydraulic systems have also been upgraded.

Like all Doosan ADTs, the latest model has an articulation hinge positioned behind the turning ring to provide equal weight distribution to the front axle – even during maximum steer articulation. Doosan said that this, combined with a free-swinging rear tandem bogie, ensures equal distribution of weight to each wheel and ‘guarantees permanent 6-wheel contact and drive for equal power distribution and excellent performance particularly on difficult terrains such as soft ground, uneven surfaces, very steep slopes, tight turns or a combination of all of these difficult conditions’.

Mecalac unveils new series of machines for the rail sector