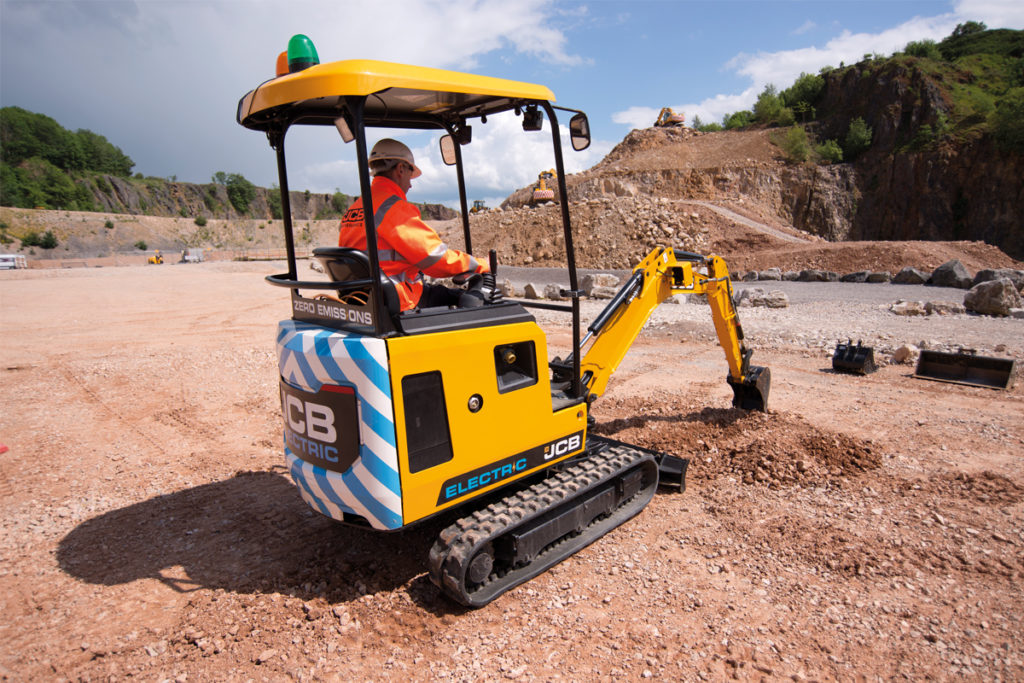 JCB has been at the forefront of the development of increasingly low emission diesel technology, with its growing range of Dieselmax and Ecomax engines. While diesel will remain essential for powering machines, the drive towards clean construction sites is seeing electric technology beginning to play a part, with JCB once again leading the way with the introduction of the E-TEC range of machines.

The company is no stranger to electric drive of course; it has had electric access platforms for some years and currently offers both traditional lead acid and lighter lithium-ion battery packs in a number of models. Even the recent announcement that JCB would create the world’s first electric Teletruk industrial forklift comes as little surprise, with the forklift market already boasting electric drive on masted models and customers used to charging and changing lead acid battery packs when required.

However, the 19C-1E mini excavator really is something new, offering a full electric, battery only 1.9-tonne mini excavator, with all of the performance and productivity of its diesel counterpart. Unlike some competitors, and in answer to customer response, there is no requirement for a power lead to run the machine. It can operate totally independently throughout a full working shift.

The 19C-1E is based on the firm’s high specification 1.9-tonne diesel model, simply replacing the diesel engine with an electric motor, to power the standard hydraulic system. The machine can be supplied with a choice of three or four lithium-ion batteries, using the latest Nissan automotive technology. These provide either 15kWh for three batteries or 20kWh of storage capacity with four batteries, which JCB claims is enough to work all day for the majority of mini excavator customers.

Indeed, in trials prior to the launch, customers who expected to experience ‘range anxiety’ were surprised by how much spare capacity was left in the battery packs at the end of the day. JCB’s own research, taking data from hundreds of machines using its LiveLink telematics system, also shows that most customers with a 1.9-tonne mini excavator don’t work the machine hard for eight hours a day. JCB’s testing and analysis has shown that the battery will not need to be replaced during the lifetime of the machine. 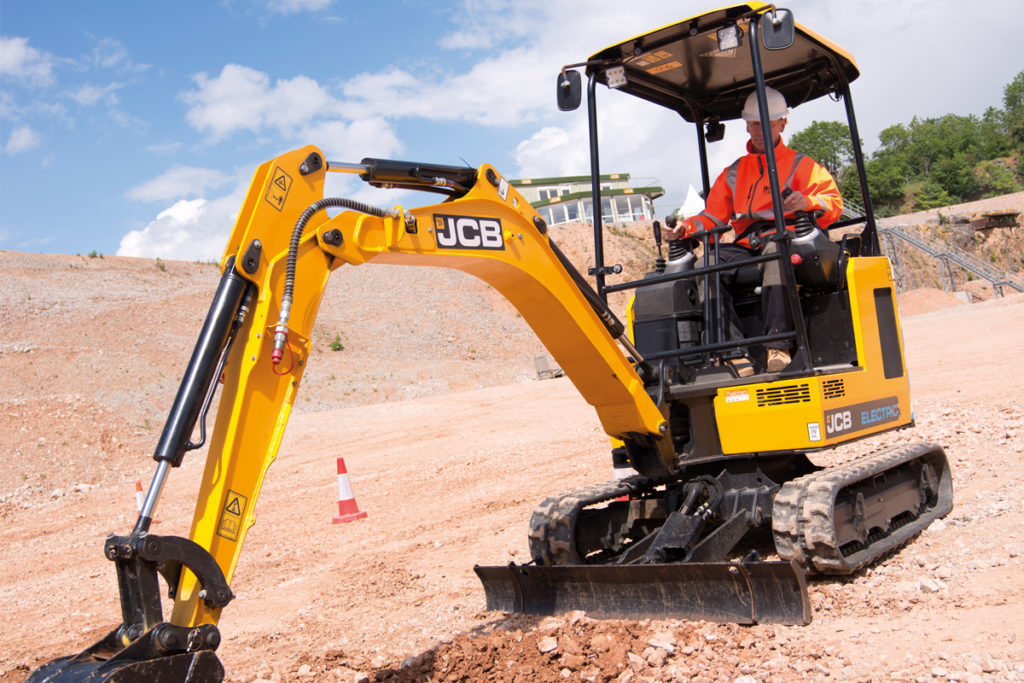 The machine can be supplied with either a 230V or a 110V industrial charge lead, to suit construction use. JCB chose not to opt for automotive style connectors, as they would be of little use on site. Using the 110V input, from a completely flat battery, the mini excavator can be recharged in under 12 hours. That can be reduced to an eight-hour charge time using 230V. An optional off-board fast-charging system will also be offered, delivering a full charge in less than two hours.

Anyone worried about running out of charge in the middle of the site should be reassured by the fact that the machine will warn the operator when there is just 10% of charge left. Testing has shown that this allows a further 30 minutes of use. At 5% charge, the machine will adopt a reduced power ‘limp home’ mode, to allow the operator to move to a charging position.

The 19C-1E uses a 48V electrical system to power the hydraulics, with a standard 12V battery under the bodywork to run ancillary equipment. It has the same Bosch-Rexroth load-sensing hydraulic system as the diesel machine, driven by a permanent magnet electric motor. This delivers identical performance and digging ability with a 32 litres/min auxiliary circuit for attachments. Indeed, early drives have shown that the electric machine is even slightly more productive, as the motor creates maximum torque from zero rpm and the electric motor doesn’t lug down in the way that a diesel engine can when the machine hits hard ground. It also feels totally natural when operating, as the hydraulic system is unchanged.

The 19C-1E has three operating modes, controlled by the traditional rotating speed control on the dash console. The lowest setting runs the electric motor at 1,200rpm, while in general mode it rotates at 1,600rpm. For heavy work there is a high mode that gets the motor spinning at 1,800rpm. The machine is also equipped with an Auto Kick-up feature for high-speed tracking, where the motor spins at 2,300rpm for maximum flow to the track motors.

The standard 19C-1 is a high specification mini and the electric model is equally well equipped. It comes with a ROPS/TOPS and FOGS certified canopy and a membrane switch pad to the right of the operator for lighting and other controls. The servo levers also get proportional rocker switches for auxiliary functions and for boom offset swing, keeping the cab floor clear for the operator.

Once in the operator’s seat, starting the machine is achieved by turning the key as normal, with a light on the dash showing that the motor is active. 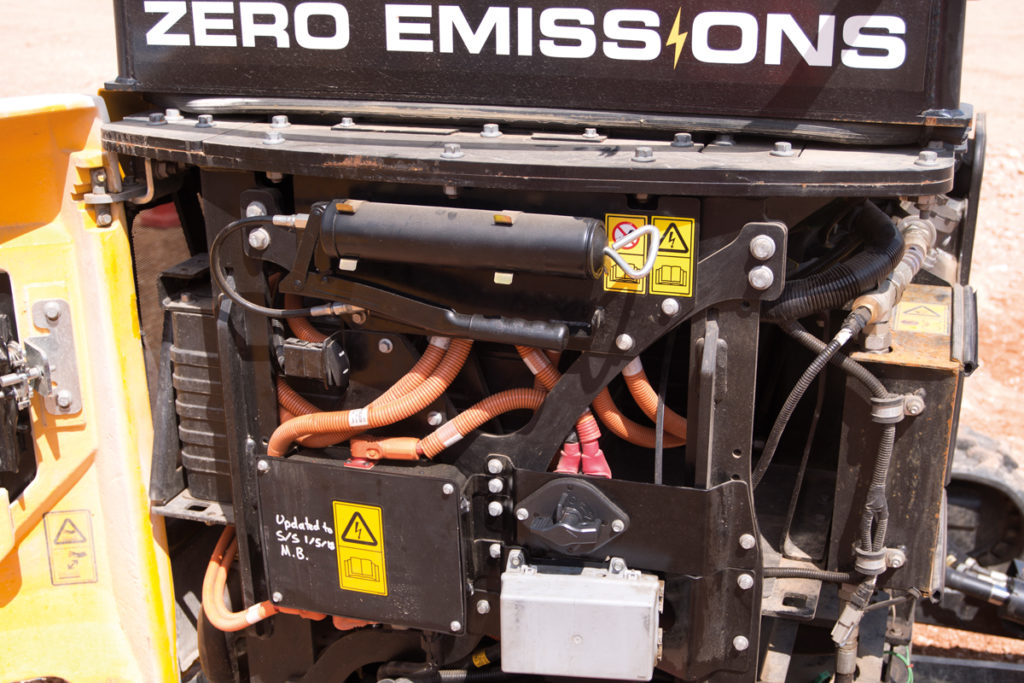 As with all JCB excavators the machine has the firm’s 2Go safety system, so the operator has to be seated with the seatbelt connected. They then have to press the 2Go button to make the servo levers active.

Then it’s simply a case of operating the machine like any other mini excavator. There is some hydraulic noise from beneath the bodywork, but the 19C-1E is said to be five times quieter than a diesel model and of course, it is zero emissions at the point of use. This should make it a popular choice with urban contractors, particularly those working overnight.

The lack of exhaust fumes will of course be the main point for many customers though. JCB admits that the machine will carry a premium over the equivalent diesel model, though customers should consider whole life costs. Running on electricity will invariably be cheaper than diesel, while service work is almost non-existent, limited to the normal hydraulic filter change and regular greasing. JCB is estimating service costs some 60-70% lower than for a comparative diesel model, while the estimated running cost for operators using an industrial electricity supply, will be around 50% lower than for diesel. That drops to 60% lower for a domestic user versus running on white diesel.

Cost aside, it would appear that there are plenty of customers already calling out for electric drive. This includes contractors that need to work inside buildings, plus firms involved in underground and rail work, where fume extraction equipment can make overnight possessions a costly business. The mini is also capable of handling all of the attachments that come with the regular diesel model, so demolition could be an option too.

Unlike electric car drivers, who have had to adapt the way they drive and refuel to suit their vehicles, the electric mini excavator operator has to make few changes to their daily work, other than plugging the machine in at night. The 19C-1E works just like its diesel counterpart and it will surely be just the first of many electric machines to come from JCB’s compact equipment division.