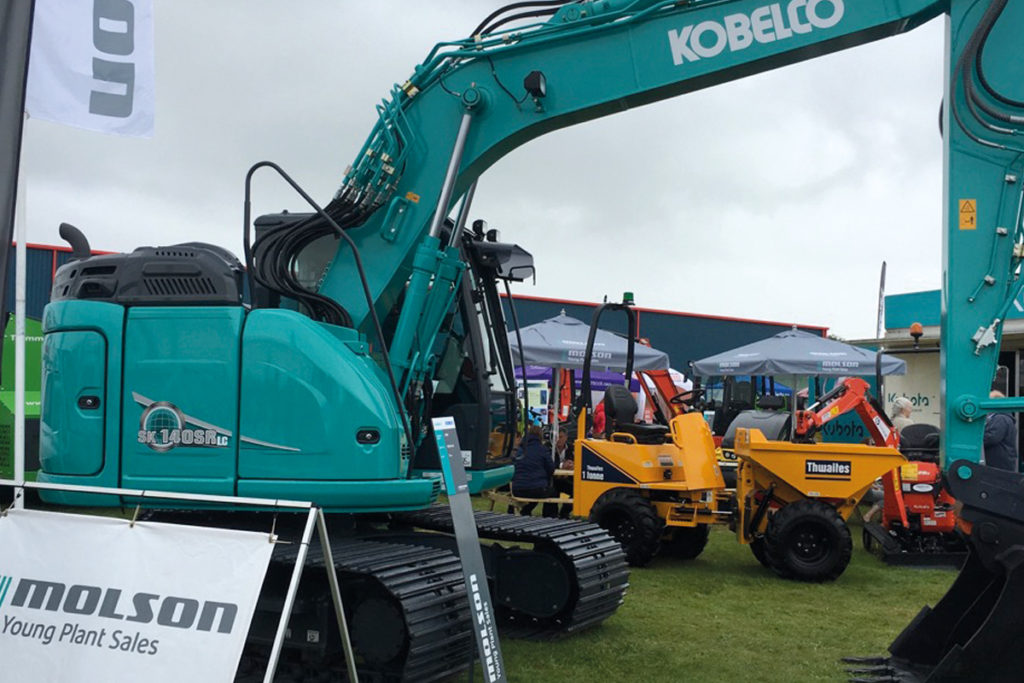 THIS year’s Black Isle Show once again featured standout construction machines from some of the world’s top manufacturers.

Equipment from the likes of Liebherr, Volvo, JCB, Case, Caterpillar, Doosan, Takeuchi, Kubota and Kobelco was displayed at the historic annual event, which has been going strong since 1836.

The show, held at Mannsfield Showground in Muir of Ord, is described as the largest agricultural show in the north of Scotland and has a reputation as a family event, complete with fairground rides, music and performers.

The construction equipment aspect of the show has been growing over the years, as demonstrated by the number of manufacturers and dealers in attendance.

Also in attendance was Molson Young Plant Sales, which opened its first Highland depot last year. The firm was displaying products from the likes of Kubota, Kobelco, Thwaites and Bomag.

Head of sales Mark Proudfoot said the addition of a depot in the Highlands is providing positive results for both the business and customers. “We’ve got a customer base that’s in and around this area,” he explained. “We’ve got genuinely great service. We’ve now got an engineer on board, we’ve got a service manager, there’s a new salesman coming on board in the next few weeks. The nucleus of the business is there. People are saying it’s good to see another business opening up that can provide something different.”

Mark described the family element of the Black Isle Show as “absolutely phenomenal”. “You’ll find that all our machines are open for mothers, fathers and kids to jump in and have a shot,” he revealed.

For Callum Mackintosh, founder of HHH Equipment, the event has extra significance as he’s been attending since he was a child. Callum was promoting Rototilt models, with the Scottish’s market’s thirst for tiltrotators showing no signs of slowing down.

“We’re making big strides into getting Rototilt pushed into the Scottish market,” he told Project Plant. “(Feedback has been) great quality of service, reliability, and value for money. It’s not about price. Customers are telling us they’re getting value for money buying a Rototilt.”

Reflecting on the show, Callum added, “It’s very important for the Highlands. It gives everybody a great chance to come and gather to see all the equipment and all the suppliers and manufacturers in the one place.

“We’ve been exhibiting for five years but I’ve been coming to this show since I was a wee boy. I’ve seen the construction side certainly grow and now you look around, it’s almost a 50/50 split between agri and construction. It’s well supported right the way through to manufacturer level. It’s a great show and for me, it’s my local show; it’s my home show and I’m only too happy to support it.”