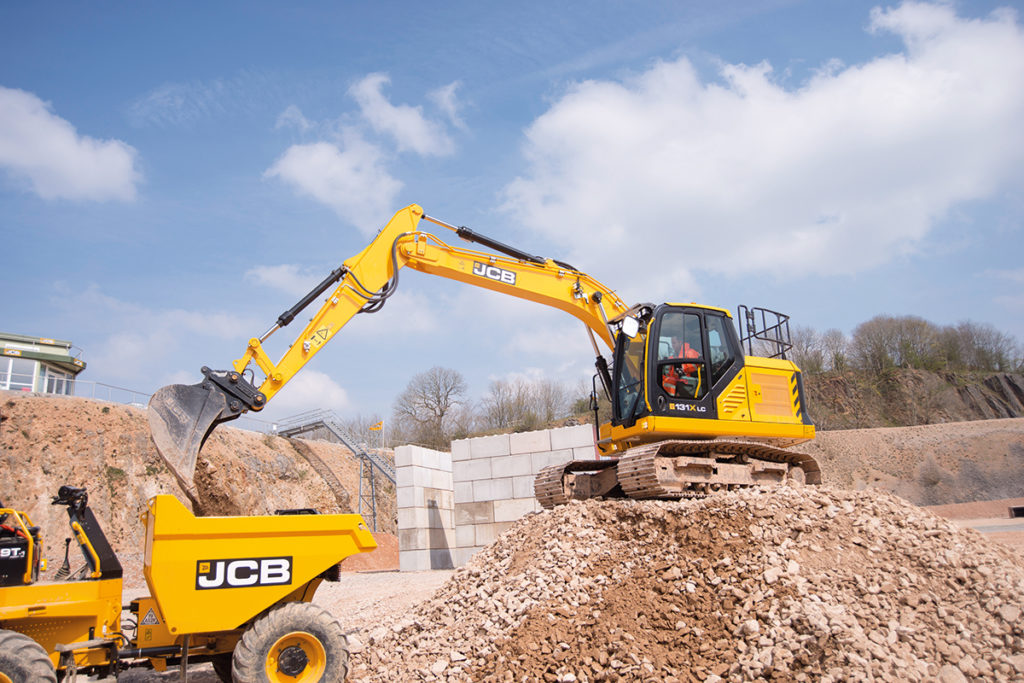 JCB has taken a major step forward with the launch of the X Series of crawler excavators. With a purposeful, robust appearance, the X Series machines represent a major advance, in terms of performance, durability and ease of operation.

Just last year, JCB moved the game on with the launch of the 210X and 220X, the first machines in a totally new line-up of X Series models. Now they have been joined by three 13-16 tonne models, which cater directly for the needs of the all-important groundworks sector, taking this most popular class of the UK excavator market to a new level.

The 13-16 tonne market is the biggest single sector for UK buyers, making up around 60% of all the tracked machines sold across the UK. With that in mind, JCB has built three distinct machines within the class, to cater for all customer needs.

The 131X, 140X and 150X excavators are direct replacements for the previous JS131, JS130 and JS145 models. The 140X and 150X continue to be powered by an 81kW (108hp) JCB engine, for those looking for ultimate digging performance. However, the 131X uses JCB’s plant hire-friendly 55kW (74hp) EcoMAX engine, which meets Tier 4 Final emissions levels without the need for a Diesel Particulate Filter (DPF) or after treatment such as Selective Catalytic Reduction (SCR).

That means that hire companies don’t have to worry about DPF regeneration or ensuring that customers refill the AdBlue tank. 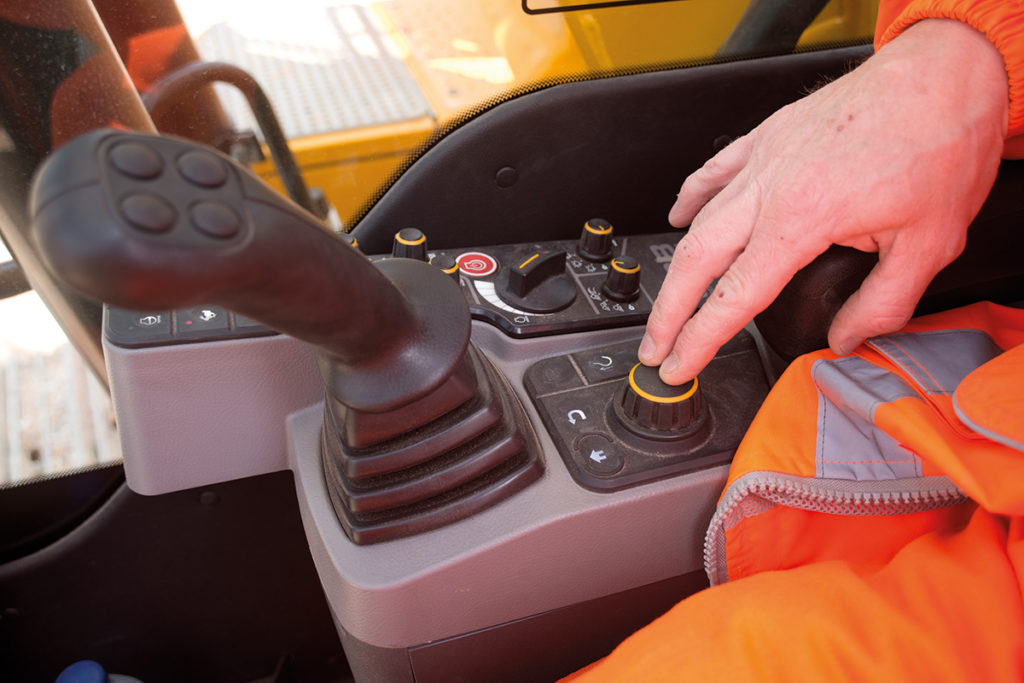 In operation, unless you are in some particularly difficult ground, it is doubtful that many operators would notice the difference in engine outputs, as the 55kW engine in the 131X provides plenty of low-down lugging power. Certainly, in general trenching, batter work and even lifting operations, the machine has more than enough under the engine canopy to meet the need.

The three machines take on the sturdy X Series appearance, with fuel and hydraulic tanks now mounted inside secondary body panels and all access doors double-skinned and zinc-plated for improved durability. The hydraulic tank also includes a new baffle system to reduce oil aeration. Partly due to this, the machines get a 2,000-hour hydraulic filter life, up from 1,000-hours on the previous JS models.

A robust counterweight gives the X Series machines a striking appearance, but has actually been designed to prevent scratches and damage to paintwork. It comes with easily repairable ‘strike points’ at the corners and along the lower edge of the upperstructure, reducing the risk of damage and the potential cost of cosmetic repairs for hire firms. However, where the 220X has a smooth counterweight with JCB decal, the smaller models do have the JCB logo cast into the metal, which may not find favour with companies that want to have their own name across the back of the excavator.

Unlike some competitive machines, the operator can see over the counterweight and engine canopy from inside the cab, though a rear-view camera is a part of the standard specification. The upperstructure is covered in non-slip metalwork for added safety, though that full ‘boxing ring’ is an option.

Talking of which, the X Series models can be ordered with heavy-duty belly plates, side impact protection and a heavy-duty dipper arm with wear plates, if required for more arduous work. Customers opting for the heavy-duty kit would probably go with the higher engine output too though. There is also the option of a dozer on all three of the 13-16 tonne machines, increasing versatility on site. 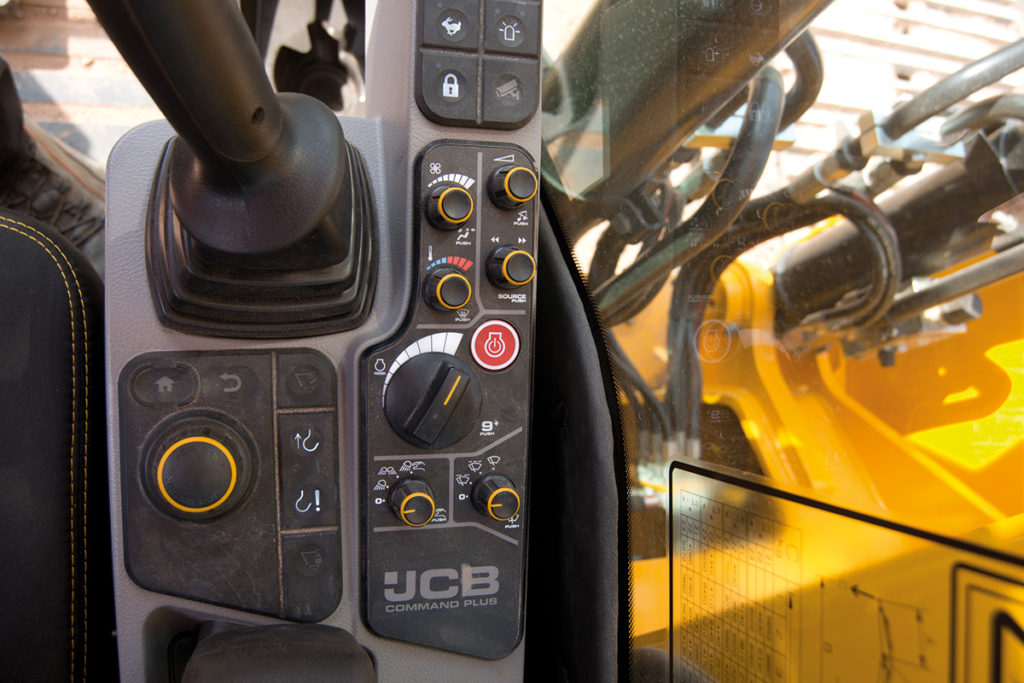 At a full 2.5m wide, the 131X is 80mm wider than the previous JS model. This has allowed JCB to fit the same CommandPlus cab as the larger 220X, which is located on four isolating hydraulic cab mounts to reduce noise and vibration. These contribute to a commendably low 67dB(A) internal noise level, which is a full 6dB(A) lower than the previous JS130.

The cab itself is 15% larger than on the JS and it incorporates the ROPS frame within its structure, so there is no blocking of visibility. Flat glazing all round makes it easy to replace a damaged window if necessary.

There are three comfortable Grammer seats on offer, with the top specification offering heating and cooling. Surprisingly, this has already become the most popular choice on the larger 220X, though the plant hire mix may see that reduced on the 131X. The servo levers are mounted on the seat frames, so move with the seat suspension, making it easier to control the excavator on rough ground. A new command pod to the right of the seat brings together all of the switches and controls in a single unit, while a 7” monitor at the front can be accessed through an automotive-style rotary controller. Operators can tailor the information on the monitor to suit their needs and it can also be used to view the rear-view and optional side cameras. For those companies taking the optional 360° camera, a second screen can be added in the cab.

While most of the upper bodywork and the cab are new, the excavators use the same undercarriages, booms and dipper arms as before, though the more powerful 81kW models do now come with a larger bucket cylinder to deliver an 11% increase in bucket tearout force. The higher-powered models also get a larger hydraulic pump, that can run at lower engine rpm, contributing to a 6% improvement in fuel per tonne productivity. As mentioned though, the 131X feels like it has plenty of power for most operations and few companies will use a 13-tonne excavator for a major muckshift. 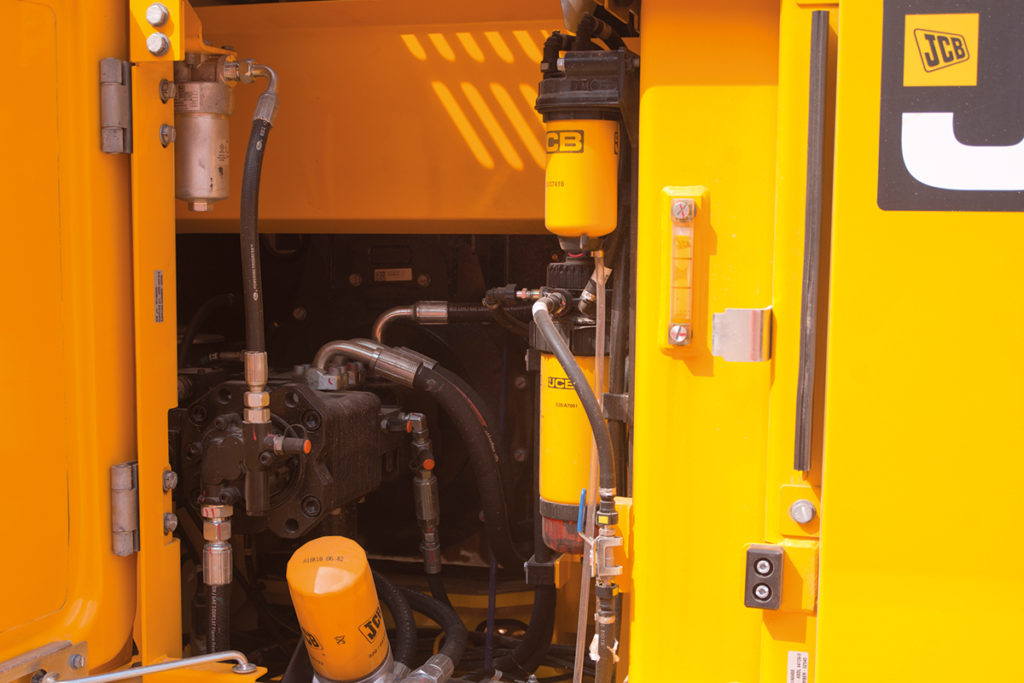 All three excavators have benefited from fine tuning of the hydraulic valve block, leading to improvements in flow sharing for multi-function use and the 131X is certainly easy to get to grips with. This hydraulic improvement also offers a claimed 8% boost in potential productivity during grading operations. An automatic engine shut-off system further reduces fuel use when the machine is not in operation.

Hydraulic pipework in key areas has been enlarged by 0.25” to reduce losses in the system and the hoses themselves now come with sturdy rubber clamps, to keep them fixed to the structure of the machine and the boom. Auxiliary flow shut-off taps are the same as those on the larger 220X. 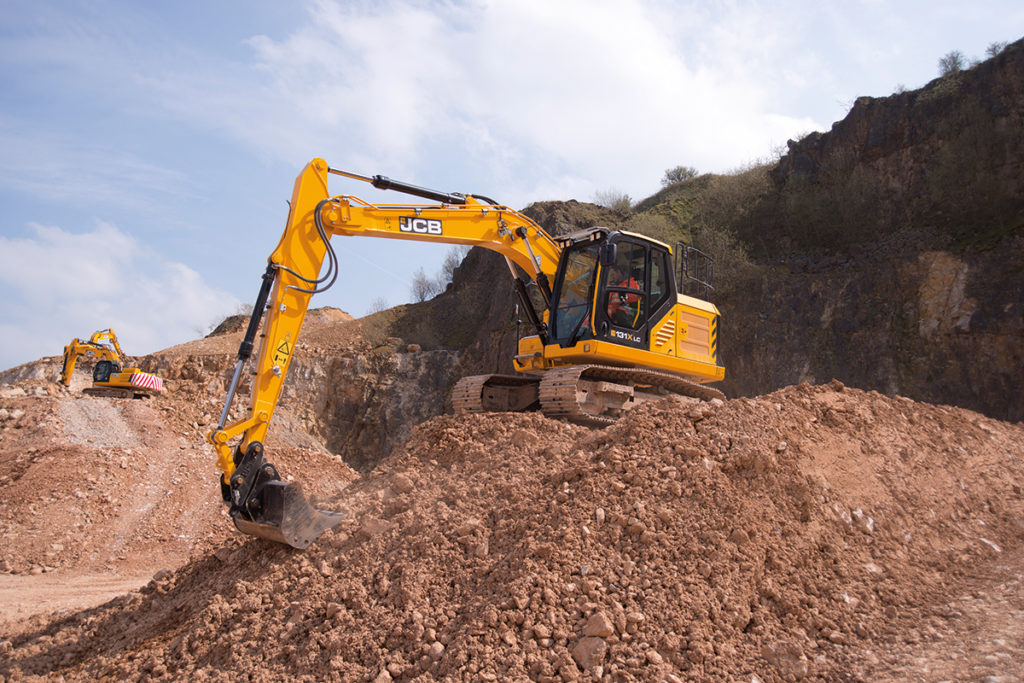 Customers can order the X Series machines with all of the required wiring and hydraulic circuitry to fit GPS and machine control systems from Topcon, Leica or Trimble, and the excavators can also be built Steelwrist-ready, for those that want to use a tiltrotator.

JCB has been a major player in the crawler excavator market since the 1960s, initially with its own British-designed machinery, then in cooperation with Japanese manufacturer Sumitomo. More recently, JCB has again been designing and building its own JS range of machines.

Now, JCB has brought the strength and durability of the new X Series line into the 13-16 tonne market. Whether you opt for the more powerful 140X or 150X, or the easy to operate and maintain 131X, the X Series machines are a big step forward for JCB. They look set to follow the success of the larger 220X in the UK crawler excavator market.