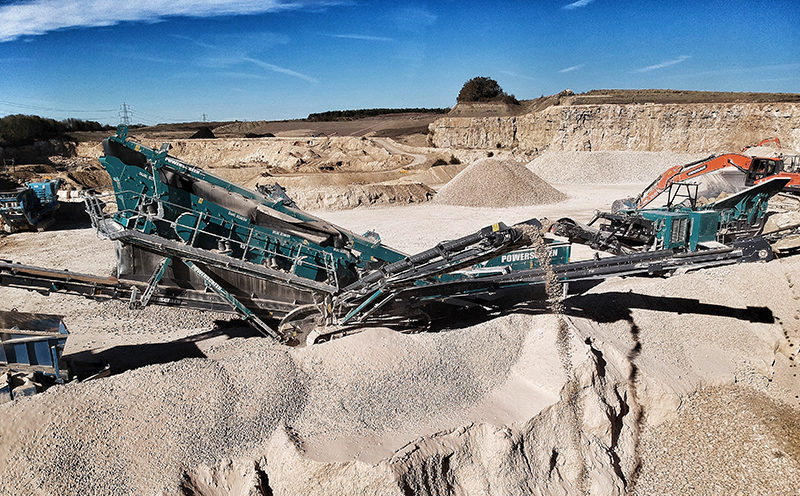 A Lincolnshire-based quarrying firm has purchased a new Powerscreen Chieftain 2200 from Blue Group, which is allowing it to work “faster and harder” processing large volumes of crushed material.

Following the purchase of a new Premiertrak 400 XA jaw crusher in 2017, Creeton Quarry opted for the Chieftain 2200 mobile screen to separate material at the Jurassic Limestone Quarry in Lincolnshire.

The quarry has three distinct beds: Creeton Banded, Creeton Hard White and Creeton Silverbed, which are utilised in a variety of processing and masonry projects.

The process can be changed depending on the requirement, but a typical setup is for the stone to be taken from the quarry face, with any oversized being broken up by a Rammer 3077 hydraulic hammer. The stone is then loaded into the Premiertrak 400 XA, which crushes the material to 100mm before feeding it into the Chieftain triple deck screen, creating four sizes of product.

There is an agricultural lime, a 2” clean and a type one which is being fed in to a second screen, a Chieftain 2100, for a specific job as this further separates the stone in to a 40mm-20mm and a 20mm-5mm, as well as producing further quantities of lime dust.

The oversized is extracted via the new auxiliary conveyor, which is described as being able to move from 0° to 70°. This allows the Chieftain to recirculate the oversized into an impactor crusher and back in to the Chieftain depending on customer requirements.

The Chieftain incorporates two double deck screen boxes and can switch between two and four bearing arrangements. It features an integrated, high capacity variable belt feeder and the heavy-duty single shaft screen boxes can be adjusted in terms of stoke, angle and speed.

The Chieftain 2200 also features hydraulic screen tensioning on the bottom deck, which is said to make it the “ideal” machine for operators processing large volumes of material, according to Blue Group.

Steve Johnson, quarry manager at Creeton Quarry explained, “We purchased the machine so we could go a bit faster and harder, and get a better, cleaner product. The aggression of the screen boxes also means it can handle the British weather.”

The new unit was purchased to replace an existing Chieftain 2100 at the quarry, which was over twelve years old. “We sold it no problem,” Steve said. “It still worked hard until the day it was taken away on the low loader; it’s just the new machines are superior and more advanced, so we upgraded.”

The 2200 is said to be processing “considerably more” tonnage per hour than the previous model, allowing the operators and crusher to work at maximum capacity. “We want to process more through bigger machines, not more men,” Steve added.

Ian Taylor, Blue Machinery salesman said, “Like many quarry men, Steve just wants to get on and produce. One of the reasons he chooses Powerscreen is because he knows Blue and Powerscreen are there to support him in reaching his objectives.”