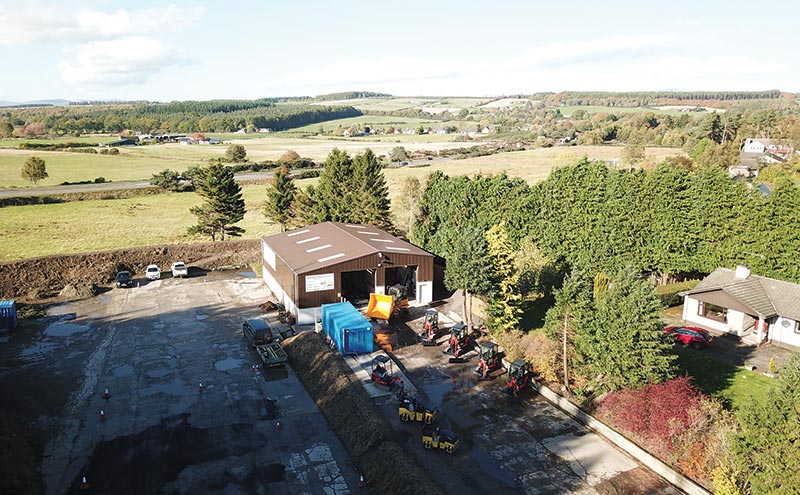 The Doune-headquartered firm has opened a new base in Tore to provide a more localised service to customers in the north of the country.

The new depot is headed up by Angus Innes and Ross McKay, with a full complement of engineers and administration staff to ensure the depot is run efficiently and offers customers the high levels of service Young Plant Sales have built their reputation on. The depot will also be stocked with all the machines and parts from the company’s expanding portfolio, which includes brands such as Kubota, Kobelco, Thwaites, Bomag, Hyundai, CompAir, Dieci, Bergmann, Terex Ecotec, TrommALL, Probst and Sennebogen.

Brian Young told Project Plant he had resisted the idea to open a new depot for many years but the timing was now right, not least because the firm now has the strength of the Molson Group behind it. He’s also hopeful the move will bring benefits to customers in the central belt because having a dedicated team in the north will relieve some of the pressure on engineers currently operating out of Stirlingshire.

‘Some of our major suppliers have been pressing us to do it (open a northern depot) for a number of years,” Brian explained. “I didn’t always feel the market was right or that we had the resources and staff to back up another depot.

“We’re now in our 40th year so if we can’t do it now, we’ll never be able to do it! We have the resources in place; we’ve got the finances in place and the market is strong. It’s all about timing and now the time is absolutely right.

“We have built a business on offering customers some of the best machines on the market, backed up by a team of experts that really care about our customers. This ethos is in the DNA of both Molson Group and Young Plant Sales, and I am excited that we now offer this locally to customers in the north from our new depot.”

Brian said the appointment of Angus Innes to the sales team has reassured him that the Highland depot is in safe hands.

“Angus has stepped up to the job well, by organising plumbers, electricians, painters, decorators, joiners, fencers, CCTV people, alarm people – all the thousand small jobs and big jobs that need doing to make a depot complete and successful.

“The depot is also there for the benefit of Ross, our north east sales manager. I expect Ross to be able to benefit greatly and take his customers there more easily than to Doune if he wants to show them some kit or draw on resources.”

For Angus, the opportunity to join Young Plant Sales was one he grabbed with both hands. He previously spent almost five years working for Volvo Construction Equipment (later SMT GB) as area sales manager for the north of Scotland and was keen to take on a new challenge.

“I think it might be obvious to Brian already but I feed on as much as can be thrown at me as possible,” Angus said. “I like to get stuck straight in; I like to be busy.

“I heard through the grapevine that things were happening here and sat back for a while if I’m being honest, looking from the outside in. It was only when I realised that the depot was going to be opening relatively soon that I thought I’d try to pounce on the opportunity. It’s a new challenge; it’s something I’ve always wanted to do.

“The customer base that I used to deal with quite often would say that they wouldn’t deal with Young Plant Sales because they didn’t have premises in the area. Being a competitor, it helped us sell against them. But when I knew this was going to happen and they’ve got fantastic products like Kubota, Thwaites and Bomag, along with the heavy-line kit, I thought to myself that these guys could make a real impact with the right team and I’d love to be part of it.”

One of the factors that swayed Angus’s decision was the family-run nature of the Young Plant Sales business. “Before Volvo, I worked for an agricultural family-run business called Ravenhill,” he explained. “I started my sales career there and really liked being part of a small team, getting decisions instantly. What you find with a smaller or family-run business is that it’s very centred around the customer. That was a draw. I also knew Young Plant Sales had been the Kubota dealer for a long time, which was a big draw for me as well because they’re a quality brand with quality products.

“When you combine Young Plant Sales, the products and Molson, you know that’s going to be a good team. I think we’re going to hit the ground running.” 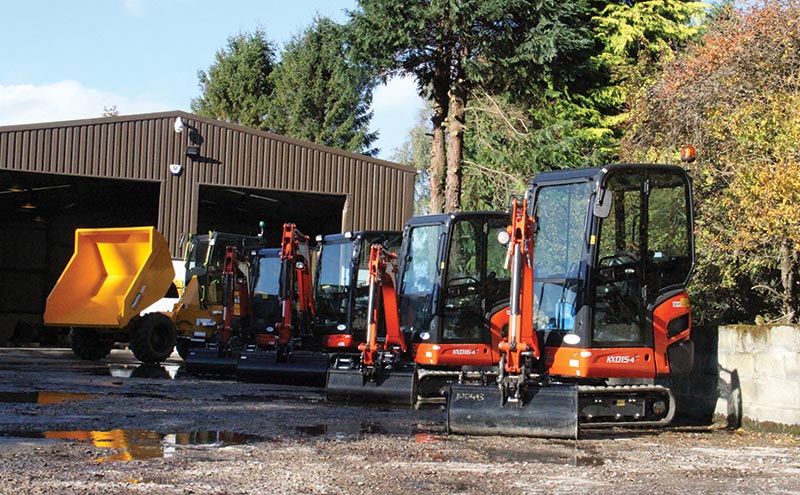 When asked about his plans for driving the business forward in the Highlands, Angus said he is starting with a “blank slate”, which he sees as a positive.

“We need to surround ourselves with the right team first; that’s the key. With any good business, (it’s about) the people behind it. We have got the right service and backup team, we can use that to help drive our market share. We don’t want to take over the world; we want to slowly, gradually build it and show people that we’re committed and they’re going to get as good, if not better, service than they’ve already been getting from Young Plant Sales.

“We want to show everyone that we’re there for the long haul and grow into different segments and markets as well. Now that we’re part of the Molson Group, that brings with it more things to push. There’s a lot of scope in sectors such as waste and recycling.

“We’re still getting the place up and running but I had three customers in yesterday, all really positive, really excited about seeing what’s going on. We’ve torn down the bank that was facing the A9 so you can see us right off the main road now. Somebody was saying to me that something like 140,000 vehicles a week will pass that depot on the side of the road. Lots of people are starting to see us now; we’ve got the big signs up. They’re seeing someone is coming in and investing. 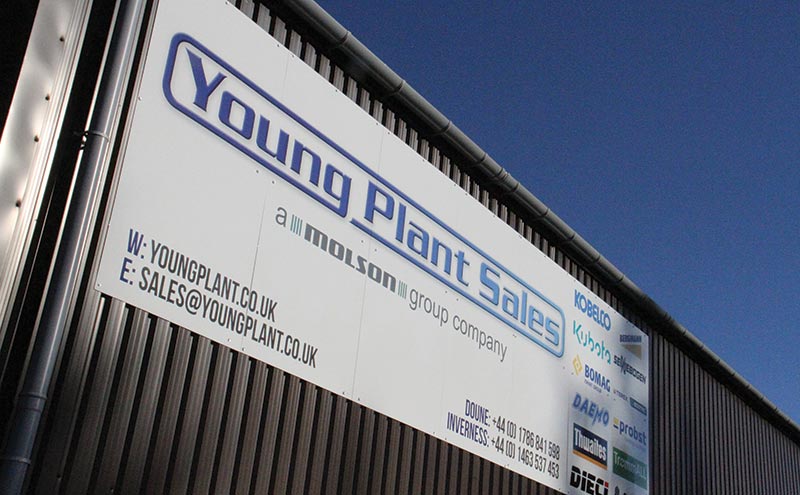 “I’m from the Highlands; we like to see people come in, make an investment and show they’re committed. That will give people the confidence to buy.”

Brian commented, “We already have the two sales managers in place and don’t need more in the short term, though we do have a seventh sales manager joining the team to promote our recycling products and he’ll cover the whole of Scotland. He’ll draw some benefits from that depot and being able to take customers there and get support from there.

“Previously, all the service and repair work in the north of Scotland was done by our team in Doune. They would go up and stay in hotels. But we are now able to build our own service team in the north, for the north.

“Certainly, in the initial year or two, we’ll still need to draw resources from Doune to help them out. Likewise, there might be times when we need to draw some of those resources from there down here. It now gives us two service centres; two centres where customers can go and buy spare parts from; get their oils, lubricants and anything else they need to keep their machines in first class condition; and get local, friendly and knowledgeable technical assistance.

“A big problem for some of the customers in the past is they don’t like to wait for our engineers to travel up from here if they’ve got a breakdown. Now we’ll be able to offer that local service without all that travel time, providing a more immediate service. 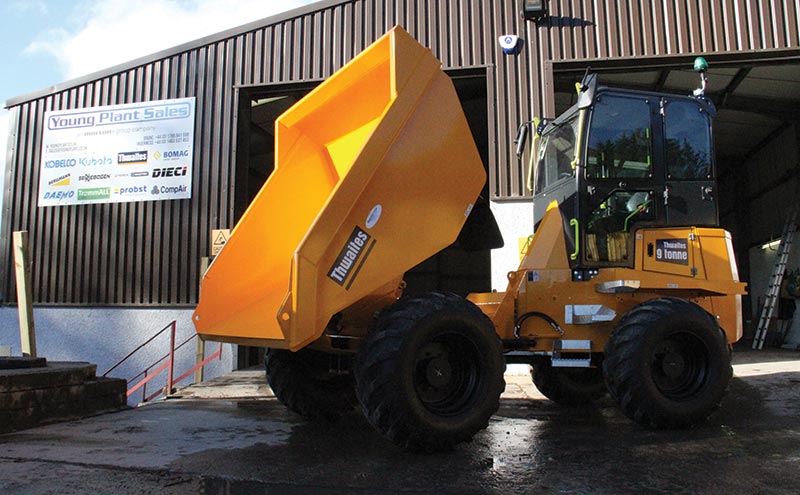 “Customers have partly driven this move too; the demand has come from them. Customers we’re doing more business with have been saying to us they’d buy even more of our products if we had (a more local presence).”

Although it’s still early days, Brian said the feedback has been “very positive”, which has given him great encouragement. He believes there are subtle differences between customer requirements and expectations in the northern part of the country, compared with elsewhere.

“I think there’s more loyalty to good suppliers in the north and more loyalty to premium brands,” he explained. “That’s because customers must, to a certain extent, stand on their own two feet and look after themselves more due to the remoteness of some locations. So, they’re happier to pay a premium price for a premium product because reliability is more important to them than perhaps customers in the central belt who have more suppliers on their doorstep to help them out in a hurry.

“The Highlands, and particularly the Islands, don’t enjoy the same booms  – they don’t get the same troughs either – so business is a bit more level, but they don’t enjoy the good times to the same extent as everybody else. They don’t see the same investment in infrastructure that the rest of the country does.

“We have some very loyal customers in the north and we hope we will win more business from them by having a facility and support closer to them. I think we’ll benefit greatly in Doune as well because once the team is established in the north, that will relieve a lot of pressure down here because our engineers in Doune, if they’re not travelling north as much as they were, will be able to offer our customers here an even better service too. The plan isn’t just to offer a better service in the north; the plan is to offer a better service throughout the whole of Scotland. The benefits we can draw from having a very professional service team throughout the whole of England behind us from Molson as well is great. They have the latest technology including electronic job cards and we’ve put a brand new IT system into the Young Plant Sales business that again will benefit both Doune and Tore.”