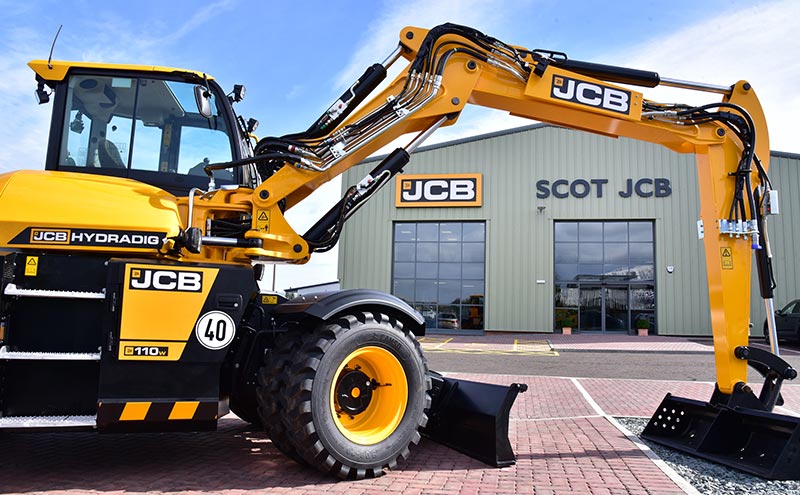 SCOT JCB is confident the firm’s new Edinburgh depot will give the business an extra edge in an increasingly competitive job market.

The firm recently opened its new base in Sighthill, which is over six times the size of its predecessor. The company had been in the market for a new home in the Edinburgh area for some time, having outgrown its previous location, which was based just a few blocks away. The new site occupies 1.4 acres, with a total building footprint of over 9000 square feet. Scot JCB’s ownership of the adjacent plots also provides room for future expansion as and when required.

Finance director Stephen Barker told Project Plant the state-of-the-art premises will be a great selling point to potential new recruits in the region.

“The world has changed,” he explained. “People nowadays take much more pride in their workplace. It’s a competitive job market – I read an article this week saying unemployment is now so low that companies are fighting to recruit. We find, at times, that it’s difficult to get good staff. There’s nothing better than saying ‘look at this fantastic place you’ll be coming to work’. We’ve got all the latest technology, the place is properly designed and we’ve got training space. We’ve got a great offering.” 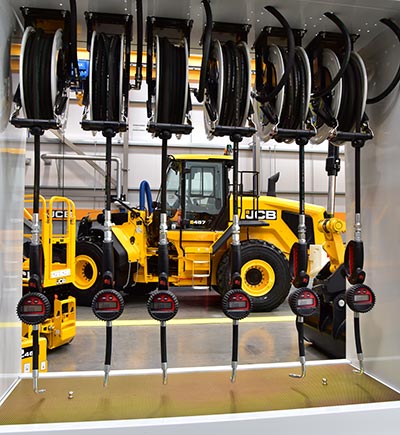 Stephen believes the impact of the new Edinburgh depot will be dramatic. “We’ve had a depot in Edinburgh for many years, but it was quite small. A lot of our business is done out in the field, but in terms of workshop facilities and parts warehousing, we were struggling for space. We recognised a few years ago that really we needed to find bigger premises. We’d been on the hunt for something that would allow us to do a bit more in terms of improving our customer service, do more workshop jobs in better facilities, and give us more yard space. People like to come and have a look at the machinery you’re selling. Particularly when it comes to used equipment, it is very important to present your wears for display to potential customers. We didn’t really have the yard space to do that before so that was on our shopping list when we started looking for premises. We were looking for somewhere that gave us enough space to have a sizeable yard, a modern workshop, more efficient workshop space, and improved parts/warehousing. It all comes back to the same thing: it’s driven by customer service.”

Stephen added that a major benefit of having more warehouse space is that parts are now likely to be on the shelf and immediately available when required, eliminating the need to wait for them to arrive from JCB in Staffordshire or Scot JCB’s Glasgow depot.

He believes having the capacity to expand has ‘future-proofed’ the business. The plan initially is to find a tenant to rent the vacant space adjacent to the site for a flexible term, giving Scot JCB the capability to grow when the business need arises. 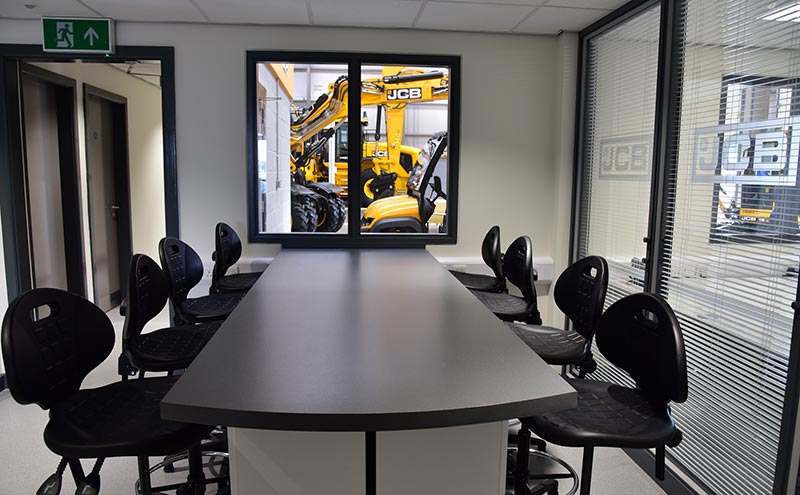 “We didn’t want to be hemmed in with no room to grow. When you invest in a property, particularly when it’s a new build, you want it to be right. The last thing we’d want to do is have a new build and, ten years down the road, realise it’s too small or need to move again.”

Some of the features of the new depot have been specifically designed to allow Scot JCB to ramp up customer service capability. “Our older depot had a single workshop bay or two bays max depending on the size of machine going into the workshop. We’ve now got eight – four double length workshop bays,” Stephen explained. “Everything is driven by efficiency; to do the best job for the customer in the best way. We’ve put in a 6.5-tonne overhead travelling crane, which means that one man can now safely and efficiently do jobs that might have needed three men to do in the past. The crane lifts components on and off machines, and saves time as well. We’ve also invested in an oil dispensing system, where the oil is stored in our parts warehouse in bulk containers. It’s pumped electronically to a central dispensing unit – a bit like a petrol pump in the middle of the workshop. That stops our guys having to trail across the workshop carrying jugs of oil. It’s electronically controlled so whether they need six, ten or twenty litres, they can get exactly the right quantity so they’re doing the right job on the engine and not over or under filling. We can dispense a number of different types of oils, and there’s an oil waste system where empty containers can be taken away and properly disposed of.

“In a sign of the times, we’ve put in an area where our engineers can fire up their laptops, which was often overlooked in the past. Increasingly so, engineers are as handy with the laptop as they are with a spanner.

“We’ve also taken the opportunity to put in a training/meeting room. It’s a big room – 10m x 8m – with a moveable divider in the middle. It’s a flexible space where we can have meetings and training courses, whereas before we didn’t have anything like that on site in Edinburgh. We had some space in Glasgow but we were finding more and more that we were doing a lot of our own training. We have our own full-time technical training team, and having another sizeable meeting/training room in Edinburgh is really going to help us. Whether it’s three people or 23 people, we’ve now got the space to cope with it. 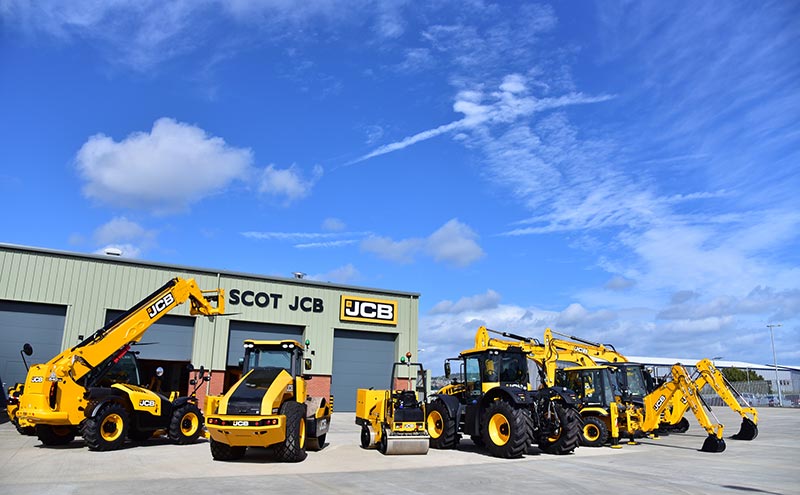 “We’re big advocates of the apprenticeship programme. Across the company, we currently have in the region of 150 engineers and about 45 apprentices on the books, because we see the need to grow our own people. If we can take someone at 16/17 when they’re leaving school and put them through our apprenticeship scheme for four years, they come out of that fully trained up on all the latest technology – both the traditional mechanical engineering and also the electronics side, which is getting more and more high-tech.”

A further feature of the new depot, Stephen explained, is having the parts and service employees working side by side, with the aim of driving further efficiencies.

“Sales, service and parts are the three principle areas of our business,” he said. “Often the parts side was distinct from the servicing side. We saw the advantage of getting these guys together. We’ve put them in the same space and it just means there’s a lot more joined up thinking. If there’s an urgent breakdown and a customer is out on site needing a certain component, one part of our business will be organising the engineer to go and do the repair, while another part will be making sure we’ve got the right spare parts. If those two members of staff are in the same room, they’re talking to each other all the time. It makes it a lot more seamless to plan jobs and get the right service done for the customer.”

Stephen revealed the new base will give customers added confidence and also provide a local jobs boost, with around half a dozen new vacancies expected to arise in due course in roles such as engineering, warehouse and support staff.

“There’s currently 16 people on the payroll in Edinburgh so another six would be a significant increase. Previously we didn’t have the workshop space to support that number of engineers. Now we’ve got the room to do it and we’ll take on more work in the central Scotland area.

“People want to know that when they’re getting machinery maintained or they’re buying machines, that the backup is going to be there and that it’s going to be the right backup. When they see the investment we’re making, they can see that we’re not a company that’s standing still.

“We’re Scottish, we’re privately-owned, we’re proud of our heritage and we’re reinvesting money in the business to improve the customer service. We’re never complacent; we try to see what we can do to go that extra mile. The thing about our business is we don’t have a retail customer base. All our customers are in business. When their digger isn’t digging, that means they’re not making money. They need us to react and we’ll be out there when they need us.

“If you’re spending £4 million on a depot in Edinburgh, that’s a great statement. We’ve got the confidence that we can spend that money knowing that we’re in it for the long term and we’ll get the payback over many years.”