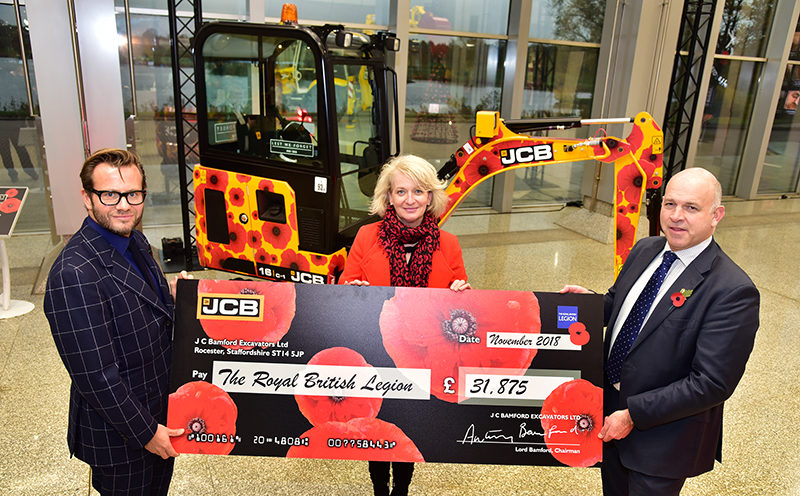 JCB has presented a cheque of over £30,000 to the Royal British Legion’s Poppy Appeal ahead of the centenary of World War One.

The global plant giant, which hosted Staffordshire’s Poppy Appeal Launch at its global headquarters in Rocester, donated a unique poppy-liveried mini excavator, which was then auctioned to kick start the appeal. JCB customer Arnold Plant Hire made the winning bid of £25,500.

In addition, JCB commissioned Stoke-on-Trent ceramics company Valentine Clays to craft 225 bone china poppies – one for each soldier in Uttoxeter and the surrounding villages who lost their lives in World War One. The limited edition poppies raised a further £6,375 for the Royal British Legion’s appeal, which provides lifelong support for the armed forces community.

He commented, “The British Legion’s theme for the Centenary is ‘Thank You’ and there is no better way of saying our own thank you than helping to raise funds for such a worthwhile cause. Arnold Plant Hire has given very generously and we are sure the unique poppy liveried 16C-1 mini-excavator will be a stunning addition to their JCB fleet.”

Simon O’Leary said, “The Royal British Legion would like to thank JCB and all its employees for the wonderful support in this centenary year of the Armistice which is marking the sacrifice and contribution of the World War One generation. Also we would like to say thank to you Arnold Plant for their support of the Poppy Appeal.”

Philip Oldham added, “We are a proud British company and we have bought a number of special liveried JCB machines in support of various UK charities. We are particularly delighted to have won this splendid poppy liveried mini excavator and its first outing will be at a Remembrance Day Parade this Sunday.

“Over the coming months it will be very visible on construction sites, reminding everyone of the sacrifice made by the World War One generation and saying a very special ‘Thank You’ to them!”