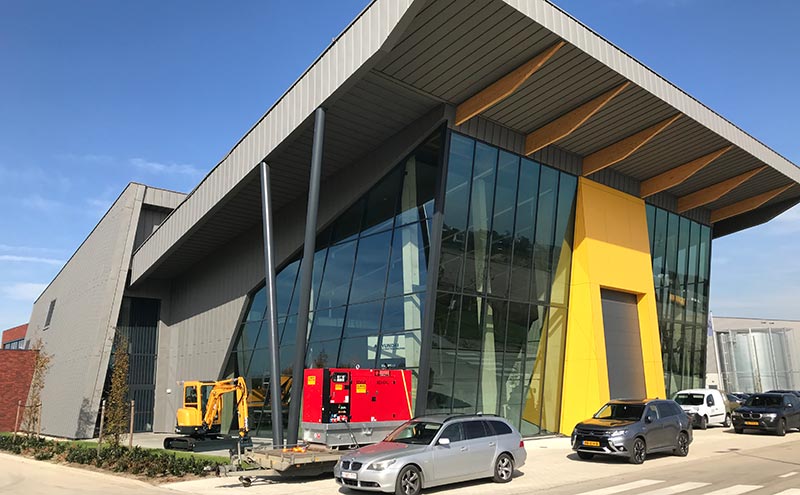 ONE year on from the inauguration of its new European headquarters in Tessenderlo, Belgium, Hyundai Construction Equipment Europe (HCEE) recently played host to a hefty contingent of international customers, prospects and press for the Hyundai Experience Days.

With the aim of showcasing its fleet, its facilities and its ‘Hyundai effect’ concept, the event consisted of a series of on-site demonstrations, a tour of the new base of operations and a number of company presentations.

Kicking off early on a bright and brisk Tuesday morning, we were ferried by the busload to Hyundai’s 10,000m2 demo arena adjacent to the HQ, where we were given the opportunity to get up close and hands-on with the Hyundai range of crawler excavators, wheeled excavators and wheel loaders in onsite conditions. Among the machines on show were the new HX130 LCR (which made its debut at ScotPlant this year); HX300 LR; HX 145 LCR; HL960; 60CR-9A fitted with a Rototilt tiltrotator; and the mammoth HX520 L, which proved to be a huge hit with the crowd. 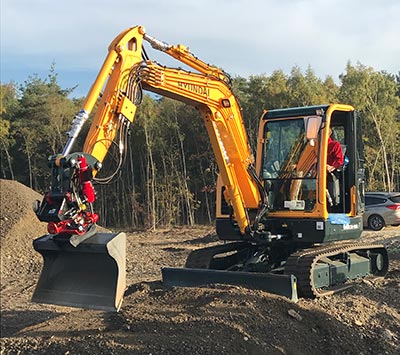 “Everybody wants to be on that machine; the bigger the toy, the more people like it,” Johan Maes, product specialist at HCEE told me about the 52-tonner during the demonstrations. “Next time maybe we should go even bigger!”

Johan said that putting on an event such as this added a lot of value for Hyundai CE. He explained, “We have this brand new facility here in Tessenderlo so we want to show that to everybody and we also make sure that the people who come, they really come for Hyundai.”

Representing a 30 million euro investment for the company, the building was designed to look similar to an excavator, with the sloped roof mimicking a boom and the 18-metre glass fronted office tower resembling a reinforced operator’s cab. The building’s sidewall is also designed to look like the engine compartment. It’s a loose concept, but an undeniably clever one. 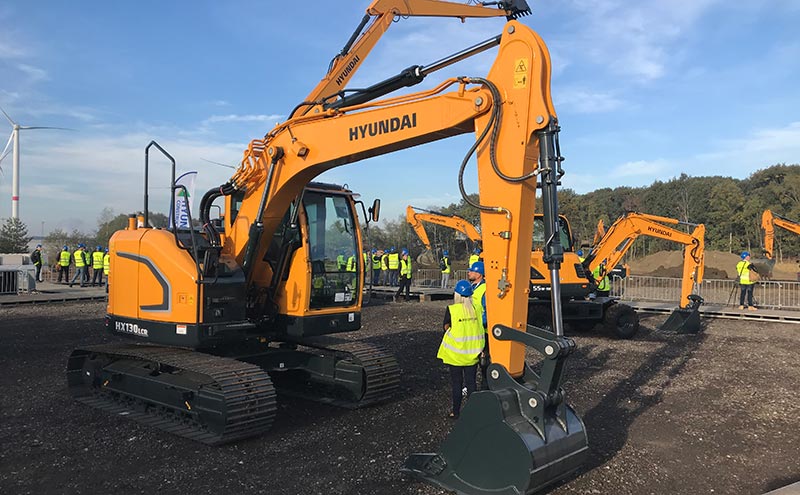 The new European HQ has created a lot of opportunities for growth, Johan continued. With 116 dedicated employees an annual staff increase of 10%, the site features a showroom, an event hall, a 12,000m2 parts warehouse, 5,400m2 of office space and the Hyundai Training Academy.

Upon arrival at the facility we were divided up into groups, with the press being the ‘purple’ group. Our first stop was the aforementioned Training Academy; a large, white-walled hangar-like building housing a number of machines and engine components, where trainees from across Europe come to gain valuable practical experience. The units range from mini and midi excavators, to large crawlers and wheel loaders.

This practical element is delivered in tandem with theoretical learning in the Academy’s classroom facilities where other aspects of the business are taught, such as marketing and sales training. It was in one of these classrooms that we were given a presentation on Hyundai’s Hi-MATE remote management system, which utilises GPS-satellite technology to provide information such as operational performance, archived operating history, fleet monitoring and fuel usage. The system also offers real-time alarm and location information, as well as theft prevention through geo-fencing, which sets off an alarm if the machine leaves a pre-defined geographical area.

Next up was a presentation from product specialist Gert Peeters who gave a breakdown of the Hyundai CE fleet and explained that all the manufacturer’s technology aims to be in service of comfort, fuel efficiency, easy maintenance, durability, easy machine setting and safety.

Tina Boënne, senior PR and communications officer, gave the final presentation of the day, where she discussed Hyundai’s history in Europe and the company’s goal of becoming one of the world’s top five construction machinery manufacturers by 2023. The firm is currently estimating a European turnover of 325 million euros for this year, which it needs to more than double by 2023 to meet that target. This was referred to as “the European challenge”. 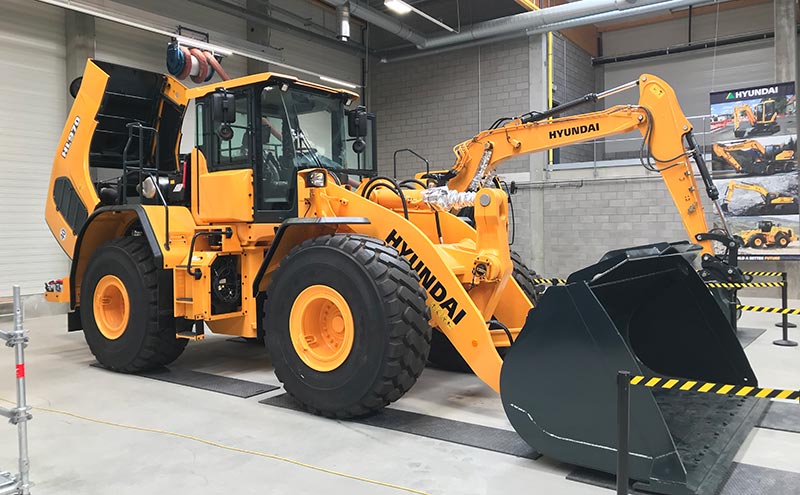 According to Tina, these ambitions would be realised through a business strategy focused on Hyundai’s own development, market intelligence, rental business, OEM, ODM and partnership.

The theme running through the presentation was very much one of growth and future-proofing, with HCEE eager to communicate its dedication to Europe. Speaking on the new European HQ and its significance, Tina said, “This building is built for the future, it’s built to last and it shows the dynamism and willingness to invest in this European market. I think that is a very strong message we want to convey here…we are not taking this lightly.”

A particularly interesting moment came with Tina’s open acknowledgement that Hyundai does not believe it is currently perceived as a premium brand. This is something the business is determined to change. “I can honestly say that the quality of our machines is really on par with the other competitors in the industry,” she said. “The weakness we still have is that we are still being perceived as not being a premium brand.” 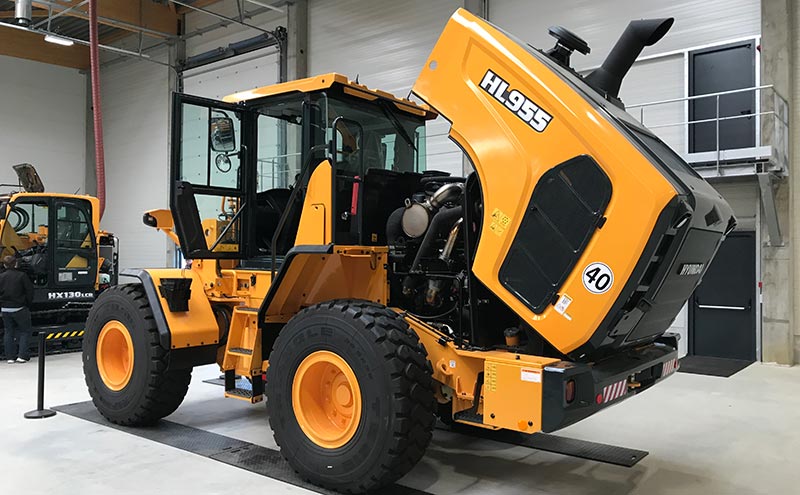 The final stop on the tour was the parts warehouse – a 12,000 sqm hub with a stock value of approximately 16 million euros. The aim of the warehouse is to reassure customers in Europe they won’t have to wait on parts coming from South Korea, Tina told us. Current warehouse capacity is expected to last the company for several years, after which Hyundai will utilise an additional 4,000m2 of space set aside for expansion.

In the evening, guests were treated to a gala dinner at a former monastery in Zelem, complete with an address from HCEE managing director Alain Worp. An electric live performance from a swing band rounded the event off in grand fashion.

It remains to be seen whether or not the company will meet its ambitious 2023 target, but judging by its impressive new facilities and robust fleet on show here, it seems more than capable.