BREWSTER Bros, a third generation family business, recently opened what has been hailed the largest recycling plant of its kind in the UK, in Pumpherston, West Lothian.

As part of an overall £3.8 million cash injection into the site, the firm has invested over £2 million in a CDE wet processing system, said to be capable of recycling some 400,000 tonnes of construction, demolition and excavation waste annually.

The plant has been described as a ‘game-changer’ for the construction industry due to its ability to save money for customers and significantly reduce the amount of waste going to landfill. Brewster Bros’ fleet of 12 tipper lorries collect soils and rubble from sites within about a 50-mile radius, to be transformed into high value sustainable sand and gravel. 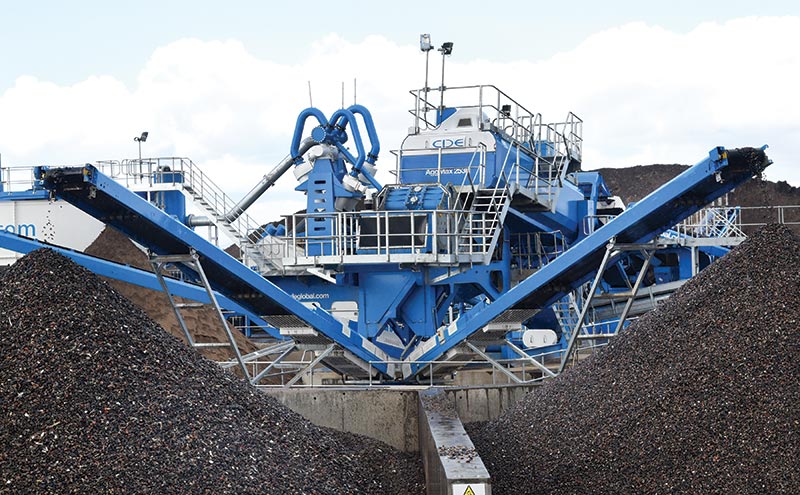 The company has taken over the site from recycling business, Henry Gillies. Brewster Bros has predicted an annual turnover of £3 million at the plant and further job opportunities for the local community in time.

Director Scott Brewster told Project Plant, “My grandfather originally started the firm as an agricultural business at Ratho around 1960. My dad and uncle, his two sons, took that business on, and farmed locally for about 40 years. They then bought our previous site at Ratho, which we’ve operated as a restoration project for the past ten years. That came to an end in 2017 and we started looking around at other sites to continue that trade. Henry Gillies was a local business based here – they were a competitor of ours. Sadly the owner died so we bought this site from his estate and retained the jobs that were here.

“We bought that business and merged the two together, rebranded as Brewster Bros and that’s where we are today. 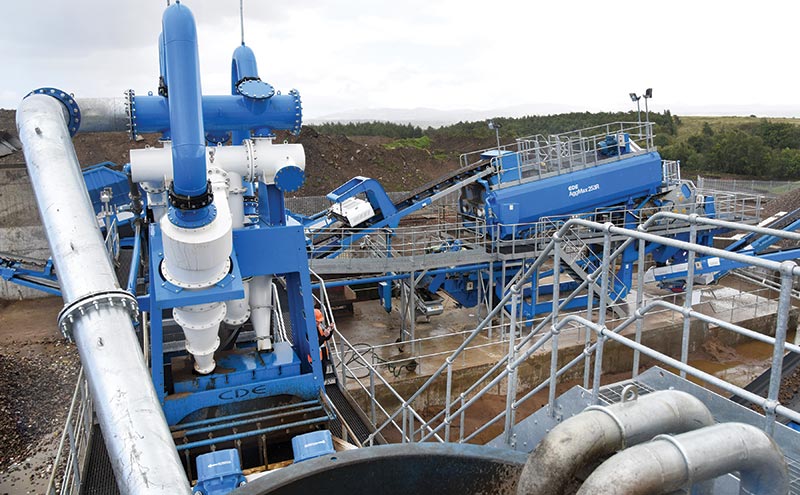 “This is the biggest investment we’ve ever made so it was a big, big decision. Sadly my uncle died during the construction of the plant so he never got to see it but that’s where the name comes from; Brewster Bros is a dedication to him. It’s still a family business. My dad Alex looks after the operational side, while my cousin Roger Hastings is sales manager. I’m an accountant to trade so I take care of the back office.”

With environmental pressures greater than ever before, and companies actively looking for ways to reduce their carbon footprint, Scott believes the timing of this new venture couldn’t be better.

“Over the past ten years we’d been tipping a lot of valuable resource into the ground after recovering as much basic product as possible via ‘dry’ screening. We looked for methods of extracting more value, which is when we came across washing,” he explained. “Hence we started looking for suppliers in the market. We found CDE to be the best and most approachable. We bought their plant worth over £2 million, and together with all the infrastructure that went with that, it was a total investment of £3.8 million. 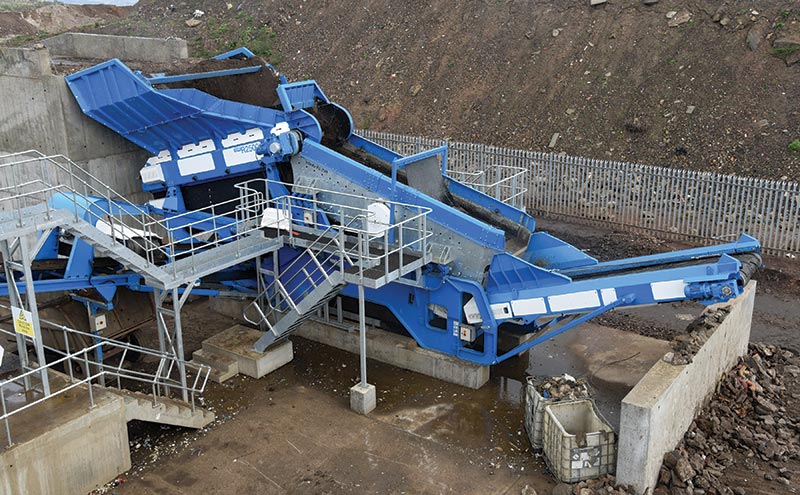 “The plant is based on sand and gravel quarry technology. It’s a sand and gravel washing plant that has been adapted for dirtier feed material, which is basically soil and rubble that we collect through our tipper fleet and bring back to this site. It gets put in the feed, washed and graded into five products: two sands and three gravels.

“We also recycle the dirty water. In a sand and gravel quarry you’d have settlement lagoons, and it would sit about for a long time. But we actually mechanically recycle the water with a 90% recovery rate.  We end up with a residual clay and silt cake effectively, that we’re using to restore the wider site here. We’re sitting on a site of two hectares; the wider site is about 20 hectares and is one of the old oil shale bings, so we’re using that material to cap that off. We’ll put a layer of soil on top and restore it to grazing land.”

Due to the quality management systems the business has put in place, Brewster Bros is now an accredited supplier of Zero Waste Scotland’s Aggregate Quality Protocol Directory. 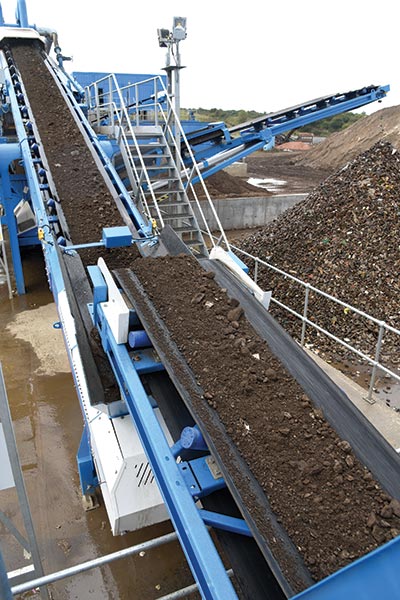 Scott said the customer market has become “informed” in recent years and now realises that these recycled products are “just as good” as quarry products.

“It’s created this viable business model that we’ve adopted,” he added. “You do still get the more traditional customers who, once they hear the word ‘recycled’, the conversation turns negative and you have to try and recover that. We’re meeting all the BS standards for pipe bedding, cable laying and even concrete production, so the quality that this plant produces is right up there with what you’d get from a virgin site.

“The market is very competitive. These contractors we’re dealing with are on tight margins themselves. It is very price-driven, but we have that competitive advantage where, taking the waste in we’re not paying landfill tax, or the customer’s not paying landfill tax. And on the products side, we’re not charging an aggregates levy, so we’ve got a distinct discounted advantage there on our virgin competitors. Also being closer to the urban population helps as well, where all these buildings sites are happening. Quarries are usually a little further afield so our haulage is usually a bit cheaper as well. 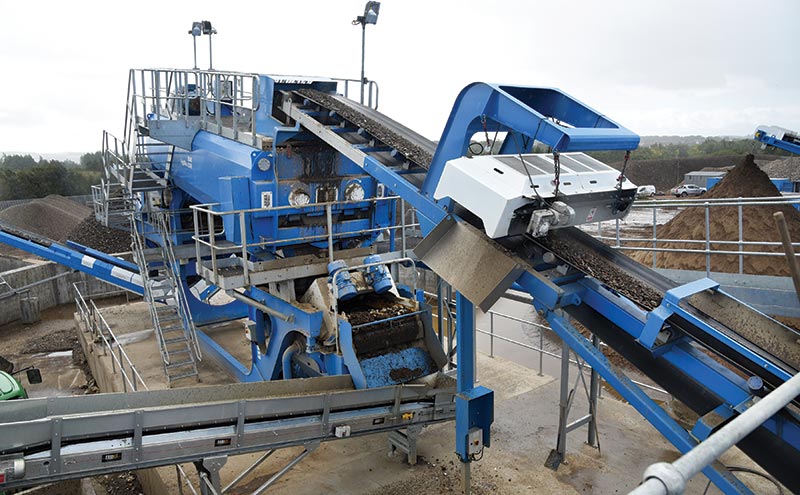 “A lot of people are proactively contacting us. Sustainable construction is a real buzz phrase at the moment in the industry. I’ve actually been surprised with the amount of Tier One contractors who have been getting directly in touch rather than letting their subcontractors deal with it. I’m encouraged by that because they can obviously put a requirement in their tenders to use recycled products and hopefully that filters down the supply chain.”

As well as forecasting a £3 million turnover at the plant, Scott has also tipped net profit to reach the £1 million mark. He believes that with the restoration operation going on outside the operational area, there’s around a 20-year lifespan to fully restore the site.

“At 20 hectares, it is a large site to restore and the residual product that we’re using – the silt and clay cake – only makes up 25% of what’s coming out of the machine. It’s 75% product we can sell back into the construction market and 25% we can use on site here. It also has a use in itself that we can sell externally as a landfill-capping product. We don’t expect that to be high volume but there is an external use for it as well. All in all, I think there’s a 20-year lifespan of restoring the bing. Once that outlet for that product is used up, then we’ll have to look further afield for external uses.” 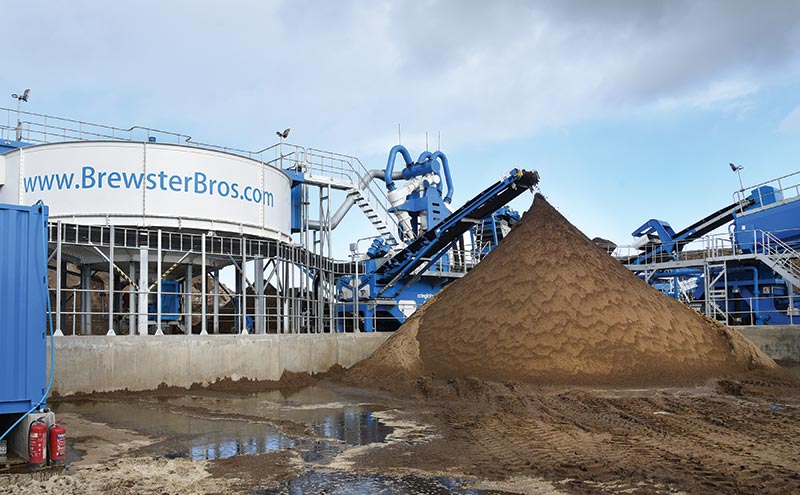