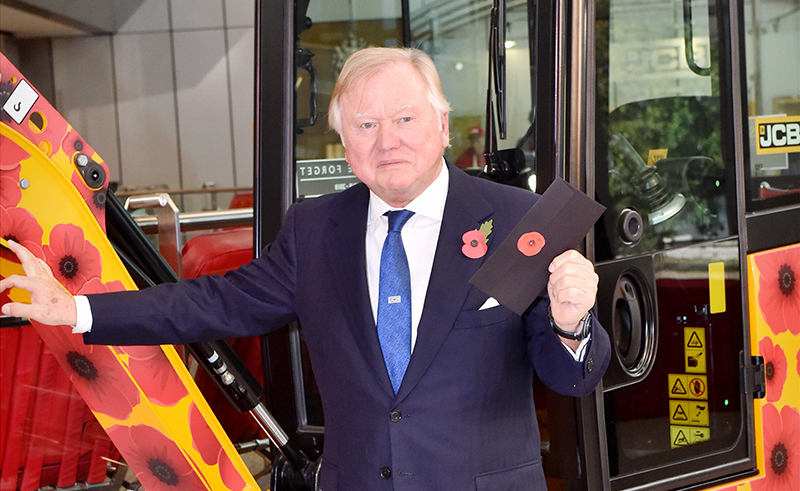 JCB has marked the centenary of the World War One Armistice in three ways, including auctioning off of a mini excavator with poppy livery for the Royal British Legion.

A team of JCB apprentices and graduates created an art installation, which holds 255 ceramic poppies. More than 30 ex-service employees were involved in the creation of the piece, and each poppy represents a soldier from Uttoxeter and the villages surrounding JCB’s Staffordshire HQ who gave their life in the conflict.

The manufacturer raised £25,500 to be donated to the Royal British Legion, with the 16C-I mini excavator going to Arnold Plant Hire of Stockport. The auction total was announced by JCB chairman Lord Bamford at an event where the company hosted the Staffordshire Poppy Appeal Launch at its HQ.

Both the art installation and a special 25-feet-high, 40-feet-wide moving pictorial roll of honour baring 50 photographs of JCB employees’ relatives who served in World War One, were unveiled at the event, which was attended by Chelsea Pensioners.

Lord Bamford said, “As a nation we must never forget the debt we owe to the Great War generation, and this year is our opportunity to say ‘thank you’.

“Many people who work at JCB had forebears who fought, and in many cases died, in World War One.

“So many families were torn apart by that awful conflict, so it’s important that we not only say thank you, but that we also do not forget.”