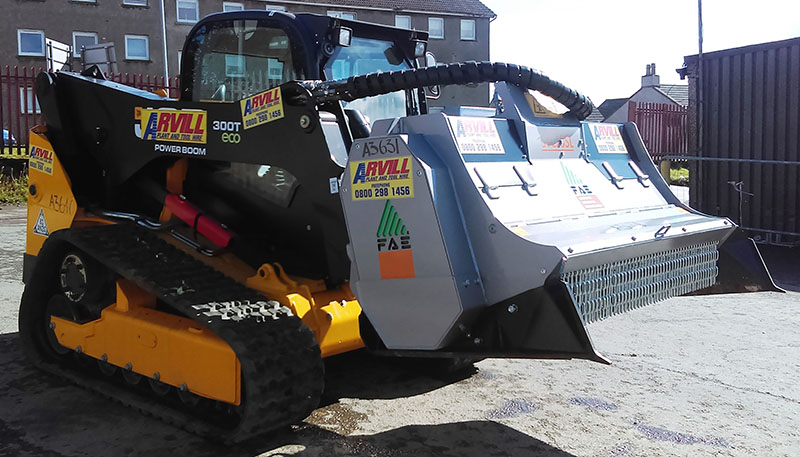 AIRDRIE-based Arvill Plant and Tool Hire has invested £400,000 in new kit in a bid to make construction safer and more eco-friendly.

The family firm has acquired a new “state-of-the-art” stonecrushing rig as part of the investment spree, which Arvill claims can “radically” reduce the environmental impact of resurfacing and ground stabilisation works.

Described by the firm as the only machine of its kind in use in the UK, the £30,000 stonecrusher is designed and built for a new skid steer tracked unit, which cost and additional £46,000.

The new rig has already been put to work on several projects, including a programme of upgrading towpaths along the canal network throughout Scotland.

Hayley Shevill, commercial director at Arvill Plant and Tool Hire said, “The stonecrusher is ideal for challenging terrains such as the canal and cycle paths, which are narrow and can have fragile banks. The unit also helped reduce disruption to pedestrians and the paths remained open throughout operations.”

The kit can also work in conjunction with ground stabilisation materials, creating a strong load-baring layer with a suitably flat surface. Hayley explained, “The solution meets a number of environmental criteria. It means no energy intensive excavation is needed in a quarry to provide material and it reduces pollution, time and costs on site. We are confident that our acquisition of this machine will open up new markets for us.”

As part of its ongoing expansion strategy, Arvill has also added 10-tonne cab dumpers and 6-tonne cab dumpers to its fleet. The larger dumpers are fitted with front and rear integrated cameras and the smaller with front cameras wit the aim of addressing safety concerns around front tipping vehicles.

Going forward, Arvill said it aims to help eliminate many of the major health and safety risks by investing in dumpers fitted with rotational cabs.