SCOTLAND’S plant firms are being urged to make their machines look as unique as possible in order to deter thieves.

With organised criminals using increasingly sophisticated methods to target construction equipment, businesses involved in this sector are being encouraged to take extra measures to protect their assets.

PC Willie Johnstone, who works in Police Scotland’s Specialist Crime Division, is involved in preventing and reducing vulnerability of plant and agricultural equipment being stolen throughout the country. His team are planning to organise a seminar hopefully for later this year, offering advice, education and support to plant firms with a key message aimed at target hardening through some of the safety products and systems currently on the market, which can assist in both preventing theft and tracking down stolen machines.

In order to highlight the prevention message about looking different, in conjunction with key partners, Valtra, Hamilton Ross and Instant Image Perth, Police Scotland has marked up a tractor, complete with flashing blue lights that has been on display at various events throughout Scotland this summer.

Willie told Project Plant, “It’s a great asset for community engagement but the main message is that if you have a standard tractor beside one that has markings on it to make it look different, nine times out of ten a thief will take the standard machine because it disappears into the abyss.

“It’s the same with construction plant. Make your stuff different; make it unusual. This can be done through things like branding, welded on fleet numbers, sign writing and extra lights. 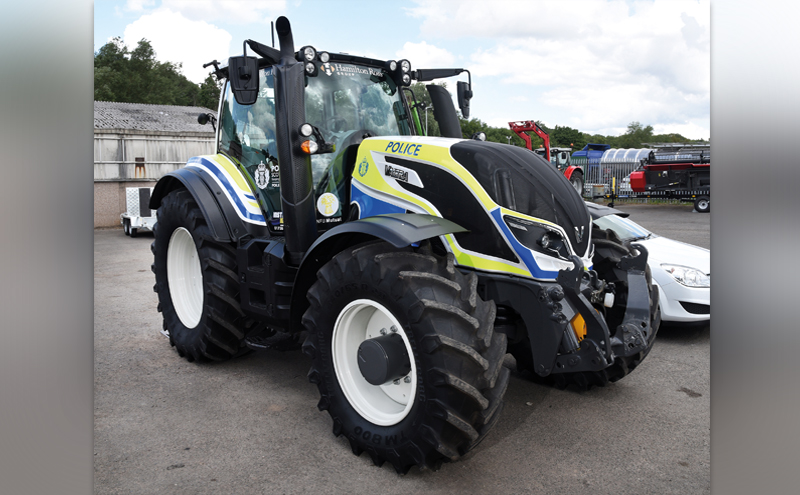 “If you’re a criminal, you’re always going to take the machine which blends in, does not look out of place rather than taking the risk of something that’s different, because if it looks different it’s identifiable and everyone will see it. It’s harder to transport; it’s harder to conceal; it’s harder to sell on. For example, say you have a fleet livery – they on occasion remove stickers but it always leaves a residue. The tractor is on loan from the Hamilton Ross group. It’s a crowd-puller and draws people in and although it looks like a police tractor, the primary message is that it’s visibly different, attracts a lot of attention and gets people talking.”

Willie said the most commonly stolen construction machines tend to be smaller items that are easier to conceal such as mini excavators and rollers. However, he’s aware of everything up to 30-tonne diggers being lifted by crooks. Some machines are sold online – most likely to customers who aren’t even aware they’re buying stolen goods – while others are shipped overseas.

Willie also highlighted the issue of bogus companies being formed with the goal of getting their hands on high value equipment. They hire machines before disappearing off the face of the earth.

“Some of these criminals are very organised and very good at what they do,” Willie said. “You do get the lower end criminals involved but when you start getting into high value equipment, that tends to be people who have a good knowledge of how a machine works, know a route to get it away and have a machine to transport it.”

As well as making machines physically stand out, Willie is also keen to spread the word to plant bosses about the products that already exist to deter criminals in the first place and, in the event of a theft, can increase the chances of a successful recovery.

“There’s a phrase we use in the police – target hardening. What we look to do is target harden your property, your processes for protecting it and security devices you can fit to it,” he explained.  “There is the CESAR (Construction Equipment Security And Registration) system, which is both Home Office and police-approved. This is a marking system, identified by a white triangle. The system uses various things including visible markings, hidden transponders and also forensic marking. It’s like nail varnish dotted all over a machine. In each part of that marking, there’s a dot with a unique reference number. If a machine gets stolen and the identity’s been removed or we recover any parts from the machine, there are things we do to identify these dots. We can magnify the dots within the solution and trace it back to the owner. If, for any reason, we can’t get the dots but we get the solution, the actual solution itself is DNA-specific.

“That’s an excellent system. If you can trace a part back to a victim of crime, you’ve got a case.  If you recover a part and can’t identify it as being stolen, you’ve no case and it’s really frustrating. A lot of plant equipment now is coming out with CESAR fitted as standard. You can also retrofit it; there are dealers who have been through the accredited course and can fit that to second-hand machinery. You can get a reduction on your insurance policy.

“It’s both an overt and a covert system. It’s a visible deterrent with the triangle and it’s covert marking as well so it ticks every box. It’s not a tracking system – people think it’s a tracking system but it’s not.”

Tracking systems are, however, also available and Willie sees them playing an increasing role in the recovery of stolen machines in the future.

“We’re increasingly having successes in recoveries with tracking systems, whether it’s hardwired or standalone,” he added. “Colleagues down south are finding the same. That’s something we’re keen to ask people to look at. Tracking devices are a covert thing; you don’t advertise that you’ve got the tracking system on your machine.“

Willie fears that people might mistakenly believe there’s apathy within the police to investigate crimes of this nature. To prove that isn’t the case, he cited two recent examples of police helicopters being deployed to aid in the recovery of stolen agricultural quad bikes. Far from being apathetic, Willie and his team are on a mission to engage with the plant industry and open up channels of communication. To support that goal, he’s attended a number of events this year including ScotPlant and the Royal Highland Show.  “It’s about engagement and a visible presence,” he said. “We’d never been to ScotPlant before. A colleague and I went along and, I’ll be honest with you, we thought it would be a long, slow day because previously at the vast majority of shows, people just walk past. But people wanted to engage with us. That’s superb because there was a real appetite to work with us.”

Willie is now in the early stages of organising a seminar, provisionally planned for later this year and targeted primarily at smaller and medium-sized plant firms.  “It’s early days but we’re looking to engage with industry and the hire side of the industry, operators and utility companies. The vision is to have a one-day seminar ideally within a plant operator’s own environment and initially located in the central belt.

“The key will be to tailor a seminar to what the industry needs and wants plus there will be presentations, exhibitors with tracking systems and security products on site.”

In the coming months Willie and his team want to ensure as many people in the industry north of the border realise they are working to reduce opportunities for criminality and make the industry be viewed as hostile to any individual looking to exploit this business area.