RUSSELL Conn was appointed Scottish sales manager at Bell Equipment UK earlier this year, having worked for the manufacturer in South Africa for almost quarter of a century.

Born in Scotland, Russell moved to South Africa when he was 12-years-old.  Upon completing his army duty, he studied hotel management before moving to Empangeni, the birthplace of Bell Equipment.  A meeting with Bell’s marketing manager set off a chain of events that would shape Russell’s career.

Now back in Scotland, Russell recently told Project Plant about the differences between the industry here and South Africa, the changes he’s seen in Bell machines over the past 20 years, and the perils of having dinner in a revolving restaurant…

Q) HOW DID YOU FIRST BECOME INVOLVED IN THE PLANT INDUSTRY?

A) When I left school, many years ago, I studied civil engineering, so the industry was in my blood from an early age. I then went on to study hotel management and catering, becoming the food and beverage manager at Empangeni Country Club – which incidentally is only 20km west of where the Bell factory is located.  It was following this role that I joined Bell Equipment.

The then Bell marketing manager, Mrs Diane Fahn, was a regular golfer at the club and approached me with the job opportunity. 23 years later I’m still here!

Q) HOW HAS YOUR CAREER WITH BELL PROGRESSED?

A) I was very fortunate to be given a position in the marketing team, where I started off handling local and international customer visits.  I then moved onto organising the larger exhibitions for Bell Equipment, including Hillhead in Buxton; Bauma in Munich; Intermat in Paris; Smopyc, Zaragoza; and Electra Mining in Johannesburg.

After spending approximately 12 years in the marketing department, I moved into sales, which I have been involved in since 2006.

Q) WHAT ARE THE BIGGEST DIFFERENCES BETWEEN THE SECTOR IN SOUTH AFRICA AND IN THE UK? IS THERE ANYTHING THE SCOTTISH CONSTRUCTION INDUSTRY COULD LEARN FROM SOUTH AFRICA?

A) I haven’t been part of the Scottish industry for that long, so I don’t feel qualified to say too much on this subject. However, from what I have seen so far there seems to be a lot of small to medium-sized excavators used for muck shifting here in the UK, whereas in South Africa a combination of tractor loader backhoes, shovels and excavators would be used for similar projects.

These different styles obviously reflect the most cost-effective, safest, and quickest way to do the job in the respective countries.

On a personal level, in South Africa I not only focused on the construction industry, but also the mining, sugar and forestry industries. The Bell product range in SA is quite extensive and as such, has product solutions for almost any application in these different sectors. Here in the UK I will be focusing predominantly on our ADT and wheeled loader ranges and working with customers in the construction, recycling and waste management sectors. 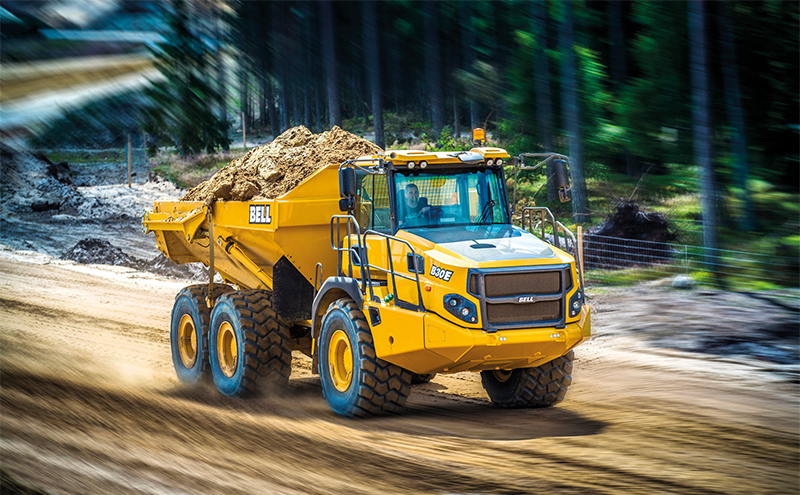 Q) WHAT ATTRACTED YOU TO THE SCOTTISH SALES ROLE?

A) The weather! Actually, my whole family live in Scotland and it just felt like it was time to come back “home” and plant my roots firmly back in the soil. Fortunately, this position had just become available and I was interviewed by Nick in January 2018, whilst I was in the UK on holiday. I was informed in February that I had got the position and moved over in mid-March.

Q) WHAT CAN YOU TELL US ABOUT YOUR PLANS FOR DRIVING FORWARD THE BELL BUSINESS IN SCOTLAND?

A) It’s not so much what “my” plans are, but more about what “we” have in place. We are a small team in Scotland and what we want to do is give the customer the best possible sales and after-sales experience that we possibly can.

As we all know, you don’t only buy a machine. You need 100% back up support and this is what we are striving towards.

Our depot in Falkirk is manned by Gordon Jones, who strives to ensure that the right parts are ordered and are received in a timely manner, whilst our after-sales is run by the well-respected and knowledgeable Jim Dobbie. With the three of us doing what we do best, and with the help of the Bell team in Burton-on-Trent, we can only go from strength to strength in Scotland.

Q) WHAT HAVE BEEN YOUR EARLY IMPRESSIONS OF THE SCOTTISH MARKET? WHAT DO YOU SEE AS THE GREATEST CHALLENGES AND OPPORTUNITIES?

A) I seem to have arrived during a bit of a ‘slow period’, with all the big muck shifting jobs having been completed, but there are a lot of housing estates and other projects on the go, so a different approach on the type of machine we offer is required.

This is where the BELL B20E LGP ADT comes into play. Fitted with a 170 kW Mercedes engine and with a payload of 18 tons, this ADT with its LGP tyres is a sure winner in soft, muddy, marshy, sandy conditions.

Q) WHAT ARE THE BIGGEST CHANGES YOU’VE SEEN IN THE INDUSTRY SINCE STARTING OUT?

A) Technology! I’ve watched the Bell ADT develop exponentially over the past 20 years into the modern, safe, efficient material moving machine that it now is, competing alongside other well-known brands of ADTs in the market place.

Aside from having features such as iTip, Hill Assist, Fleetm@tic, and Keyless Start as standard, the Bell ADT is a “home away from home” for the operator, giving him or her an exceptional ride, as well as having all the creature comforts such as HVAC, cooled/heated lunch box, and air suspension seat for a comfortable and productive shift.

Q) WHAT HAVE BEEN YOUR CAREER HIGHLIGHTS?

A) All of my 23 years at Bell Equipment!

Q) ANY FUNNY ANECDOTES FROM YOUR TIME IN THE PLANT INDUSTRY?

A) On one of the first international visits I arranged, I took a delegation of approximately ten customers to a restaurant in the city of Durban.  Many of the customers had just landed so by the time we got to the restaurant they were becoming slightly jet lagged – and even more so after a few glasses of wine!  One of the customers politely excused himself from the table to use the bathroom.

A few minutes later he returned with a total look of bewilderment on his face. This is where I must mention that the restaurant we had taken them to was a revolving one and the table had moved 90 degrees since the gentleman had left us.

Needles to say, this was the start to what turned out to be a very funny, but fruitful, visit.

A) I enjoy good music, a good movie, watching a game of rugby and a good old strum on the guitar.

Liebherr ADTs won’t have far to travel for upcoming task