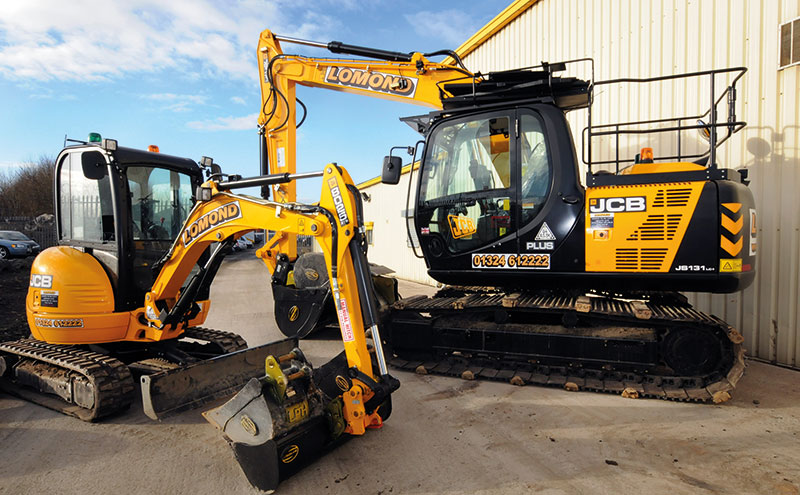 LOMOND Plant’s expansion into the English market is set to gather pace with the Falkirk-based firm now targeting a depot in the Midlands, having already opened one in the north west of the country.

The hirer has experienced rapid growth south of the border, where the fleet size now outnumbers Lomond’s Scottish operations.

Lomond is celebrating 30 years in business this year and has just placed a £12 million order for a wide range of new equipment. 169 new models are due to be delivered in the first two months of 2018.

The firm’s first foray into the English market came three years ago with the opening of a base in St Helens, which now boasts six full-time members of staff. The hire desk is run from Falkirk.

With many of the larger infrastructure projects north of the border either already finished, or due to finish shortly, Lomond’s joint managing director Ross Easton told Project Plant he believes securing a steady pipeline of work in England has been positive for the whole business.

“The St Helens depot has been really good for us,” he said. “It’s now bigger than Scotland in terms of the number of units. There’s a lot more happening in England than Scotland at the moment with new build and infrastructure projects. We’ve had the M8 and Queensferry Crossing projects coming to an end in Scotland, and the Aberdeen bypass project due to finish. If the Scottish market is a bit quiet, England can pick up the pieces. When we first started in England, it was the opposite.

“You’re always looking at how to grow. We had looked at Aberdeen, but that’s a small market compared to England. When you look at Manchester, Liverpool, Birmingham – It’s a big, vast area. It makes sense that if you’re going to expand, then you’re going to expand where the competition is. Where there’s competition, there’s work; that’s what I always say. In terms of the future for us, we’re looking for further growth in England.”

Ross said the aim is to have operations underway in the Midlands within the next 18-24 months, with Yorkshire next on the agenda after that. He hasn’t noticed too many differences when it comes to customer expectations south of the border. Nor has he noticed much reluctance on the part of customers to deal with a Scottish-headquartered firm.

“We’re dealing with the same type of people,” Ross added. “The English market is slightly more competitive because there are more people at it. It wasn’t easy to get in there but we now have a good spread of customers and they’ve welcomed us with open arms. At the end of the day it’s all down to service. The people we’re dealing with are dealing with the people at the top of the company directly, so they’re getting decisions made quickly. If you look at some of the national companies, they’re dealing with employees; they’re not getting snappy decisions. Customers can pick the phone up to me.”

So, how have competitors taken to a firm coming down from Scotland and securing work in their territory?

“I’ve still got my kneecaps!” Ross laughed. “We’re hiring from competitors and, to be fair, we’ve got a couple of good suppliers working with us. They obviously know we’re competitors, they know we’re in there cutting their grass a wee bit but at the end of the day, they can see that we’re hiring from them so they’re making money out of it.

“Obviously you have got other companies who are not happy about it but you’ll get that anywhere. As I said earlier, where there’s competition, there’s work. There’s no point going somewhere where there’s no competition. Companies have come up here from England and are now part of the furniture so there’s no reason why we can’t go down there  and do the same thing.”

The overall Lomond fleet now comprises some 540 machines – all JCB. The latest order was for a mix of excavators, dumpers, rollers and backhoe loaders.

91 of the new machines are direct replacements, with Lomond looking to replace existing kit every two to three years. The newest models have all been fitted with trackers to help prevent theft and aid in the recovery of stolen equipment.

Having been in business for three decades, Ross said the biggest changes he’s seen at Lomond Plant have been based around technology.

“I look back to when I was in the workshop and I don’t see a great deal of changes in terms of how the machines operate,” he added. “The changes are more to do with the electronics and engines. The feel and the control is the same; it’s all the stuff in the background that’s different.

“All our fitters are running around with laptops now. We used to keep 10 pence pieces in the vans and find the nearest phone box to phone in to the office once you’d completed a breakdown. Job details now go straight on to the tablet.”

13-tonne excavators are proving Lomond’s most popular product at the moment, thanks to the growth in the housebuilding market, which Ross believes is what’s keeping the sector going in Scotland.

He cited the biggest challenge facing the hire industry right now as price. “It is so competitive,” he explained. “Costs are going up, particularly operated plant. The cost of operators has gone up, hire rates are staying the same or going down because it’s very tight out there at the moment. England, if anything, is even more competitive. Margins are tighter. You see a lot of older machines in England. The problem with the hire rates being so low is people can’t invest in new kit because they’ve got to run machines longer to make it work for them.

“Our margins have been decreasing every year since 2010 in terms of operator wages against machine costs and hire rate.”

Like many in the construction industry, Ross is waiting to see what potential impact the Carillion collapse might have. One concern for him is the possibility that banks and insurers will start to view the sector with nervousness.  “There’s a fear factor now. Credit insurers are starting to withdraw limits. Banks are getting nervous and the media think it’s just another story to feed on. In 2009 I phoned the bank to get a price for finance for a machine. It was the same bank we dealt with for all our machines at the time. I was told they weren’t financing yellow plant any more. We had 40 machines coming. Some banks panicked. They didn’t look at individual companies, they just decided they were not financing diggers any more. JCB Finance helped us out.

“That (sort of thing) worries me more than anything at the moment.”

Ross described the secret to surviving in such a competitive market for so long has been service and planning for the future.

“It’s about getting out there and seeing people,” he explained. “You’ve just got to build a good relationship with people; that’s what keeps you going. You’ve always got to be looking ahead as well.  You can’t rest on your laurels and take things for granted. You have to get out and see what’s happening, push for new business.”