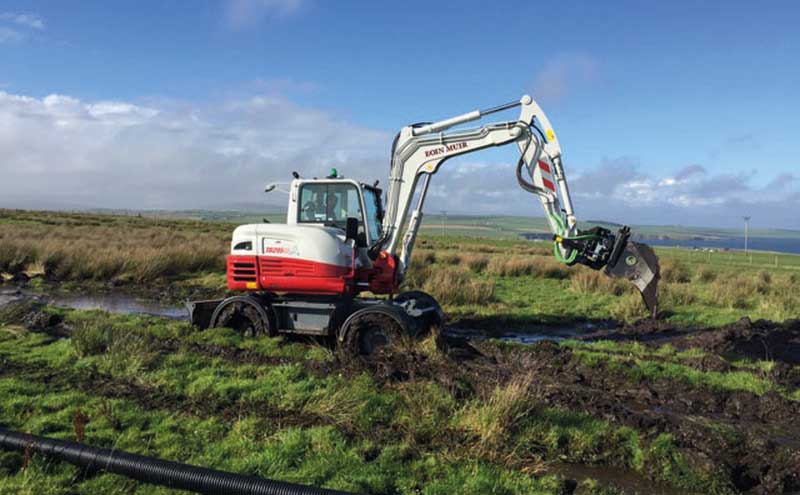 A Steelwrist tiltrotator has journeyed to the Orkney Islands where it will be put to work on a range of demanding projects.

Owner Eoin Muir told Project Plant that the Takeuchi machine was a replacement for his trusty JCB 3CX backhoe loader, which he’s been using for the best part of 30 years.

“The work I do is varied between wet and dry and I’ve always had a 3CX,” Eoin said. “So I’ve had a 3CX probably for the best part of 30 years so this is the first time I’ve been away from JCB.”

Speaking on his decision to have floatation tyres fitted, Eoin said, “I would say she’ll do double the distance in wetland as what the 3CX will, so I’m pretty happy with the way that things are going with the floatations.”

The Steelwrist X12 tiltrotator is designed for excavators with an operating weight between seven and 12-tonnes. The unit has a maximum tilt angle of 45 degrees, a rotational speed of 8 r/m, a rotational force of 5.4 kNm and a tilt power of 29 kNm.

The new excavator will run alongside Eoin’s two other machines – a 14 and a half tonne JCB JS145 and an eight and a half-tonne JCB tracked excavator.

Eoin first got behind the controls of a tiltrotator some 14 months ago, after installing an Engcon unit on his JS145 on the advice of one of his workers. He says he hasn’t looked back since.

“It opens a whole new world, really. Your machine becomes a machine- and-a-half.”

Eoin added that since implementing tiltrotators on his machines, the firm had taken on a lot more jobs, describing work on the archipelago as “plentiful”.

“We do site work for houses as well, but we do a lot more backfilling the floor and pouring the concrete because the tiltrotator can pour concrete far better than just a normal excavator can – there’s a far bigger usage for her.

“We’ve probably enough work for the next six months for handling machines and that’s not taking on anymore, that’s just what’s on the books. That’s not bad at this time of the year because with winter coming it’s usually a quieter time anyway but it’s not quiet this year!”

The Takeuchi excavator and Steelwrist were supplied through Aberdeenshire-based dealer JMS Equipment. Managing director Jim Milligan commented that more and more people are going for tiltrotators nowadays, particularly younger operators, because they believe they can get more out of it.