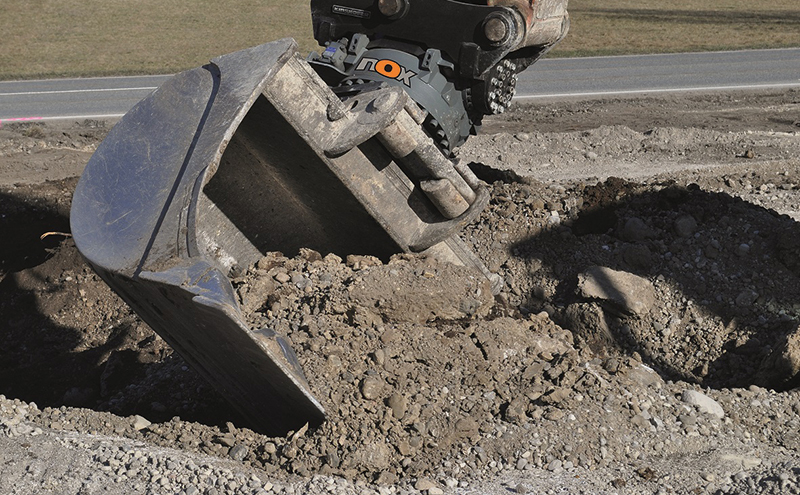 KINSHOFER recently launched the NOX-Tiltrotator Series 3, which has been described by the firm as “one of the most advanced products ever to be attached to an excavator”.

The excavator attachment specialist said the product is the result of years of research and development and claims it is the first product that realises a compact narrow width, reduced height, no protruding parts and features a 360° endless rotation and tilting angles of up to 2 x 55° with operating weight from 3t to 25t.

Alistair Brydon, managing director at Kinshofer UK, spoke to Project Plant during the recent Plantworx exhibition, where the product was officially launched.

He described the NOX-Tiltrotator Series 3 as “extremely robust” – which is critical in the UK market where many operators are not as familiar with the systems as their Scandinavian counterparts and not as experienced in taking care of the machines. A Finnish company developed the system.

Alistair believes the UK market has been increasingly welcoming of tiltrotators in recent years, with the younger generation of operators leading the charge. “We’ve seen quite a change in mindset,” he remarked. “It’s no longer seen as such an unusual product. The biggest interest over the past two years has been from Scotland and the north.”

Alistair spoke of the importance of innovating and bringing new products to the market. “It’s what we’re passionate about; it’s what makes the business interesting,” he said. “We don’t just want to make something the same as somebody else. We want to do something that’s innovative and different.”

According to Alistair, feedback so far on the product has been “very positive” with users citing its ease of use and reliability.

Andrew Little, national sales manager for Kinshofer UK, said the company is built on providing solutions for a global customer base. “Our business strategy is built around delivering innovative technologies to the industry and improving productivity, whilst reducing capital purchase for our customers. The development and deployment of our product range cements our business objectives to be a leading pioneer within the construction sector. Overall, the NOX-Tiltrotator Series 3 is one of the most advanced products ever to be attached to an excavator.”

During Plantworx, Alistair also provided an update on the global expansion of Kinshofer company Auger Torque.

Auger Torque Middle East has been established with the opening of a base in the United Arab Emirates (UAE), following an exclusive distribution agreement of its equipment by United Motors Heavy Equipment, a major construction firm in the region.

Auger Torque was founded in 1998 in Cheltenham, Gloucestershire and still has its world HQ there. The firm makes a wide range of attachments including earth drills, augers and trenchers for construction machinery. The company has manufacturing bases in China and Australia.

Alistair said part of the company’s success has been in understanding the local markets in each country and territory where Auger Torque operates. “You can think what we do in the UK is the best – and it is for here,” Alistair explained. “But it’s maybe not best for Australia or China. We’ve put a lot of time into understanding local markets, having people in those local markets and holding stock there. If someone wants a product, they don’t want to wait six weeks for it to be shipped. It’s also about listening to the guys on the ground, whether they be employers or a distributor, and giving them the flexibility to do what’s best for their markets.”