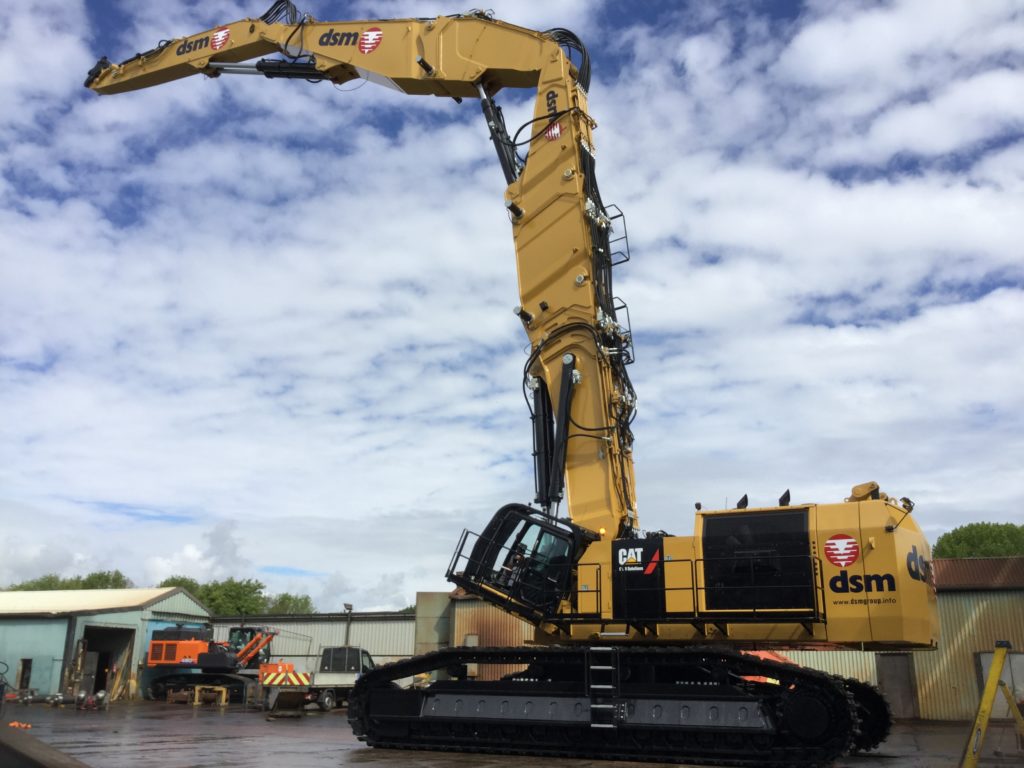 THE “highest and most versatile high-reach excavator in the UK” has proved its worth in the demolition of Tottenham Hotspur’s White Hart Lane football stadium.

Demolition specialist DSM teamed up with Finning, Cat OEM Solutions and Kocurek to produce the bespoke Cat 6015B machine, which tops out at a mammoth 70 metres.

Designed to allow for three different machine configurations, in its 70 metre configuration it weighs 225 tonnes, including an attachment weighing up to 2,500kg.

Finning said that by reducing the boom size, the machine can operate a 7,000kg attachment at up to 38 metres, at the same weight, with its final 32 metre configuration allowing the 230-tonne unit to use a 12,000kg attachment. This has reportedly been made possible following design changes and bespoke engineered components including lengthened track frames, adding a hydraulically extending undercarriage and modifying four hoist cylinders.

To turn the machine into a typical demolition specification, Finning added that a tilting cab with complete FOPS guarding has been added, with full machine walkways for access and safety. A counterweight has also been included.

DSM Director Des Kelly said, “This project is what true industry collaboration is all about. What we really wanted was to create a step change for the industry. So our vision was to invest in a much more versatile machine, that could cope with both high reach demolition and very heavy duty hammer or processor work, to speed up the clearance of a site for our customers.

“So in practical terms, what we now have is a machine that has safety and versatility built into its design. This allows us to sit one unit on a project that can take down a high structure, reconfigure itself once the high rise work is done to speed up the demolition process and reconfigure itself again to complete the below the ground works using heavy duty hammers.

“Commercially the whole project really stacked up for us. Because we co-ordinated and agree a project cost and timeline with Paul Edwards from Finning, we could engage with Cat OEM solutions and Kocurek to make the vision a reality.

“It was definitely not a simple task, as many hours were put into delivering the final product, but now we have tested the unit out demolishing the White Hart Lane stadium, we can see just what a difference it will make to the business and our customers.

“With the backup and service capabilities of both Finning and Kocurek supporting us, I am confident we will be able to safely speed up the demolition process for projects up and down the country. All with the end goal of getting our customers onsite faster.”