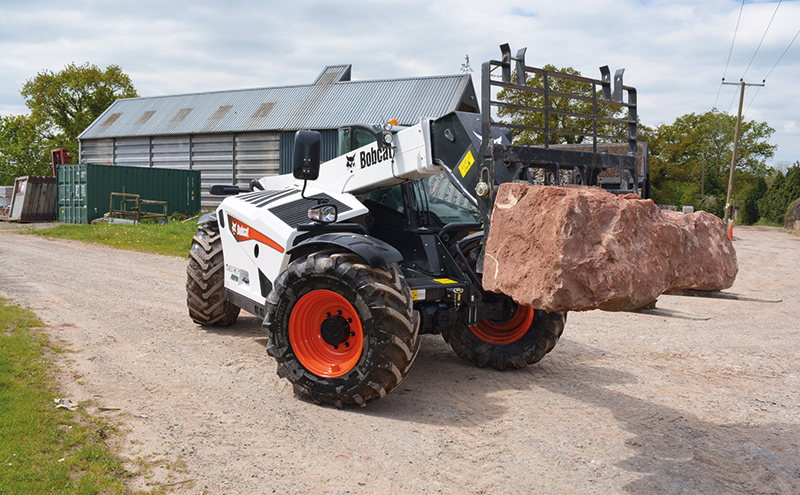 The machine has been put to work at both a quarry processing plant and a farm at the foot of the Black Mountains in Herefordshire.

The business was founded by Adrian Phillips in 2005 on the family farm in Tybubach. The following year the firm opened Llandraw Quarry nearby before taking on Callow Hill Quarry in Monmouthshire in 2007. In 2011, the De Lank Quarry in Cornwall was added to the portfolio.

Adrian Phillips said, “Though we bought it through our Cornwall quarry, the new Bobcat TL38.70HF AGRI telehandler is now working at the central processing plant at Howton Court for the stone from the quarries in Herefordshire and Monmouthshire.  It has taken over from a Bobcat TL360 telehandler, which we have been very pleased with.

“We have switched the two machines so the TL360 is now working in the Cornwall quarry, where it continues to do good work.

“I bought the new Bobcat TL38.70HF telehandler to provide more lifting capacity and a greater lifting height.  At the processing plant, it carries out a range of material handling duties from loading stone into conveyors and lifting pallets to unloading the trucks that come in with stone from the three quarries.  The new telehandler also meets our requirement for having a relatively small footprint, being able to work and move within the confined spaces at the processing plant.

“As well as the extra boom extension, I have also been impressed by the same high build quality we saw on the TL360 and the power and the speed of response coming from the new Bobcat D34 engine.”

Bobcat said the “compactness” of the D34 engine and a new styled low profile engine hood have also enhanced visibility on the engine side of the machine.

Adrian Phillips added, “The new Bobcat TL38.70HF Agri telehandler is fully road certified and set up for towing trailers along the farm roads.  After a full day in the stone processing plant, I tend to bring the new telehandler back to the farm, where it is an excellent tool for farm work.”

The TL38.70HF Agri is described as a productivity and high flow model and belongs to a new range launched by Bobcat for agriculture.

Bobcat plant on course to double activity by 2025