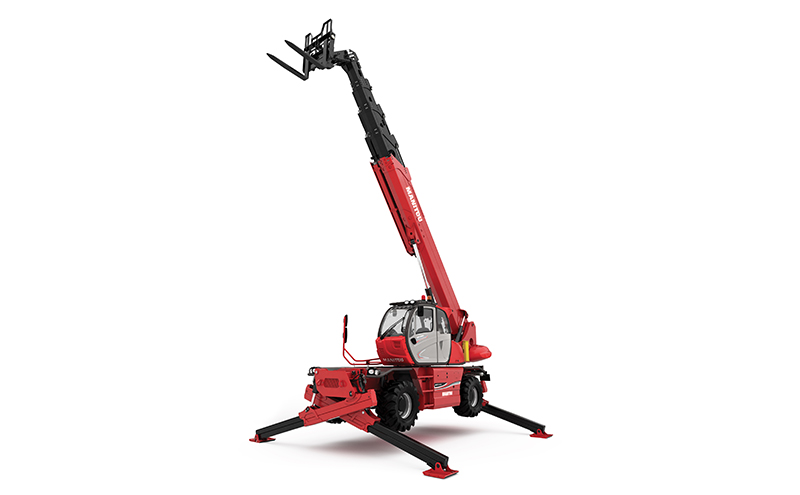 MANITOU has added two new rotating telehandlers for high-rise construction work to its portfolio – the MRT 3050 and MRT 2470.

The MRT 3050 has been designed to meet the needs of the European market. The model can lift up to 5 tonnes and has a maximum lifting height of 30 metres.

The machine’s stabilisers have a deployment length of up to 6.25 metres, which Manitou said increases precision and safety. These are fitted with a strain gauge system for a more accurate and secure detection of the pressure of the stabilisers on the ground.

The MRT 3050, which has a maximum speed of 40 km/h, features a Mercedes 176 hp Final Tier IV engine and a two-ratio hydrostatic transmission. Manitou added that the model fulfils a particularly strong demand in northern Europe.

The MRT 2470 has been described as the first rotating telehandler over 20 metres with a capacity of 7 tonnes.

With a boom reach of 24 metres for a load-bearing capacity of 7 tonnes, Manitou said the model is a response to the needs of heavy high-rise construction.

With its hydrostatic “shift-on-fly” transmission option, operators can choose between a manual or automatic gearbox.

The machine can be raised 23 cm when the stabilisers are completely deployed.

Arnaud Boyer, VP marketing & product development said, “In order to provide our customers with the best solutions, we have incorporated many innovations into these models, giving the user a better performance and greater security.

“With our MRT 2470 model’s very high load capacity, the Manitou group has initiated a new era of rotating telehandlers.”

For indoor applications, a dual-energy engine with an electrical system is also available, allowing noise pollution and gas emissions to be reduced.