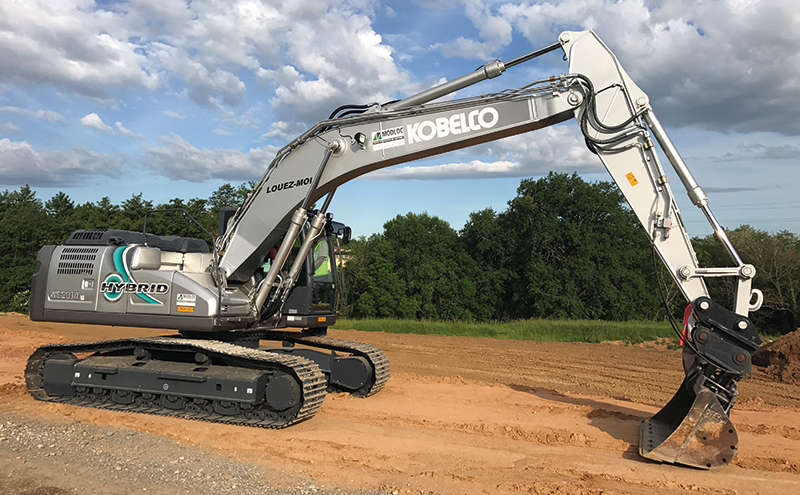 KOBELCO has introduced what the manufacturer claims is the world’s first lithium-ion battery powered hybrid excavator.

The Stage 4 Hino Motors turbocharged diesel engine is the same engine that powers the conventional SK210LC-10.

Kobelco added that the 25 kW power assist of the new generator motor is comparable to the engine output of a larger five-tonne excavator. With the engine in low-to-normal loading, the generator motor reverts to charging the lithium-ion battery.

The stored electrical content also powers the new all-electric swing motor and, according to Kobelco, “gives greater control functionality in terms of response and smooth operation”. Because the swing motor is electrically driven and not directly linked to the hydraulic system, engine load is described as being unaffected.

A further feature of the electric swing motor is its regenerative capability; when the swing motor decelerates, it generates charge to the lithium-ion battery.

Peter Stuijt, Kobelco product marketing manager said, “We are very pleased to finally launch the SK210HLC-10 after many years of innovation and development. Kobelco’s original Hybrid technology has improved significantly since we first displayed our Hybrid prototype at Intermat 2006 in Paris, our latest machine is working proof that Kobelco is a leading authority in hybrid excavator development. The SK210HLC-10 has one of the most technologically advanced systems of all hybrid excavators currently in the European market. Not only is it remarkable for being a hybrid in the competitive 20-tonne class but also for its exceptional ability to increase productivity levels while reducing operator costs. Reduced fuel consumption is a key feature of the SK210HLC-10, but to do so with improved working efficiency and performance is even more spectacular.”