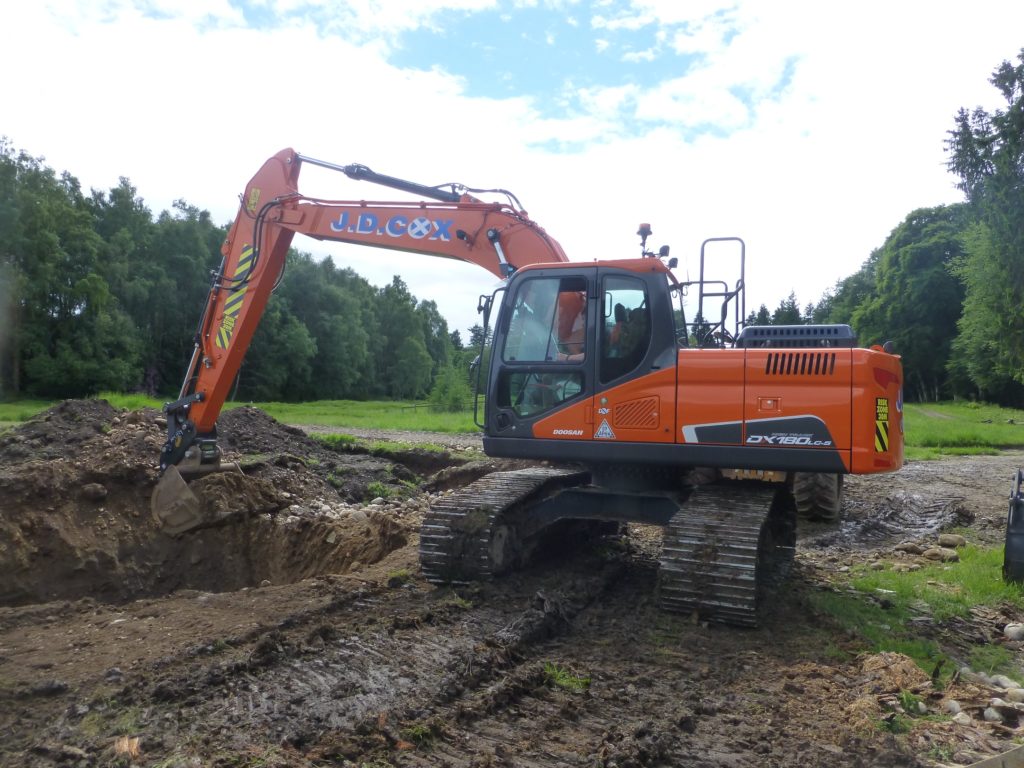 The machine, supplied by Balgownie, is the first in the world and will be used by J D Cox to carry out a range of projects.

The DX180LC-5 HT has been described as an enhanced version of the DX180LC-5. A reinforced structure has been added along with a re-engineered braking system that Doosan said offers a ground clearance of 615 mm, compared to 460 mm in the previous model.

The machine is powered by the Perkins 1204F engine, which provides an output of 94.9 kW (127 HP) at 2000 rpm. To save on fuel, Doosan has developed a system called SPC (Smart Power Control) to optimise the balance between the pumps’ output and the diesel engine.

James Cox, owner of J D Cox said, “The majority of our business is in the forestry sector, building and maintaining the infrastructure including roads and drainage. The bulk of our contracts are for Scottish Woodlands and Tilhill Forestry.

“We explained our needs to David Moir, the local construction sales executive for Balgownie, and he suggested this new machine to us. The DX180LC-5 High Track machine is perfect for all aspects of work in this environment, including the mounding projects that form part of the restocking phase after a forest has been cut down. The high track design and the narrow track width of the machine allow us to easily negotiate all the stumps that are left after the wood is cut – it’s a fact that the stumps and other debris are as dangerous to the underbelly of machines as passing over large rocks when moving about the forest floor.”

Doosan said the model has been designed to satisfy customers looking for a combination of higher ground clearance, a reinforced track frame and a strong traction system with reinforced upper rollers for work in harsh environments and where larger travelling distances are involved.

James Cox added, “As well as helping to replant the trees, the DX180LC-5 HT excavator is ideal for the infrastructure work, building and repairing the roadways needed for the harvesters, forwarders, articulated trucks and other large vehicles to move easily in the forests. Much of the stone used in the road building, we win ourselves using the DX180LC-5 HT excavator equipped with a breaker.”

SANY ramps up recruitment drive ahead of ‘very busy’ 2022