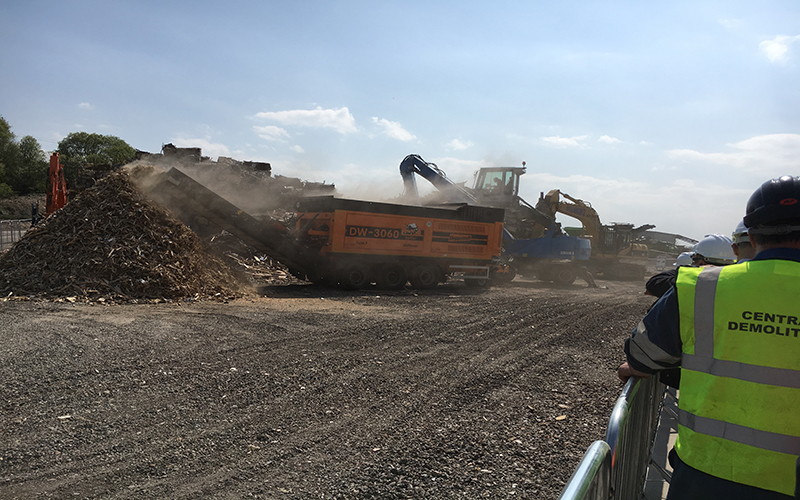 Visitors to the Blue Scotland HQ in Stirling and Central Demolition site in Bonnybridge witnessed a range of machines in action including a Doppstadt DW 3060 shredder, a Powerscreen Premiertrak 400 jaw crusher, a 1000 Maxtrak cone crusher and a number of EvoQuip and Fuchs machines.

Daniel Tomlinson, Blue Group marketing manager, told Project Plant the event was a perfect opportunity to spend quality time with customers, build relationships and demonstrate precisely what the equipment is capable of.

“People come to these things and buy,” he explained. “They see machines working that they’ve not seen before. We’ve taken customers to Powerscreen and Doppstadt events in the past and they see the machines and say, ‘Wow, that’s impressive, I’ll take one’. You can spend time with customers, build a relationship and have a couple of beers. We’ve got guys here who are really interested in the machines; they’re seeing the machines and learning about them. You’ve got guys talking about the features and benefits.”

Daniel said feedback to the event, which was held over two days and included tours of Blue Scotland’s new premises, has been “really positive”. For many customers, it was the first time they’d set eyes on Blue Scotland’s three-and-a-half acre site at Broadleys Business Park, which the firm relocated to last year.

“The company’s growing all the time,” Daniel added. “The thing about Blue is that, genuinely, we go further than most other suppliers. We’ve got to get our message across to customers. At the facility they would have seen our spare parts. We’ve got service guys on the road all the time, servicing machines, fixing any issues, so it’s important for us to get those messages across.

“The new Scotland facility just shows the direction the business is going, where we’re at and where we want to get to. Plant is a big investment; people want to know that if they’re putting their money – potentially hundreds of thousands of pounds – into a plant, they want to know that company is going to be around for a long time. They don’t want somebody who’s not going to be there six months later. They need to be around for the life of a machine. When they see a facility like Blue Scotland, they know we’re serious, that we’re here for a long time and investing in spare parts to keep the machinery running.”

Daniel believes the sector, generally, is in a healthy place right now. “There’s a lot of external factors with Brexit and various other things,” he added. “(There’s) a lot of unknowns. For me, the industry is healthy. I speak to our competitors and they’re busy, which is good. We’re growing all the time; our competitors are healthy so the industry must be in a strong position.

“We’re in various industries; we’re in quarrying with Powerscreen, we’re in waste with Doppstadt and BlueMAC, we’re in scrap metal with Fuchs. So we’re in a lot of different sectors, which is good for the business as if one’s struggling, another one can take over. But they all seem to be in a healthy position.

“We had our record year last year, when we turned over £100 million, which is a huge achievement. We have had an incredible start to 2017. The challenge is to try and beat that.”