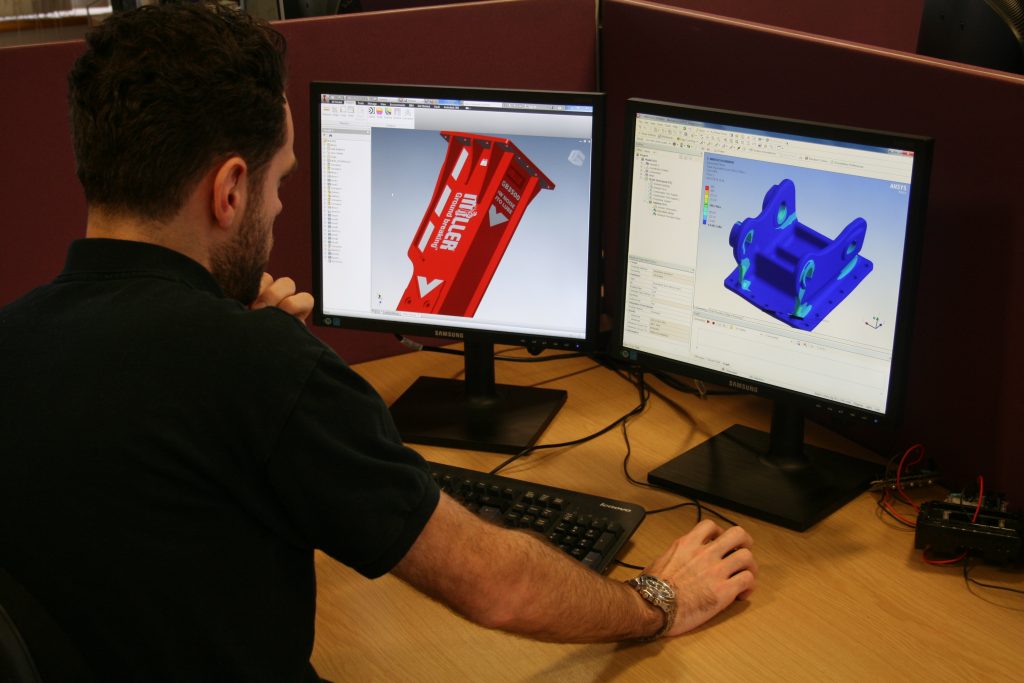 Earlier this year, when the Construction News Award for Commercial Innovation of the Year went to Miller UK, the company’s hydraulic breaker was thrust into the spotlight. Created in collaboration with plant hire firm Hewden, it directly addressed the need for extended service intervals and minimising downtime, while also reducing the risk of theft.

Keith Moody, head of engineering at Miller UK explains how reducing downtime was one of the key driving factors in the development of the new breaker, which incorporates three key features; a top bracket designed to fit multi OEM machines and sizes, an optional tracker device and an automated lubrication system.

POWER delivered by breakers has nearly tripled over the past 20 years, but this should by no means be the only consideration. A powerful breaker designed with additional features to ensure it performs efficiently will ensure operators benefit from improved productivity and reduced maintenance, providing more value in the long term.

One area which can sometimes be neglected when contractors are under pressure is regular maintenance of machinery on site. Breakers in particular should be greased at least every three hours and this can breed frustration as productivity stops but as time-consuming as it is, it’s vital as one of the major causes of damage to attachments is down to poor maintenance. Reducing time spent on maintenance, no matter how tempting it might be, invariably means unplanned downtime which will impact on the project’s profitability with additional costs for repairing or replacing the breaker as well as the cost of delays to the project.

With this in mind, the new breaker was designed to incorporate an auto-lubrication system, which greases tool components during use to maximise tool uptime, save operators time and energy and extend the life of the attachment. Not only does it remove the need for operators to stop work every three hours to manually grease the breaker, it also makes the process much safer as the operator does not have to leave his cab, avoiding the potential dangers on site without having to move the machine to a safe place first.

Unplanned downtime caused by a breaker blank firing, when a hammer’s tool strikes into the air rather than against rock and can cause a huge amount of internal damage to a breaker, can create delays on a project and also incur additional unforeseen costs. With its auto-stop system, Miller’s new breaker is able to prevent breakage to components when blank firing occurs, while its large diameter through bolt prevents the loosening of nuts by imparting a higher torque, thus minimising through bolt fracture.

Data suggests the breaker is around 15% more efficient than its competitors, with firms reporting increased productivity due to low oil temperatures and longer periods of operation without loss of performance.

It’s not just poor maintenance which can lead to downtime but also attachment theft, which is thought to be costing the UK construction industry around £1 million per year and invariably leads to long delay on site while replacement machines are sought.

The breaker’s optional integrated tracker device is designed to combat this issue and its first big success story followed not long after it was launched last summer.

Specialist retail and forecourt construction contractor Williams Southern hired the breaker and, in August 2015, contacted Hewden to inform them that it had been stolen. Hewden immediately alerted Automatrics – the company responsible for monitoring the breaker’s built-in global positioning satellite tracker.

The efficiency of the recovery process was remarkable; the initial report of the theft was made to Hewden at 10.46am and by 5.19pm that evening the stolen attachment was found by police in a van parked at a roadside.

Miller’s enabling of the retrieval of stolen breakers is saving people time and money – not to mention saving relationships between plant hire firms and constructors.