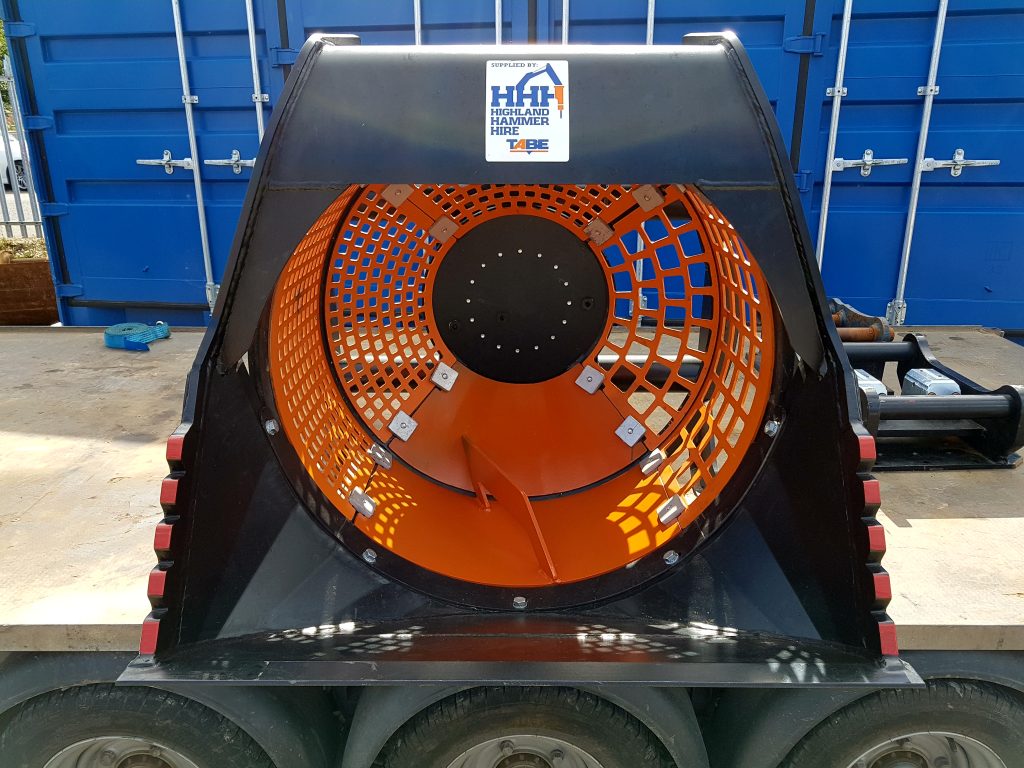 INVERNESS-based Highland Hammer Hire is seeing out the year with a bang, having recently wrapped up a “brilliant” deal for multiple attachments that had its inception at this year’s ScotPlant.

“The deal started at ScotPlant,” Callum Mackintosh, owner of Highland Hammer Hire, told Project Plant. “I’ve known the customer for a while and he came to visit me, looking for a solution for his attachments.

“Originally he had a problem with connecting hoses on his attachments from his breaker to his compactor and he invested in a competitor’s make of hydraulic quick hitch but, progressing with the concept, he wanted to buy a tiltrotator.

“The competitor’s product wasn’t very compatible with the tiltrotator so he came to see what we could offer as a package of attachments, tiltrotators and EC-Oil-type systems.”

On the back of that initial enquiry, the firm went on to invest in a range of attachments.

“Productivity is the key,” said Callum. “The customer appreciates that attachments are there to make life easier – it’s about working smarter, not harder.

“He appreciates the right use of them so from looking at a fully hydraulic quick hitch that does away with your hoses, all of a sudden using a crusher bucket on site is a more attractive solution because you’re getting more utilisation out of it in a day. The crusher bucket came to light and then we ended up pricing that and getting that sale of a new TABE CT15 crusher. Likewise with the TABE CCT5 screener bucket and the Engcon selector grab and compactor. Piece by piece, it all fell into place and started to make sense.”

John Craig of JCC Engcon carried out the installation of the Engcon equipment.

Callum said the reaction from the customer has been “outstanding”.

“From a tiltrotator point of view, the full EC-Oil Engcon units he got were the first to be delivered to the United Kingdom with the removable gripper and that in itself has made it versatile for laying kerbs and placing awkward materials – they’ve found themselves so much more productive.

“Even down to the screening bucket, which we supplied a concrete mixer conversion kit for, he’s found that they’re saving and recycling more material on site. They’re doing away with labour; just having a selector grab on the job has done away with having two or three men sorting through demolition waste or sorting through roof timber.

“It’s made a massive difference to the way they work; it is a lot easier and a lot safer.”

“I felt the deal was fantastic,” said Gavin Brown, whose firm does a lot of groundworks for housebuilding projects, as well as bespoke one-off housing projects.

Gavin explained that he has five machines ranging from 8-and-a-half tonne to 15-tonne and his goal was “to be able to utilise attachments and buckets throughout the range”.

“What we’re trying to achieve with the EC-Oil and the tiltrotators is to get maximum productivity out of what we’re using,” he said.

Speaking on the TABE screening bucket he purchased, Gavin said, “The main thing was the TABE bucket comes with no case drain, which makes it ideal to work underneath the tiltrotators, rather than just on the end of the boom.”

“We break a lot of rock out and essentially we’re producing our own material on site with that,” he explained.

Gavin added that in the weeks following the deal, Callum spent time on site with the machine operators, giving advice on the equipment.

“There are going to be teething problems when you change over systems and that attention that he’s given to the operators has probably saved me 30 or 40 phone calls from the guys just asking about this or that – it’s rare to find someone whose attention to detail is such that they’ll take time to do that.”