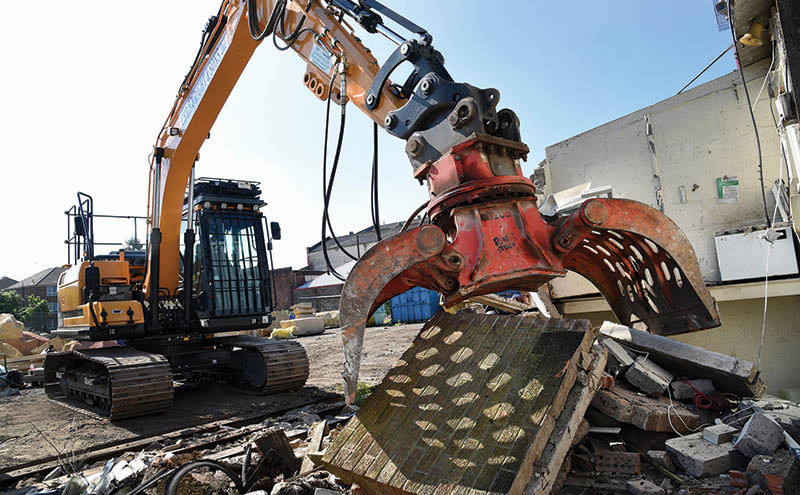 The machine, which made its UK debut at this year’s ScotPlant exhibition, was supplied by Stirling-based Young Plant Sales.

“We bought two Hyundai 220s previously and decided that we needed a smaller one,” explained Kris Wright, of Chris Wright & Sons, speaking at a demolition project in Govan, Glasgow.

“We’ve had a great response to the new machines from our operators and we’ve had good service from Young Plant so we thought we’d go for it.

“It’s for compact jobs where you haven’t got a lot of room but you still need the strength of a bigger machine – it’s still quite powerful.”

The machine’s cab features an 8-inch interactive touchscreen cluster monitor that includes a haptic remote control. Kris said, “The Hyundai cabs are good; they’re quite big and have all sorts of gadgets in them.

“There is a camera on the front, back and sides of the machine and they work with each other.

“You can watch one individually or all four at the same time and they’ve set up a system where it uses all four of them and you can actually get a bird’s eye view and when the machine is swinging you can see what it is going near…in other words, there’ll be no excuses for hitting things!”

The HX140 L has been kitted out with the necessary extras to make it suitable for demolition. Kris explained, “It’s a full demolition spec machine. The extras include extra hydraulics and a grab attachment that lets the machinery spin. It also includes a bracket for a manual attachment.

The HX140 L is the only machine being used for firm’s current contract. Kris explained, “Today, the job is a steel cladded building with brick walls and sides, with a steel frame.

“The plan is to take the steel cladding off, knock the brick walls in and we use the cutting equipment to knock the steel beams down, clear it all away and then we break up the slab, clear the site and that’s it.”

Chris Wright & Sons was founded by Chris Wright in 2005, with sons Kris, Thomas and Shaun taking on roles in the company.

“We started off as a plant hire company,” Kris said. “We started getting a lot of questions asking if we could demolish this or that and eventually it grew to be more of a demolition company.

“We’re hoping to branch out, we like the demolition and we want to keep it going,” he added.