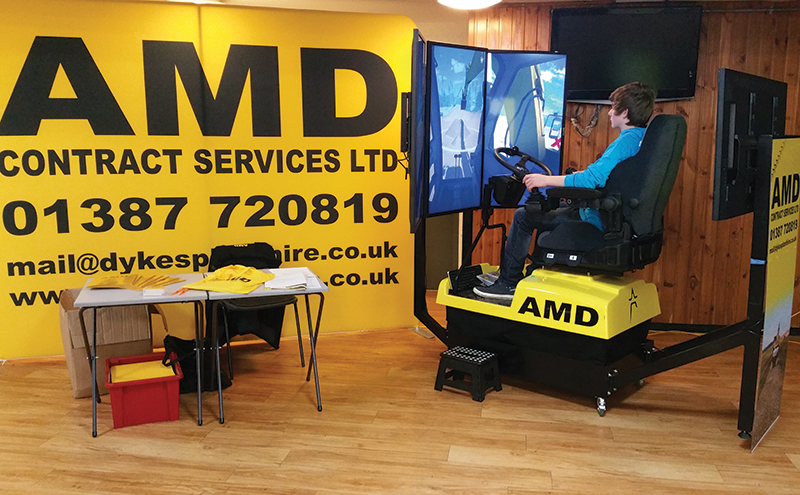 DUMFRIES-based AMD Contract Services has invested in a simulator that recreates the controls of a wide range of plant machinery for operator training purposes.

The firm has been taking the machine around local schools to give youngsters a taste of life as a plant operator in a safe and realistic environment.

AMD hopes the simulator will encourage school pupils to give serious consideration to a career in the plant industry and help address some of the skills shortages the sector is currently experiencing.

“There’s a different range of exercises for each machine and it also includes industry specific testing like CPCS.

“You can pretty much simulate whatever you need.

“We’ve been taking it around local schools and academies, trying to educate younger people who are unsure about what to do, about plant operating jobs.

“We’ve worked quite closely with Lockerbie Academy. Their headteacher’s always on the phone saying they’ve got someone interested and asking if we’ve got any apprenticeships coming up.

“The feedback we’ve had from boys and girls of all ages has been really positive. Some who had never thought about a career as a plant operator are really keen.

“The controls are exactly the same as the real-life models. When you dig into the ground and the machine moves forward a wee bit, the simulator moves forward too. You can change the sensitivity, speed it up, slow it down.”

The simulator also generates a report every time someone uses it, informing them exactly how they’ve performed.

AMD director Fraser Dykes, who’s also the president of the Scottish Plant Owners Association (SPOA), made the decision to purchase the simulator following a demonstration from the Swedish-based manufacturer Tenstar at an SPOA event.

He explained, “I bought it the same night. Companies are hiring it for open days and such like. We’ve had it at the Help for Heroes recovery centre in Edinburgh, and we’re working with Scottish Prison Service to try and get involved there to help with rehabilitation.

“Construction has always been seen as the bottom line. If you didn’t go to university or college or couldn’t get a job on a farm or a supermarket, you went into construction.

“We’re trying to show kids that there’s a technical edge to construction and what they can achieve there.

“We’re getting tremendous feedback on it.”