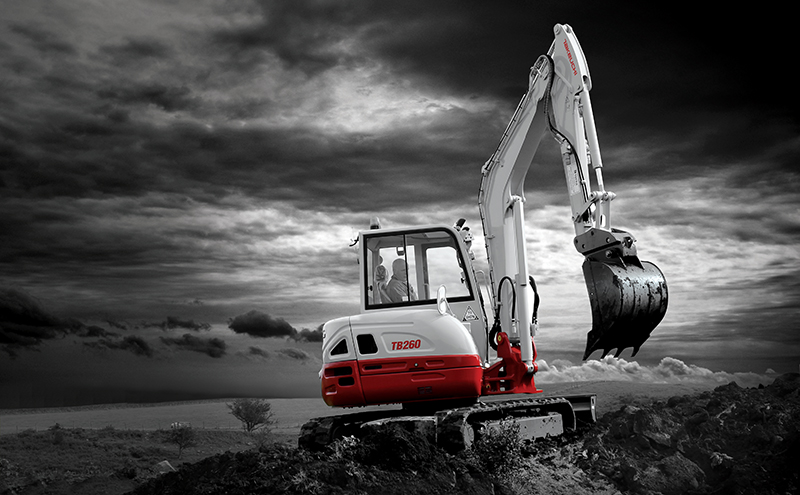 Takeuchi UK has come a long way since establishing a home in Rochdale, Lancashire in 1996. Gary Moug reports on how the firm has become a major player in the British and Irish plant markets.

TAKEUCHI’S distinctive red and grey machines have become a firm feature on UK building sites and a wide variety of projects all over the country.

Such is their prominence, in fact, that it may come as a surprise to some to realise Takeuchi’s UK venture only started 20 years ago.

The Japanese brand has developed an enviable reputation for reliability and quality in a short period of time since the company established a base in Rochdale, Lancashire in October 1996.

A thriving dealer network has helped Takeuchi grow in the UK and firmly establish the company as a major player in a competitive marketplace. Evidence of this lies in the fact Takeuchi UK recently sold its 25,000th machine and the British and Irish market now accounts for a significant share of global sales.

The story of Takeuchi dates back to 1963 when a mechanical engineer in Nagano, Japan called Akio Takeuchi founded the business with a capital investment of just £3000.

One of the firm’s claims to fame was the invention of the world’s first compact mini-excavator in 1971 – the TB1000. The inspiration for the machine is said to have come from a local builder who approached Mr Takeuchi looking for “improved efficiency”. The mini-excavator soon replaced the manual bucket and shovel on construction sites all over the world.

In the 1980s, Takeuchi went international with the opening of Takeuchi USA in Atlanta, Georgia and the development of the world’s first track loader for the US market, the TL15/TL20.

Although Takeuchi machines were already being sold in Europe, the plan to formally promote the brand name in the UK and Ireland materialised in 1996 with the founding of Takeuchi Mfg. (UK) Ltd. Takeuchi’s dealer network in this part of the world has gradually expanded since then and today numbers more than 30 dealer depots.

To meet demand for mini-excavators, Takeuchi opened a depot in Thatcham, Berkshire in 2002 to serve customers in the south of the country.

The success story continued in the UK and Ireland, followed by year on year introduction of new excavator machines to meet the growth in demand.

Takeuchi’s sales come right across the range from 1 to 15 tonne but without doubt the popularity of the 1.5 tonne has proved most significant. This still remains the country’s most popular size of mini digger and Takeuchi “remain no 1” with the TB016 now superseded by the TB216.

By 2008, Takeuchi UK had outgrown its original Rochdale premises and invested £5 million in a 56,000 square foot facility in the town with a massive increased stock capacity. The new base, which is four times larger than the previous one, includes a purpose-built parts and service centre and a training centre.

Recent years have seen the introduction of more new machines and innovations including the new 4, 6 and 9 tonne weight class options TB240, TB260 and TB290. Wheeled excavators have got bigger with a 10 tonne TB295W and for a compact short-tail radius machine there’s the TB215R or the recently launched micro TB210R.

A programme of continuous product improvement has seen replacement models. In the past 12 months a new 3 tonne TB230 was unveiled and the firm says we should look out for the new 15 tonne TB2150 due to arrive later this year.

Tomonori Tamaru has been managing director of Takeuchi in the UK since 2009 having previously worked for Takeuchi in his native Japan. He asserts that it is Takeuchi’s product quality that makes all the difference in an established rigorous construction plant market like the UK and Ireland. Here plant managers have high demands but Tomonori said the “reliability and good quality” of the Takeuchi machines meant they were able to make gradual inroads, supported by a “good reputation for service backup”.

Tomonori explained the expansion of Takeuchi’s dealer network across the UK was also pivotal. “The dealers have local strengths, local knowledge,” he told Project Plant. “If we tried to do everything ourselves it would be very difficult. Local dealers know the local market very well. The backup is also key.

“We knew the product was good. (The challenge) was getting the message out to the market. Most of the feedback from customers was really positive. The main feedback was that the machines didn’t break! They are reliable and smooth to operate.

“The machines are not jerky. You cannot tell that just by specification. We started seeing operators demanding Takeuchi.

The Scottish market has started to embrace Takeuchi machines, particularly in the past decade.

Tomonori said the reliability of the products makes them ideal for the Scottish market, where operators are often working in isolated areas and can’t afford to have equipment that is regularly breaking down.

“Our Scottish market was almost zero when Chris Bushell (UK sales manager) joined in 2005,” Tomonori added. “His first task was to develop the Scottish market. JMS (based in Aberdeenshire) was our first appointed dealer in Scotland. (MD Jim Milligan) showed what Scotland can do and we gradually built our dealer network. I can see Scotland is more suitable for Takeuchi. There are more owner-operators.”

For Tomonori and the small but experienced Takeuchi UK team, the challenge now is to continue developing the brand.

“We will continue pushing our quality and try to increase our market share,” Tomonori added. “We have a newly opened major manufacturing facility in Japan to meet growing global demand. Our parts department is much improved (since changing location in 2008). The size of the building gives us storage that is more suitable for our business. We now can offer more service training in a more professional way.”

Takeuchi’s move to much larger premises couldn’t have overlapped at a more difficult time for the plant industry, with the global financial crisis just about to strike.

“It was very, very painful for everybody,” Tomonori recalled. “First of all we looked everywhere we could to save costs. Sales were less than half suddenly. People just stopped buying.”

Tomonori is optimistic about the future but admitted some people in the industry have become “very cautious” since the recession. “People are taking longer to make decisions,” he explained. “The other side of the coin is that people are thinking more. Hopefully the result will be a better and more sustainable industry sector and the same mistakes will not be made.”

Chris Bushell, Takeuchi’s UK sales manager, first started selling Takeuchi machines for a dealer in Manchester in 1999. He remembers the difficulties in the early days of trying to establish an as then little-known brand in the market. “People used to say Take-what!” he said. “We just needed to get hire companies and operators familiar with the brand; those early sales certainly took us from zero to hero in a very short space of time. The very first Takeuchi machines sold in Britain (in the early 1980s) were orange and branded as Priestman Mini Mustang. The turning point was when the actual brand Takeuchi (created) a UK location and stocked parts.

“Because Takeuchi had been reliant on importers up until that point, there was a stigma that the machines were great but you couldn’t get parts. We’re well away from that now. Having been involved for a reasonable length of time, I remember when we first went to Scotland. My brief was to set up a dealer network in Scotland. At our first Highland Show, we took a girl to sell our merchandise – hats, jackets, fleeces – and she couldn’t give it away! I knew we’d made it when, about four or five years later, the same girl with the same stock had people queuing up to buy it. To achieve that (in such a short space of time), you know you’ve arrived. Having a dealer network instilled confidence in the end user.”

A long-standing Takeuchi dealer is JMS Equipment, who look after the north of Scotland from their base in Turriff, Aberdeenshire. Managing director Jim Milligan says the firm “hasn’t looked back” since becoming an official Takeuchi dealer in 2006.

“I was fairly familiar with Takeuchi machines as we’d used them ourselves,” Jim said. “When I was approached by Chris Bushell to see if we wanted to be a dealer, I said we’d give it a go. I wouldn’t sell anything to anybody that I wouldn’t buy myself. You’ll never buy anything as reliable as a Takeuchi. It’s a well run and efficient company. You never get any complaints about their machines.”

Jim said that whilst most people in Scotland had never heard of the brand, a quick demonstration would quickly make them understand what the machines were capable of.

“A lot of folk thought it was a new product at first,” he recalled. “I would say ‘No, Takeuchi invented the mini-digger!’

“It is very difficult (establishing a new brand) but once you got them into the seat, they changed their mind. They’re so smooth, powerful machines. Operators just love them.

“The first new Takeuchi machine I sold was to a company that refuses to buy anything else. Everything they have is Takeuchi. They’ve had demonstrations of various machines but nothing has been a patch on them.”