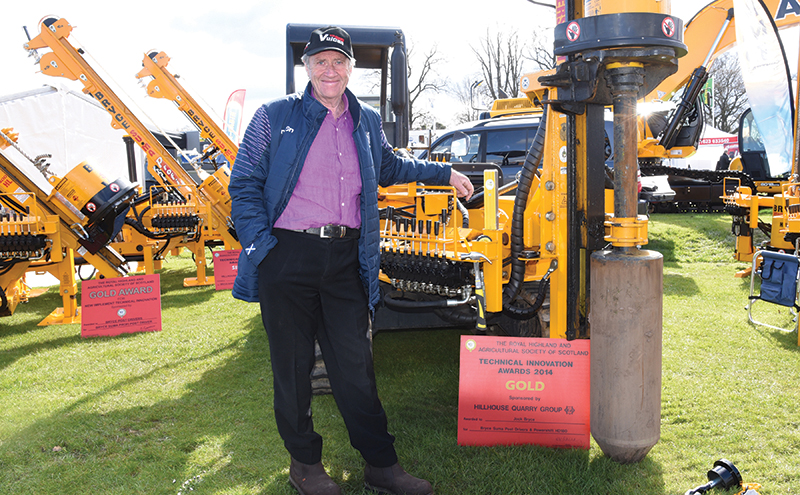 JOCK Bryce has been operating, designing and developing post drivers for 39 years. When he decided 20 years ago to enter the commercial market a prototype was built and since then, and with hundreds of design changes and patents, the result is market-leading post drivers which have been described as the benchmark or Rolls Royce of machines.

Jock is the founder of Kelso-based family business Bryce Suma, a manufacturer whose tractor-mounted post drivers are sold in 15 countries around the world and his one-man tracked fencing machine, the Bryce 180 Pro, is now operating in 10 countries.

All his post drivers, which are used for a huge variety of fencing and hole-punching operations, have won top innovation awards and are constantly being upgraded for use in sectors including civil engineering, pile driving, agricultural and industrial fencing.

The numerous prizes include a stack of Gold, Silver and Lamma Awards – the highlight being three Golds in one year (at the Royal Highland Show, the Royal Show and Royal Welsh Show). This remarkable achievement was something which had never been done before and what is even more astounding is that  it came  from a small family business that was up against massive international companies. Many tributes have been paid to Jock’s patented designs and abundance for innovation and excellence.

For Jock though, it has become a labour of love and he’s immensely proud of the fact that products produced in the Scottish Borders are being utilised around the world – seeing himself as an ambassador for his country.

He told Project Plant, “I used to farm with my father in the Cheviot Hills in the Scottish Borders. We had to leave the family farm due to his ill health and after five years of shepherding and farm management I started my  own business with the focus on fencing. That was over 40 years ago.

“I had no money and had to try and  work out how to do the work easily and quickly. Of course when I started off it was all hand work but I quickly became very frustrated due to the heavy workload and obviously couldn’t get near the output required and had to mechanise. So I quickly  went from using a handheld auger to a tractor auger, and then I bought my first post driver for £1160 and couldn’t sleep at night for worrying about how I was going to pay for it. Three years later I bought another one for £1340 and of course I had to fund the cost of two tractors as well. As a one-man band, these two outfits allowed me to keep all my customers happy as I could split my time between two people without having to move equipment.

“However I still wanted something that would make the job faster and easier because all the work I did was on hill ground.”

Jock began to build various other post drivers with improved features and performance and, in 1997, he introduced his first post driver to the commercial market.

“We’ve had tremendous success with these machines and everything is produced onour own property based near Kelso.

“I’ve patented about 15 different features to maintain a high degree of exclusivity in the market. It has cost a lot of money but it helps me retain my intellectual property rights and will prove an insurance and lasting legacy for the family.

“If you want quality like a Mercedes, that’s the quality and performance  you get when you buy a post driver from us. We build them for performance, durability and reliability. I spoke to a contractor yesterday who has a five-year-old machine he’s never had to lay a spanner on. Another has an eight-year-old machine he’s never had to touch apart from regular greasing and the occasional hammer rope.

“Having been born , brought up and worked on our own hill farm, and then fenced on my own in hill country, I understand what’s required and never liked things breaking down when in full flow in the middle of a working day. That’s why we build machines the way we do.

“I’m hands-on. I’m a working man. I’ve got no letters to my name. My ancestors were shipbuilders and engineers in Belfast.”

Jock’s father was an innovator himself and patented a device for transporting haystacks from field to barn with a small tractor.

Before Jock got into full flow with his post driver designs, he patented three products for permanent electric fencing. Jock believes he’s benefited  from a “genetic throwback” in that he’s inherited an ability for creating innovative designs.

“It’s in there somewhere,” he explained. “I wasn’t academic at school but did well with technical subjects and couldn’t get away from school quick enough.

“Being brought up in the Borders in the midst of hill farms I was amongst  guys who were bringing out sheep  and cattle for the show circuit. These stocksmen were dedicated people who were meticulous in their attention to detail and every year tried to go one better, so that influenced me and I had a strong leaning towards that . What I’m doing now is very similar, only with metal. The process is the same. I keep trying to go one step further.”

Jock’s flagship products include the Bryce 180 Pro, Bryce Vulcan VR800 and the Bryce Forest Supreme. “The top  models have up to 175 tonnes of hitting power available for driving heavy  metal piles and hole punchers but they also allow you to put in big, heavy straining posts in less than a minute in moderate ground conditions,” Jock said. “That means less strokes, less wear, quicker cycle times and more profit. The quicker the job gets done, the quicker you can move on to the next one and the higher the throughput at the end of the year.

“The tractor-mounted machines have a host of patented features, forexample the auto-telemast, rock spike transfer system and quadshift. Likewise with the new Bryce 180 Pro one-man tracked fencing machine, which is also patented and with others pending. This innovative and versatile design rotates from left to right through 180 degrees, can be driven in both directions by way of a cab-mounted rotating seat or by hydraulic dual controls, which can be operated from the ground.

“A novice can get good results very easily with these machines. They’re user-friendly. All the controls are natural.

“I’m not into electronics at all because of the issue of long-term reliability. We have had problems with failed electronics on vehicles ourselves. Speaking to modern-day agricultural dealer workshops and truck servicing workshops, they seem to have a daily stream of electronic issues to deal with.

“If you are out working in remote areas on your own, or even with a gang, the last thing you want is your prime machine to break down and having to get an auto-electrician to travel miles at £50 an hour to try to identify and rectify a fault.

“It’s about designing and manufacturing equipment that’s as near bomb-proof as possible. People often remark at the shows that you can see the quality in the product by the way it’s built and put together.”

Jock’s wife, Jennifer, looks after the administration side of the  business while his sons, Andrew and Stuart, are involved in the sales, works and logistics areas. A third son, Ian, has his own carpentry business.

“They’re all blessed or cursed with their father’s genes in terms of having to do the job right and attention to detail,” Jock laughed. “Some people say we’re tough to work for by way of the standards we set – I can spot a pinhole in a weld! I’ve been described as a hawk in the fabrication shop!

“I sometimes do a lot of my thinking and development in the wee small hours lying in bed when I rehearse my new designs and what I’m thinking about. It’s a bit like amateur dramatics – you have rehearsals and by the time you get to the first night, you’re ready. Sometimes when Im doing this I’ll realise something won’t work so I go over it many times until I resolve it. When I come to put it together in the fabrication shop, I’ve already made it umpteen times in my head.

“I draw new parts out using a bit of cardboard and then get card drawings made up. It’s an old fashioned way but my overheads are minimal. There’s a hell of a lot of effort goes into getting any new designs made and then promoted in the marketplace.

“When I was a wee boy I used to love walking into the local blacksmith and seeing things being manufactured and repaired. I loved the challenge of maintaining equipment and driving tractors on steep hill ground. That was my place – engineering and farming.

“The blend of these two things makes you into what you are and allows you, when you get the freedom, to express yourself. I’m self-taught. My work is my  hobby. But it’s important to point out that I’ve got a great team behind me. Without their help, none of this would be possible.”