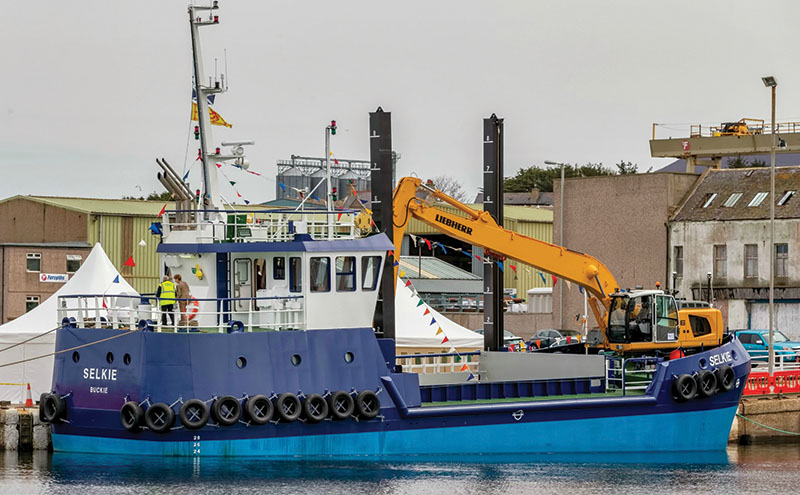 LIEBHERR-Great Britain has designed and supplied an excavator for direct mounting on Moray Council’s new £2.5 million dredger, named by local schoolchildren as the MV Selkie.

The Liebherr 936 machine, supplied with marine specification and two excavation buckets, unloaded 260 tonnes from its hull in half an hour on its first trip.

Moray Council is responsible for the maintenance of six harbours and is the only local authority in Scotland to own a dredger.

The 250 tonne MV Selkie was custom built at Macduff Shipyard in Buckie and is a replacement for the Council’s previous dredger, The Shearwater, which was sold for scrap four years ago.

Liebherr was involved with the project from the ship design stage and worked with Macduff Shipyard’s own design team using Liebherr drawings. 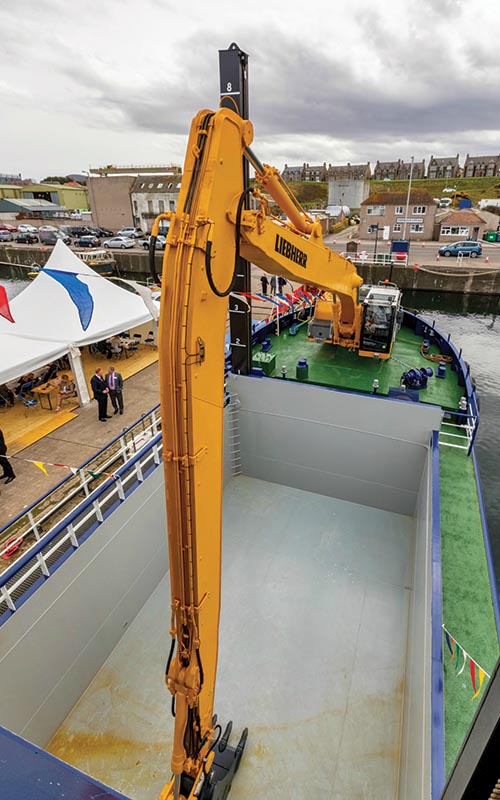 “The brief was for an excavator to be directly mounted on the front of the ship with a support turret that matched the Liebherr swing ring gear, also supplied by Liebherr, and the ability to dredge up to 8 m under water,” Liebherr explained.

“The 936 has been supplied with a marine specification, which includes water resistant paint and both a foam-filled dipper arm and seals on all pins and bushes to prevent water ingress and internal rusting.

“It has also been supplied with two excavation buckets plus additional hydraulic circuits and pipework, including a boom and dipper arm, to allow the use of various attachments, such as a clamshell bucket if required.

“And for efficient underwater excavations, the 936 is fitted with the Prolec pcX-pro 3D positioning product that allows the operator to view what is going on under the water.  Visibility is also aided by LED 2100 lights that illuminate both the work area and the area around the machine.”

Pupils from nearby Cluny Primary School named the new dredger and were given the opportunity to visit Buckie harbour quayside to see Lord Lieutenant of Banffshire, Clare Russell, smash a ceremonial bottle of Scotch whisky over the bow of the MV Selkie during the official naming ceremony.

The MV Selkie will be available to carry out dredging operations for other councils around Scotland’s coast in addition to dredging Moray harbours.