AB2000 has taken delivery of six new Liebherr cranes, taking the total number of mobile cranes in its fleet to 14. 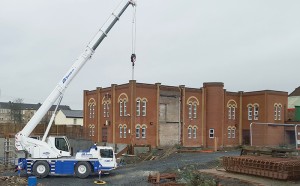 Liebherr describes the LTM 1040-2.1 as a compact 2-axle mobile crane with both axles driven and steerable ensuring “excellent” all-terrain capability and manoeuvrability on even the most confined sites.

The 35m long, continuously variable 4-section telescopic boom uses a hydro-mechanical telescoping system to extend to the required length quickly and the telescoping operation can also be performed under load.

The 70 tonne LTM 1070-4.2 is said to carry most of its counterweight in its road travelling configuration, which Liebherr says makes it immediately ready for operation on site.

The 5-axle LTM 1095-5.1 mobile crane reportedly has the longest telescopic boom in its class. In the UK, this 95 tonne crane can be run with an axle load of 16.5 tonnes, which enables it to carry all 23 tonnes of its ballast and still be within legal limits for travel on roads.

Liebherr says the purchase of the LTC 1050-3.1 compact city crane, the first crane of its type in the AB2000 fleet, opens up a “whole new range of projects” for the firm. Its single-operator elevating cabin gives the operator a “great view of the lifting area” making it more suited than other cranes to working on the dockyard loading ships, for example, as it has a better view of the cargo hold.