The trench support product was put to work on the the Kincardine Flood Reduction Scheme, which consists of upgrading the combined sewer network in Kirk Street and provision of storm attenuation in twin and triple 1,050mm diameter storage pipes 63m and 154m in length respectively.

The Drag Box extension is part of a new range of products, which also includes a 5m Trench Box and 5m Manhole Box, which Groundforce say have been designed specifically to cater for large pipe and chamber installations. 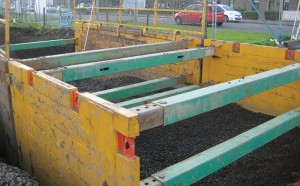 Groundforce said, “Morrison was required to install the storage pipes and, in addition, provide new bespoke in-situ concrete manhole chambers to carry the diverted flows and a new outfall back into the existing network.

“The system is designed to accommodate high levels of surface water run off, alleviating the risk of flooding to nearby residential properties, businesses and the nearby Tulliallan Primary School.

“The storage pipes were laid side-by-side in trenches up to 4.25m wide across parkland adjoining the school site.”

“We had the option of digging a wide cut and battering the sides of the excavation but that would have meant a lot of earthmoving and a large quantity of gravel aggregate to bed the pipes in,” he explained. “It was more cost-effective to dig vertical trenches and support the sides with equipment supplied by Groundforce.”

Measuring 7m x 2.8m, the Super Mega Drag Box is the largest in the Groundforce range.

However, on this project something bigger was required.

“The pipes came in 6m lengths and would only just fit within the Drag Box,” Drew added.

“We needed more clearance at either end to allow for adjustment and so our workforce could operate safely.”

Groundforce had the solution in the form of its newly-developed Drag Box extension, a modular component that bolts onto the standard unit. With this in place, the Drag Box measured 10m x 4.25m x 2.8m, providing plenty of safe working space.

“The solution was proposed by Groundforce area sales manager John Cowie, who told us about the new extension,” added Drew.

“I know John of old and he’s got good all-round experience and always gives us good guidance. After talking to him I decided to trial the Drag Box extension.”

The Super Mega Drag Box extension was developed in late 2015 in response to a trend among pipe manufacturers to offer their products in longer lengths.