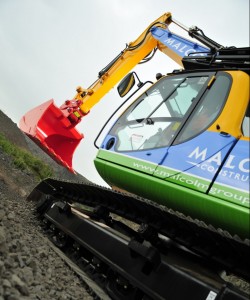 DRAINAGE works carried out for schools and hospitals across Scotland have benefited from Miller UK equipment.

The works have been completed by Malcolm Construction, with the two firms developing a business relationship which has spanned more than two decades.

Malcolm’s fleet has been bolstered by a  number of Miller’s hydraulic breakers, including a MGB0900 on its range of 14-tonne machines for general construction work and the breaking of drainage obstructions in a number of vital projects.

The firm used Miller’s MGB0260 compact breaker on its 3CX machines for bus stop replacement in the Glasgow area, while the larger MGB1600 was used on Malcolm’s 22-tonne machines for secondary breaking at its Milngavie and Beith quarries.

Miller also supplies Malcolm with Scoop buckets and PowerLatch couplers for its entire fleet, as well as hydraulic breakers for 20 per cent of its fleet, and Malcolm utilises the products for its own construction projects as well as hiring them out to third parties.

Miller said its PowerLatch coupler, with a patented automatic blocking system that ensures worker safety in the event of hydraulic failure, is an example of the “cutting edge innovation” that makes the company such a valuable partner.

Darren Gilmour, director of plant at Malcolm Construction, explained, “The reliability of Miller’s products is a major factor in our decision to use them so widely across our construction work.

“However, the excellent service and support we receive from Miller makes our lives infinitely easier.

“Their team possesses a detailed knowledge of our industry and their products are consistently updated to meet the demands of our work.

“Having worked with Miller for more than 20 years, we know we can rely on them to provide buckets, breakers and couplers that far outstrip any other products on the market.”