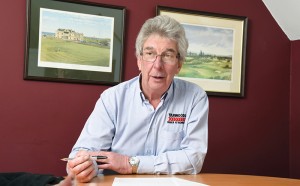 THERE’S not much Peter Yarwood hasn’t seen in over four  decades in the plant industry.

From his early days in the family business to taking the bold decision to go out on his own, Peter has been involved with a number of premium brands and turned Yarwoods into one of the country’s top hire, sales and repair firms for excavator attachments.

With major changes happening in the business, Peter tells Gary Moug about a career in plant, the characters he’s met and how he came to be shot at following one particularly memorable deal…

A) I left college and worked for my dad Eric (co-founder of the ECY Group) for a couple of months, had two accidents in their vans and they decided I was best learning somewhere else!

I got a job as an apprentice fitter with Buckton Contractors in Oldham and served my time there. I was one of the first people to do a City and Guilds plant fitter course. My claim to fame at Bucktons was that I was the only person who could reverse an onion/Cpat scraper box into the workshop with an ERF unit.

Being an apprentice was good fun, the guys used to take the mickey out of me. One of my endearing memories was spending lunchtime outside a pub on the high street where they’d chained me to a lamppost!

Q) What’s the history of Yarwoods?

A) I came to Scotland in 1977 to start ECY Scotland Limited for the family. That only lasted about five years because I then decided to get out the family business for various reasons so I bought that business off them and started Pater Yarwood Ltd. 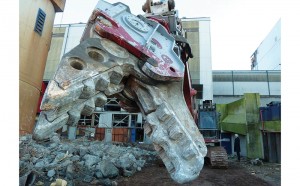 At that time we were a distributor for Montabert hydraulic hammers. Within a year we also took on the ESCO wearparts ground engaging tool franchise. We then piled on more stuff, as you do, until you realise the agencies that make you money are the ones you sometimes spend less time on because you try to bring others on and make them work.

We took on products we thought we could sell and wasted a lot of time on them instead of concentrating on what was selling. In some cases we were ahead of our time. We sold demolition processors, which we are now hiring, which have been asleep for 15-20 years.

We resigned the Montabert distributorship and started to import Rammer hammers into the UK for the first time. Rammer specialised in big hammers at the time so that was a good area to work in. Bill McFadyen gave us our first break with Rammer on the Luss bypass. Rammer then bought another hammer manufacturer and doubled their range, but we didn’t like the way it was stacking up. We liked where we were before so we spoke to Rammer and introduced them to somebody else who would take the hammer agency on. We just bought some hammers for ourselves and went into hiring.

ESCO had been growing and our sales to the opencast industry meant it was building into a real business by now. We had pretty much all the opencast in England and together with the two biggest granite quarries – Glensanda and Mount Sorrel – we became a big player in the ESCO market.

We moved to Caldercruix and rented part of the workshop to a welding and fabrication business, which went bust. We took on their guys and started doing welding and fabrication. We built buckets for the construction industry but there wasn’t much money in it due to the number of people doing it, but we had contacts via ESCO in the mines and in dredging so we set off after that market and had some fantastic business. But it was up and down and we closed that side of things down when the financial downturn came. 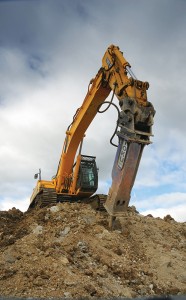 We were approached by Toku at that point. We’d been out of selling hammers for years and were a bit reluctant to take on something else. We went to Japan to take a look and I immediately loved the product. We started to import Toku, which has served us very well ever since.

Q) What does the future hold?

A) Peter Yarwood Ltd is now closed. There is a new company called Yarwoods Excavator Attachments Ltd, which started trading on February 1. Henry Brain is my new business partner who has bought into the business. It has a good financial base and has my attention for five years, at which point Henry will buy me out.

I’m planning to work a couple of days a week and Henry is the managing director.

Q) What have been your most memorable and challenging moments?

A) Doing business with Donald Malcolm was always good fun and something I’d look forward to. He was a great character, sat there behind his desk with the cigar going. He was a great guy who didn’t mince his words.

Our first order from Van Oord for a 34-metre bucket was also memorable.

In terms of challenges, telling my dad I wanted out of the family business was tough. He took it very well and respected it but I knew he wasn’t happy.

Another challenge was when we sold  a big bucket and forks to a customer in Angola. The country was involved in a civil war at the time. There was a problem so I travelled out there and got picked up at the airport. On our way from the airport to the ex-pat camp we got shot at. I don’t know if he was shooting at us or somebody else but all we saw was the muzzle flash and heard the bang. The driver shot off down the street.

Scottish coal going bust was bad and we struggled to make money that year. We knew it was happening and it was like we watched it in slow motion but could only try to manage the damage limitation.

Q) How has the industry changed since you first started?

A) It’s more professional. It’s becoming sanitised.  We are having to work in more regulated parameters. Don’t get me wrong, I’m the number one advocate for working safely and doing things correctly but I just have this concern that we are maybe doing a little bit too much in some instances.

This may be a bit controversial but if you train people and take danger out of a situation, how do people recognise it when they’re faced by it? It’s like taking antibiotics. You lose your self-defence to so many different things and I get concerned about that.

We’re building machines so well now that half the guys repairing them don’t have a clue how the engines and systems work. How do we deal with that?

Q) What would you change about the sector if you could?

A) I feel sometimes the industry is all a bit aggressive and short-term.

There are lots of people who fall on the right side of the line, and lots who fall on the wrong side. We’re trying to be a professional industry so treat people the same way. If you make an appointment to see somebody, be there when he turns up. If I travel 400 miles to see someone and he’s not there because he’s forgotten or can’t be bothered, I feel let down. By the same token, if you’re going to see someone, have something to say and something to sell. Sell what you’ve got, not just your price.

A) Loads. At my first CMPE dinner dance at Glasgow’s Central Hotel, I had to get up early because I promised Adam Bruce that we would fix a hose on one of his hammers. I got to bed at 3am, up again at 6.30am, fixed the hose, came back to the hotel for breakfast and Bob Lawrie and a couple of other guys were still on the Black Label in the lounge, so I joined them for one! That’s what happened in those days – late 70s/early 80s.

Billy Bain used to work for us and went to sell Martyn Ward a hammer. He told me the next day that part of the deal was that he had to take one of Martyn’s collie pups! To add insult to injury, the dog was sick in the car!

Q) How do you relax when you’re not working?

A) Eating, drinking, golf. I used to be a bit of a petrol head and still am to some extent. I sail and ski when I’m abroad.

Last year I built my own house in Strathaven. We fell in love with the site. There wasn’t a house there but there was planning permission for one. We didn’t like the plans so drew our own up and built it. What we’ve got now is a huge landscaping job, which is a work in progress.

Q) What can we expect from you at ScotPlant this year?

A) We’ll be announcing a new franchise and making a big noise about the new company. And more of the same.