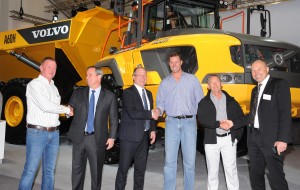 A South African plant hire firm has become the first customer in the world to place an order for Volvo’s eagerly awaited new A60H articulated hauler.

Burgh Plant Hire snapped up three of the machines – the industry’s largest ever 6×6-configuration articulated hauler – at the bauma trade fair in Munich.

The model was displayed on the indoor Volvo stand next to its ancestor ‘Gravel Charlie’ from 1966.

Burgh Plant Hire also placed an order for a Volvo EC950 excavator, which was also being launched at the event.

Stanley van der Burgh, CEO and owner of Burgh Plant Hire, said, “It feels great to be the first customer for the A60H. It’s a good product – a magic machine.”