Lomond Plant has taken huge strides since being founded in 1988. The firm was significantly impacted by the recession but is back on track and making inroads into the market down south. Gary Moug reports

Ross Easton says his “ultimate goal” would be for Lomond Plant to be the only operated plant hire firm with depots nationwide. That’s quite an ambition for a man who admits he had absolutely no interest in diggers growing up!
Ross and his sister Amanda are joint managing directors of the Falkirk-based business, which was started by their mother Sandra in 1988. Ross joined the firm five years later after leaving school. It certainly wasn’t a labour of love but, 23 years on, he’s taking a leading role in driving forward a firm which is now thriving and eyeing further expansion.
Much of the growth plans revolve around Lomond’s first English base, which has opened in St Helens and now has a fleet of almost 60 machines. In an ideal world, Ross would like to open more depots south of the border – which is all a far cry from the firm’s early days.
“My mum started the company with six second-hand excavators and four operators,” Ross recalled. “She remortaged the house and didn’t have any expectations of grandeur. She just wanted to make a living.
“My sister joined a year or two before me to work in the office. I joined in 1993 when I left school. I came to train as a plant fitter. I started at the bottom – my first jobs were sweeping the floor and cleaning windows.
“I was in the workshop until 1999. We’d bought a forklift truck company called Strathclyde Mechanical Handling. No one in the family was actively involved in that business so I left the plant side and went to work there for two or three years.
“In 2002 I started a construction labour-hire agency before I started dealing with plant a bit more from 2005/06.
“The company grew from strength to strength through to mid-2005. It did expand but it was gradual expansion. We didn’t sell the business too much; it was mainly through word of mouth. In the run up to the recession things were like that – it was busy out there so you got the work. Before the recession we were up to about 120 machines.”
In April 2008, Ross and Amanda were involved in a management buyout as their mother was looking to step down from the business. Unbeknown to them at the time, the global financial crisis was just around the corner. It was a massive baptism of fire as the firm was faced with no option but to dramatically cut costs and reduce staffing levels.
Ross explained, “When we were looking at the management buyout, it was before the recession was even a twinkle in the eye. It was all signed and sealed in April 2008. Six months later, the business started to see the effects of the recession. We had to start making redundancies. 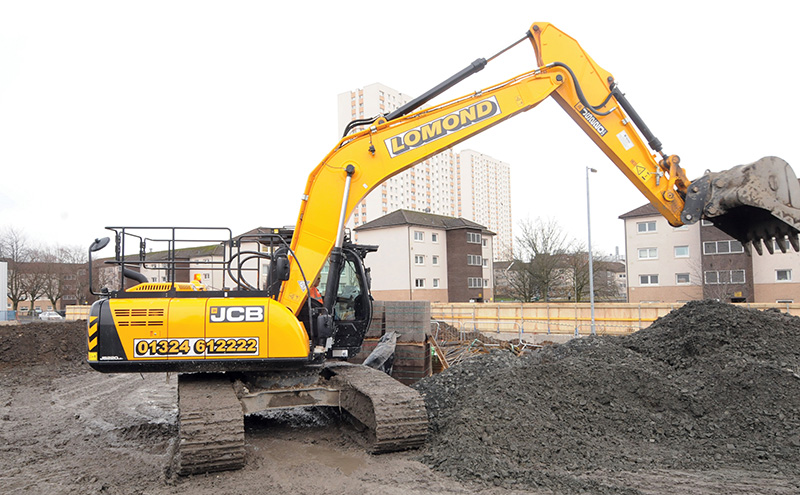 “Between October ‘08 and March ’09, the business halved in terms of staffing levels and turnover.
“You learn quickly. We had to make cuts to survive, and we did it pretty quickly. There were rumours that Lomond Plant was going bust because we were paying off guys. But we made the necessary cuts and we never made a loss. We never made a lot of money during that time but there was never a loss.
“(The recession) gave us a reality check as it made us focus on the business and look at things a lot more tightly. We started being more customer-focused, getting out there and seeing the customers face-to-face. We started looking at different products as well. Since 2009 we’ve brought in 20-tonners, rubber ducks, three-tonne dumpers, ride on rollers. We’ve increased the product range we offer as well as increased the fleet overall.
“2010 was significant year. We won a contract with Scotland Excel to get on the framework for contracts for councils in Scotland. We managed to get a contract with one of Scotland’s largest councils through it. They started with six JCB 3CX machines and became one of our top customers during that time, which was a huge help.
“I remember a time when the phone would ring and we’d start celebrating at getting a hire. That’s how bad it was. Before you took it for granted. During recession you just wanted to get your men back out working.  If you’ve ever sat in front of someone to tell them they’re losing their job, it’s horrible.” 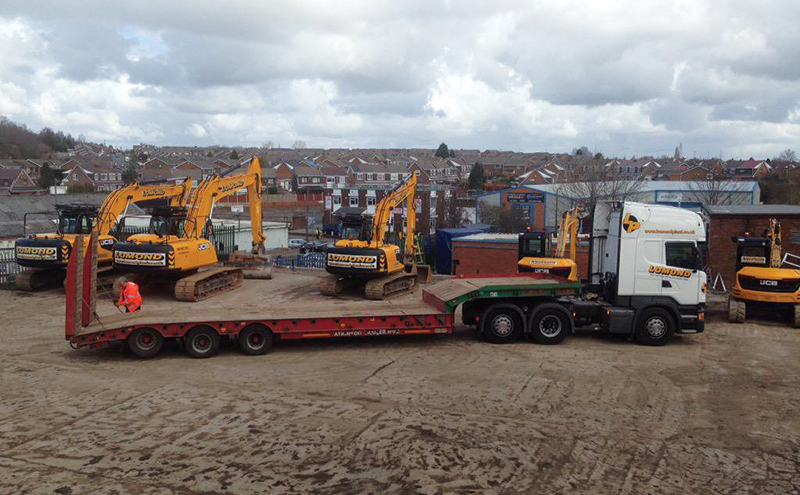 Ross says one of the best things about Lomond being a family business is the “small command chain” when it comes to making decisions. “It means we can make decisions a lot quicker,” he said. “Even though it’s a family business, each member of the family has got to bring something to the party. You see in a lot of family businesses that relatives get involved just to get them a job, but they’re not very good at it and it becomes a personal thing.
“Our uncle, James Moore, is finance director – a qualified accountant who’s very good at what he does. He’s been involved in the business since before I came. My sister handles the office side of things and the debtors. She deals with customers as well but she’s very good at keeping on top of the money coming in.
“I never grew up thinking ‘I love diggers’. I only started working here because it was a job – that’s the total truth. That’s how it started. I’ve never been a person who gets excited about machines. I get excited if I see a machine of ours out working. When I go home at night, I don’t even talk about diggers. I tend to try and leave it at the door. For a lot of family businesses, work is their life.”
Increasing the profitability at Lomond’s newest depot is high on Ross’s agenda. The St Helens base covers the North West of England and is now fully-stocked and staffed. In total, Lomond employs around 125 people – more than treble the numbers at the height of the recession. They are currently running between 230 and 240 machines – all of which are JCB.
“We were always known for JCB 3CX machines,” Ross added. “Pre-recession we had 40 of them and seven 13-tonners. Now our biggest product split is between the 3CX’s, 13-tonners and eight-tonners.
“Everything’s JCB. The reason we took that decision is because Scot JCB offers a fantastic backup service and they stuck by us during the recession. They were really good with us in terms of changing machines. Their parts distribution across the UK is great, particularly for St Helens. JCB are opening a satellite parts depot in my yard there to provide their engineers faster access to parts in the North West.
“We’ve worked with other manufacturers in the past but I like to keep things simple. I’m not a fan of having all different manufacturers in your fleet because then you’ve got to deal with different parts departments, different suppliers. Competition’s healthy, but so is having all your eggs in one basket if that supplier is doing a good job for you. We’ve been exclusively JCB for seven or eight years.
“I want to build the North West depot. It’s been primarily self-drive down there. I want more operating plant and to focus on making that depot make decent money and get it up to a sustainable level. It’s getting there.  Then we can look at other areas in England and emulate what we’ve done in the North West.”
Having spent more than two decades in the plant industry, Ross is ideally placed to offer his opinions on where the sector could improve.
Reducing health and safety paperwork and attracting more youngsters would be top of his list.
“The biggest thing is the amount of paperwork and bureaucracy that comes along with health and safety stuff,” Ross said. “There are far too many reports. It detracts you from running your business and doing day-to-day tasks.
“Trying to get young blood in is a big thing for everybody. When my mother first started, we trained a lot of guys. A lot of our long-term employees are guys we trained from scratch.
“We’re not in a position now to do that because everybody wants an experienced guy. That is a huge problem for the industry and a huge problem for us. We’re looking at ideas on how to combat that. I’m on the SPOA committee and we’re looking at things like a simulator and getting guys to train on that first and foremost.”
Despite those bugbears, Ross is generally positive about the outlook for the Scottish plant sector, though he concedes that the recession is still having a major impact on the way firms are now doing business. There’s a nervousness in the air – a “fear factor” that another downturn could happen.
“Last year was quite a funny year,” he said. “A lot of projects are going to be starting, work will be available, then you watch the news and think ‘Are we going to go in to another recession'”?
Before I leave, I ask Ross how Lomond Plant stands out in what is becoming an increasingly competitive field. “It’s about people – making sure you’re in front of the right people and building a relationship up with them,” he explained. “Our machines are new, which is great. But so are many of my competitors. You keep in touch with customers, get on with them and make decisions that can help them.”