A hillside residential development near Edinburgh has provided a stunning location for the first Bobcat T35130S 13 metre telehandler in the UK. 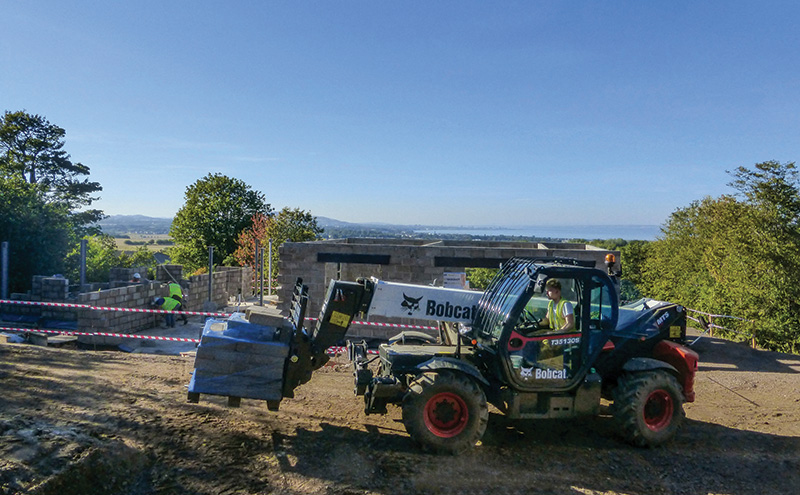 West Linton-based Fraser Joinery & Builders Limited hired the machine from MTS Group’s Cumbernauld depot and it has proved its worth in dealing with the rough terrain and steep slopes on the project.
Fraser Yule, managing director of Fraser Joinery & Builders, explained, “We are delighted with the performance of the new Bobcat telehandler. We have been using it to carry pallets and materials from the bottom of the steep hill up to the construction site where the new build is taking place, which would have been a much more difficult task using a smaller or less able machine.
“Later in the project, we will utilise the Bobcat telehandler to help install some of the larger joists and supporting beams for the roof of the house.”
The T35130S is part of the “substantial” investment MTS Group has made in new Bobcat equipment to meet increasing hire demands.
MTS Group runs one of the largest fleets of Bobcat equipment for hire in the UK and one of the biggest in Europe.
Bobcat said the T35130S 13 metre and T35140S 14 metre telehandlers have been designed to meet the needs of the construction and rental industries, with both models offering a 3.5 tonne maximum lift capacity.
A spokesperson for Bobcat said, “Particular attention has been paid to aspects such as the protection of sensitive parts, and intuitive and safe operating to meet the needs of rental users. The easy-to-use compact stabilisers ensure that the full capabilities of the new telescopic handlers can be utilised in the most confined working areas and close to walls (minimal loss of reach).
“As in other new generation machines, the T35130S and T35140S telehandlers offer advanced features such as the new Panoramic Cab which has a large parabolic windscreen providing panoramic visibility especially when handling loads at height.”